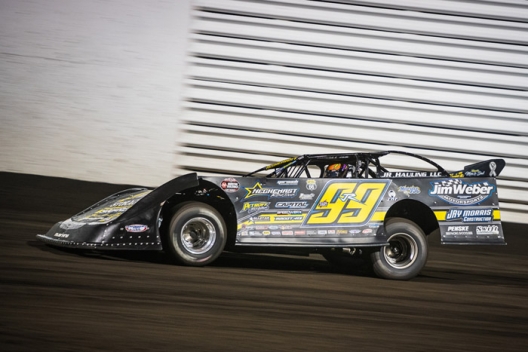 After chasing the second-starting Dillard for the opening 27 laps of Friday’s 40-lap feature, Heckenast of Frankfort, Ill., was in the right place at the right time when a broken right-rear wheel sent Dillard of Robeline, La., spinning out of contention. Hecknast inherited the lead and pulled away through the race’s final 13 laps to earn $10,000 for the second World of Outlaws victory of his career. His family-owned Rocket Chassis took the checkers 2.865 seconds ahead of points leader Brandon Sheppard of New Berlin, Ill., as the national tour opened its weekend doubleheader at Jackson’s 4/10-mile oval.

“That’s pretty cool,” Heckenast, whose previous WoO win came on Feb. 14, 2015 at Bubba Raceway Park in Ocala, Fla., said of winning on his birthday. “Track position was pretty crucial tonight. I felt like our car was pretty good. I was hoping we would go green flag there and Cade didn’t break because I thought it’d be a pretty good race. I don’t know if we would’ve won, but I think it would’ve been pretty close.”

Starting from the fourth position, Sheppard pressured Heckenast at times during the race’s middle stages when the two Illinois drivers were battling for second, but he couldn’t mount a serious challenge for Heckenast in the closing laps. He settled for second with Ryan Gustin of Marshalltown, Iowa, third.

Title contender Chris Madden of Gray Court, S.C., charged from 12th to finish fourth, while seventh-starting Brent Larson of Lake Elmo, Minn., finished fifth. Dillard, who went a lap down while his crew made repairs to his race car, ended up 12th in the final rundown.

Heckenast’s second overall victory of the season justified his decision to leave his home region during the middle of the DIRTcar Summer Nationals and head to the Upper Midwest to join the WoO tour for its 10-day, six-race stretch through Minnesota, Wisconsin and North Dakota.

“We were running that other tour for a while and just felt like we needed to do something different. Change it up and see where we’re at and try to get better,” said Heckenast, who managed two runner-up finishes while entering 10 of the Summer Nationals tour’s first 16 races but also struggled at times with an average finish of ninth in those events. “We kind of got away from everyone, kind of got away from the big crowds around home and went back to work on the race car and good things happened.”

Sheppard, the three-time and defending WoO champion who has led most of the way in this year’s title chase despite not performing up to his usual dominant level, was disappointed to fall short of a win, but saw positive signs heading into Saturday’s $20,000-to-win weekend finale at Jackson.

“I feel like we had a really great race car right there,” Sheppard said of his Rocket Chassis house car. “We gotta work on our restarts a little bit. I wasn’t really able to take off very good. My car’s locked to the ground really nice, I just couldn’t really take off that good. I don’t know if we gotta work on our carburetor or what, but definitely was a good run for us. We wanted to be one spot better, but we’ve got another night tomorrow and our car was really good, so everything’s looking promising.”

Debuting a new Rocket Chassis for car owner Dave Steine, the fifth-starting Gustin briefly took second from Sheppard on the race’s final restart with 12 laps remaining, but his car hit a rut and got airborne entering turn one on lap 35, allowing Sheppard to take the spot back.

“We had a pretty good car there. It just got really, really rough and we were giving it all we had there and almost tipped,” said Gustin, the WoO rookie contender who earned his fifth top-five finish on the tour this season. “Our floats were a little too high so we were kind of stumbling. We’ll get that fixed and we’ll give them hell tomorrow.”

Notes: Twelve of the race’s 18 starters were running at the finish with 11 cars on the lead lap. … The race took 23 minutes to complete. It was slowed by five cautions. … Madden’s fourth-place finish turned around what had been a frustrating night. He qualified mid-pack and finished sixth in his heat race. … Ricky Weiss of Headingley, Manitoba, ran as high as fifth before getting into the back of Larson and going for a spin on lap 28; he ended up 11th. … Chad Simpson of Mount Vernon, Iowa, won a heat race and started third in the feature. He was running third before having to pit with a flat right-rear tire under a 16 caution; he ended up ninth.