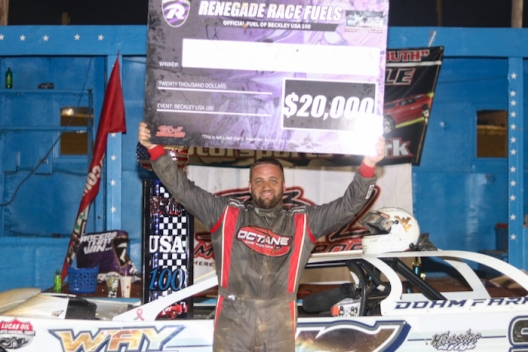 Blake Harris
Home-state driver Zack Dohm shows off his $20,000 paycheck.
What won the race: Seemingly coming from nowhere to steal the lead on a wild late restart, Zack Dohm of Cross Lanes, W.Va., led the final four laps of Sunday’s Beckley USA 100 feature at Beckley Motorsports Park to score a $20,000 victory in the unsanctioned Fourth of July special. Dohm was the fifth driver to lead in a marathon race that saw multiple contenders suffer flat tires.
Key notes: The race didn't start until 11:45 p.m. and took more than 90 minutes to complete. ... Kyle Bronson, Jonathan Davenport and Tyler Erb all led laps only to suffer flat right-rear tires. Tim McCreadie ran second for much of the way until also suffering a flat right-rear late in the race. ... Erb took the lead when Bronson slowed with a flat on lap 14 and held it until Davenport went by on lap 32. ... Davenport led until the wild lap-95 restart that saw Jacob Hawkins edge ahead to lead lap 96. Contact between Hawkins and Davenport sent both cars up the track and allowed Dohm to sneak by on the bottom. ... Davenport suffered a flat right-rear tire during a lap-98 caution and gave up the second spot. ... Although there were no serious accidents, the race was slowed by at least 13 cautions and saw multiple red-flag periods. ... The unsanctioned event was originally scheduled to be sanctioned by the Valvoline Iron-Man Racing Series, but was switched to unsanctioned because of a conflict in fuel sponsorships between the track and series. ... Iron-Man officials replaced the event with a $5,000-to-win race at Lake Cumberland Speedway in Burnside, Ky.
Winner's sponsors: Dohm’s Longhorn Chassis is powered by a Vic Hill Racing Engine and sponsored by Dohm Cycles, Octane Race Products, Way Floor Covering, Jen’s Hair Care and Mountain Top RV Park.
Current weather: Clear, 72°F
Car count: 22
Heat race winners: Tyler Erb, Kyle Bronson, Mike Benedum
Editor's note: Results and race details are unofficial.
From track reports

BECKLEY, W.Va. (July 4) — When flat tires for both Tyler Erb and Tim McCreadie late in Sunday’s Beckley USA 100 feature moved him to third for a lap-95 restart, Zack Dohm started to think that luck might be on his side in the closing laps of Beckley Motorsports Park’s unsanctioned $20,000-to-win race.

When Dohm of Cross Lanes, W.Va., saw second-running Jacob Hawkins throw a bold slider at leader Jonathan Davenport once the race went back green, he really started to believe things were about to go his way.

“I saw Jake get in there under Davenport and my eyes lit up when that started happening,” Dohm said in describing his view of the battle. “I knew what was about to happen. It played out just like I figured it would, and thank God it did.”

Indeed it did appear that Dohm knew exactly what was going to result from the battle between Hawkins of Fairmont, W.Va., and Davenport of Blairsville, Ga. And when the two cars made contact in turn one on lap 97 sending both of them up the track, the low-running Dohm was right where he needed to be to take advantage.

Dohm ducked under the two leaders and pulled ahead to take the point exiting turn two. After more contact between Hawkins and Davenport on the next lap caused a ripple effect that led to fourth-running Tyler Carpenter of Parkersburg, W.Va., and fifth-running Erb of New Waverly, Texas, tangling and spinning on the front straightway, Dohm was out front for one final restart with two laps remaining.

With Davenport’s right-rear tire going flat during the caution, Hawkins was essentially the only one left to challenge Dohm for the lead during the dash to the finish — Erb restarted third but with damage from the tangle with Carpenter. Hawkins looked to the outside of Dohm on both of the final circuits, but he didn’t have enough to attempt a pass, and Dohm held on to pull off the surprise victory.

“We had a pretty good car, but I just couldn’t make myself by as aggressive early as I need to be in these races,” Dohm said of his early struggles in the marathon race that lasted more than 90 minutes. “But I’m glad it worked out. Twenty grand, that’s pretty good.”

Dohm was the last of five drivers to spend time out front. Second-starting Kyle Bronson of Brandon, Fla., led the race’s first 14 laps before a slowing with a flat right-rear tire and giving the lead to pole-starting Erb, who was out front until fourth-starting Davenport moved ahead on lap 32.

With Davenport out front, it appeared as though the three-time Lucas Oil Late Model Dirt Series champion might pull away to the victory. However, Hawkins had other plans, and after taking second from McCreadie on a lap-81 restart, moved to challenge Davenport.

Two cautions in the closing laps — one for Erb’s lap-86 flat tire and the other for McCreadie’s flat on lap 95 — gave Hawkins his best shots at Davenport. He took advantage of the lap-95 restart and used an aggressive move to edge ahead of Davenport and lead lap 96, but Davenport battled back and the two cars went door to door on lap 97, making the contact that allowed Dohm to pull ahead and take the win.