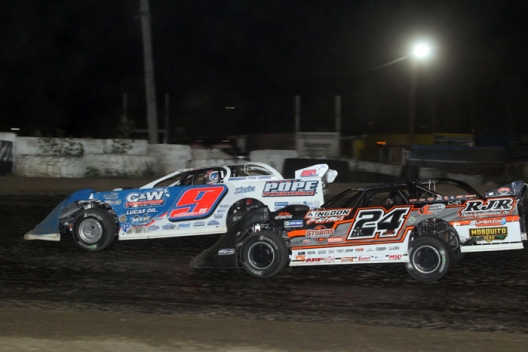 KANKAKEE, Ill. — On the DIRTcar Summer Nationals, it helps to have the racing gods on your side.

And that's where Devin Moran of Dresden, Ohio, found himself Thursday at Kankakee County Speedway, getting a timely caution to survive a challenge from polesitter Tanner English, then narrowly fighting off Ryan Unzicker's pressure in the final laps for a $5,000 victory.

Moran ended the two-race winning streak of series points leader Bobby Pierce of Oakwood, Ill., and tallied his second career series victory while taking the checkers a half-second ahead of Unzicker at the checkers.

"To be honest, I don't know if I should've won," Moran admitted in victory lane. "That caution came out right when Tanner got by me. I actually drove in too hard and got into him. That car was stuck up there (and drew a caution) but the racing gods or someone was looking out for us tonight.

"(The surface) started rubbering and I just kept moving down a little bit. I probably should've just went to the very bottom, because I didn't think anyone could've passed (on the outside). I was just so free when I went down there. But we got our first Summer Nationals win of the week, so that's pretty cool."

Unzicker, gunning for a victory after leading most of Wednesday's series event at Peoria (Ill.) Speedway, settled for second with Brian Shirley of Chatham, Ill., crossing the line third. Shirley, however, was disqualified for failing to report to the scales postrace, elevating Pierce to the third spot with Benton, Ky.'s English in fourth. Former Kankakee series winner Frank Heckenast Jr. of Frankfort, Ill., ended up fifth.

Moran got the jump on English from outside the front row and led by two seconds after just five laps, but as the frontrunners entered traffic English closed in and began showing strength on the high side.

Moran's moves in lapped traffic kept English at bay, but the battle tightened as the race entered the second half of the race, and English's backstretch charge on the outside edged his car slightly ahead of Moran on lap 27 heading into the turn three.

The cars of the frontrunners were hung up with Shirley slipping underneath both of them, but Mike Provenzano had gotten into the turn-four wall, drawing a caution that erased Shirley's move and put Moran back in front for the restart.

English got the worst of the ensuing restart, slipping back to fifth as Shirley grabbed the second spot, but it was Shirley losing a spot on a lap-29 restart as the fifth-starting Unzicker began pressuring Moran heavily in the low groove.

Unzicker was just under Moran's left-rear quarterpanel in virtually every corner the rest of the way, pulling fully alongside exiting turn four on the 35th lap with the frontrunners crossing under the flagstand at a near dead heat with Moran inches ahead.

Unzicker took a few more shots at Moran, but the race-long leader held on in the final laps.

"Really, we didn't do a ton to the car," Moran said. "This Tye Twarog Racing Longhorn was pretty good all night. You know, (we set) fast time and won our heat. We just did a little bit of adjustment. They tried working the track, but I think it was just a little too dry from the start. At least they tried. We'll definitely take it and move on to tomorrow."

Unzicker wanted the victory, but he made sure to avoid contact in chasing Moran in the final laps.

"Any time you're up underneath a guy like that, you're like, 'I've got it' ... you're always licking your chops just to get a tire under him," Unzicker said. "We were able to get a run and get up underneath of him. I could've dirtied him. I'm not going to lie, I'm hungry for a win. I could've pushed up in there and got him out of the groove. But at the end of the day, I don't race like that. Never have, never will. And I wouldn't want my guys to have to redo the right front (and body) tomorrow and make us work extra hard. We'll take (second) and we'll run."

Notes: Moran's previous series victory came June 29, 2018, at Terre Haute (Ind.) Action Track in an event co-sanctioned with the World of Outlaws Morton Buildings Late Model Series. ... Besides the lap-27 caution for Mike Provenzano, the only other yellow fell on lap 29 when Glen Thompson's car came to a halt at the top of the frontstretch. ... Thirteen drivers completed 40 laps. ... Taylor Scheffler of Waukesha, Wis., ran fourth in the first half of the race but was shuffled back at halfway and retired a few laps later. ... Austin McCarty of Bradley, Ill., won the night's Crate Late Model feature, the first of his career.

Polesitter Tanner English of Benton, Ky., is chasing his second career DIRTcar Summer Nationals wins. His previous victory came July 3, 2018 at Clarksville Speedway, a bullring English considers one of his home tracks. … Outside front row starter Devin Moran of Dresden, Ohio, is chasing his second career Summer Nationals win also. Moran’s previous win was June 29, 2018 at Terre Haute (Ind.) Action Track in an event co-sanctioned by the World of Outlaws Morton Buildings Late Model Series. … Frank Heckenast Jr. of Frankfort, Ill., has five career Summer Nationals wins, including three last season. Heckenast, who is making his first series appearance this season, won series races at Kankakee in 2020 and 2015. … Oakwood, Ill.’s Bobby Pierce winner of the first two races this season, starts 10th, the first time he hasn’t started on the front row. … Former Kankakee winners in the starting lineup include Heckenast, Pierce, Shirley and Mike Spatola. … Five provisionals were given out, three by DIRTcar (Tim Lance, Rusty Griffaw and Joe Godsey) and two by the track (Glen Thompson and Torin Mettille), bring the starting field to 23 cars. … Dean Carpenter had motor trouble in his heat and scratched for the night. … Tim Lance Jr. missed his heat when he failed to get his tires marked. … Mitch McGrath didn’t make the feature after losing his left front wheel on the warmup lap of his heat. McGrath finished fifth in the consolation race, two spots short of transferring. … With Shanon Rush, Oval Track Dirt Product Manager for Hoosier Tire on hand to address drivers, there was much talk during Thursday’s drivers’ meeting about a seemingly unavoidable shortage of Hoosier Tires. The series is already limiting competitors to five tires per event and may soon go to a four-tire limit while also exploring other compound options if necessary to keep the tour moving along.