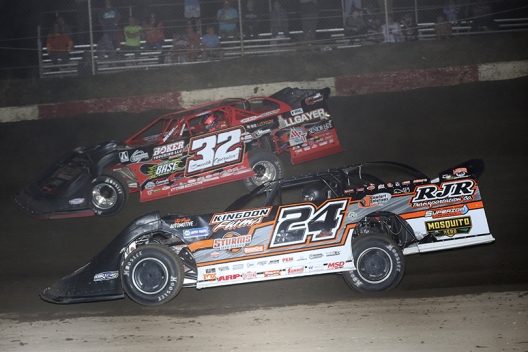 PEORIA, Ill. (June 16) — Bobby Pierce is off to a red-hot start on the DIRTcar Summer Nationals.

It was the second $5,000 triumph in as many evenings for Pierce, who kicked off 2021’s super-sized 36-race series with a victory Tuesday at Brownstown (Ind.) Speedway.

“I’m not Brandon Overton, but 2-for-2 so far is pretty good,” Pierce said, referring to the Georgia driver who swept all four nights of the June 9-12 double Dreams at Eldora Speedway in Rossburg, Ohio. “Hopefully we keep it going.”

Pierce’s hard-fought victory in the caution-free headliner came by 1.101 seconds over reigning Summer Nationals champion Brian Shirley of Chatham, Ill., who slipped past Unzicker for second on lap 33 but wasn’t able to mount a serious challenge on Pierce. Unzicker settled for a third-place finish after leading laps 1-31 while Tanner English of Benton, Ky., placed fourth and Devin Moran of Dresden, Ohio, was fifth.

At points during the race’s middle stages, the top-four cars — Unzicker, Pierce, Shirley and Moran — ran close together through lapped traffic with English just a couple car lengths behind. Pierce was able to pull away slightly once in command, but the battle behind him remained tight and English snatched fourth from Moran on the next-to-last circuit.

The polesitting Pierce was outgunned his front-row mate Unzicker for the lead at the initial green flag. The three-time Summer Nationals champion the relentlessly chased Unzicker, looking high and low to make a pass on the quarter-mile oval.

After Pierce’s slider attempt off turn four on lap 25 was countered by Unzicker’s crossover move to maintain command, Pierce settled into a top-side bid. His winning maneuver came when he surged to the outside of Unzicker heading down the backstretch and was in the lead for good as lap 32 was scored.

“My dad kind of gave me the idea,” Pierce said when asked about running the outside. “He showed me with the (signal) sticks there to possibly try it out, (but) I mean, I wasn’t gonna ride in second, that’s for sure. I was gonna end up trying it."

Shirley said he was commited to the top late in the race also.

A dejected Unzicker regretted not moving up the track as well.

“I don’t know. I just never would have guessed that (the preferred groove) was that high. When my stick guy was telling me to go up and was telling me it was up top, I figured it was the middle or just that top little momentum line. I just picked the wrong time to stay down there I guess. I don’t know. I kinda feel dejected right now to come home third. I would have felt a lot better if (Shirley had not) got by me.”

Pierce was simply biding his time, searching for an opening.

“Ryan was doing a good job," said Pierce. "I could tell he was watching his (crew) guys too, and anytime I got some momentum built up on the top he would move up to the middle and block a little bit. Hopefully I raced him clean. He left the door open and I decided to shoot in there … after I gave him a love-tap to let him know I was there a little bit.

“I think his tires kind of went away a little bit,” he added. “Luckily it stayed green for a long time and we were able to pull it off.”

Pierce hailed the Peoria track surface for providing the conditions for a “fun race.”

“This place always provides tight racing, and tonight the track was phenomenal. I was kind of worried earlier how the top was crowning off, but it ended up being a perfect racetrack. We could race about anywhere and make moves. To do that on such a tight track, hat’s off to these guys at Peoria.”

Notes: Pierce recorded his 29th career Summer Nationals victory — breaking his tie with Scott Bloomquist for fifth on the circuit’s all-time win list — and became the fourth driver and first in 11 years to capture the first two events of the Hell Tour. The hot start puts him alongside Billy Moyer (winner of the first two races in 1993, first six in ’94 and first three in 2010), Bloomquist (first four in ’90) and Dennis Erb Jr. (first two in ’07). … Pierce previously won Peoria's Summer Nationals event in 2016. ... Wisconsin’s Paul Parker slid past English to reach fourth on lap six, but he slipped out of the top five by lap 11 and finished ninth. … The nonstop feature was completed in just under 10 minutes and ended at 10:37 p.m.

Wednesday’s 40 entries is tied with the 2008 event as the fourth most DIRTcar Summer Nationals entries at Peoria in the last 14 years. The 2015 race, won by Shannon Babb of Moweaqua, Ill., drew 48, the most over the last 14 seasons. Next were 2010 (44) and 2012 (41). … Brian Shirley, Jason Feger, Bobby Pierce and Billy Moyer Jr. are the only four drivers signed in Wednesday who have a previous Summer Nationals win at Peoria. … Pierce, of Oakwood, Ill., isn’t using the same car he won with on Tuesday at Brownstown (Ind.) Speedway, opting instead to pull out his fresher machine that he hopes is more suited to shorter tracks. … Shirley, of Chatham, Ill., is attempting to become only the second four-time Peoria Summer Nationals winner. There’s 15 years between Shirley’s first series win here (2004) and his last (2019). He also won the event in 2012. … Only one father-son duo has won in Summer Nationals competition at Peoria and oddly enough, they are not named Pierce or Sheppard. Instead Hall of Famer Billy Moyer (2001) and his son Billy Moyer Jr. (2017), both of Batesville, Ark., each have a single Summer Nationals win at the third-mile oval. … Feger’s only Summer Nationals win at Peoria came in 2009 and was also the first career Super Late Model triumph at Peoria for the Bloomington, Ill., driver, who was prolific in the track’s sportsman division in his younger days. … Six of 24 drivers — Devin Gilpin, Chad Finley, Richard Frost, Jared Bailey, Britan Godsey and Brayton Laster — who entered Tuesday’s opener at Brownstown are not entered at Peoria. … Thomas Hunziker of Bend, Ore., had to replace the transmission in his new Rocket Chassis during the day Wednesday after experiencing trouble with the piece Tuesday at Brownstown. … Peoria’s Allen Weisser had trouble during time trials, getting his No. 61 machine almost on its lid after hitting a hole and folding the nose under. The damage to the new car ended his night. ... Allen Murray broke a driveshaft after hitting the wall during qualifying. With Rick Eckert crewing for him, the team made repairs, and Murray managed to climb from 10th to fourth in the consolation race, but was still two spots shy of tranferring to the feature.