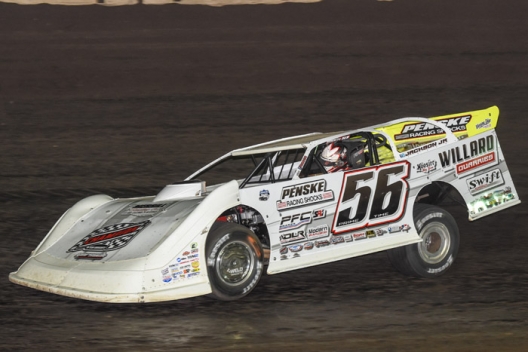 Cruising to his second series victory in as many nights and his third on the tour this season, Jackson led every lap of Friday’s River City Rumble feature at Mississippi Thunder Speedway to earn a $10,000 victory during the second leg of the Lucas Oil Midwest LateModel Racing Association’s tripleheader weekend. Jackson, who also won Thursday’s MLRA weekend opener at Maquoketa (Iowa) Speedway, claimed Friday’s feature by 1.076 seconds over runner-up Jeremiah Hurst of Dubuque, Iowa, in claiming the first five-figure race victory of his career.

“I’ve led so many of these races and just never could seal the deal,” said Jackson, the 2013 MLRA champion who also counts five MARS Racing Series titles among his career accomplishments “What a race car. Man, that was fun to drive.”

Starting from the inside of the front row, Jackson pulled to the lead on the race’s initial start over fellow front-row starter Jimmy Mars of Menomonie, Wis. As Mars faded in the first half of the 50-lap race, Jackson flexed his muscle by pulling to a comfortable margin over second-running Mason Oberkramer of Broseley, Mo.

But Mars, who at one point dropped all the way back to seventh, came to life as the race wore on and recovered to move back to second by lap 23. Mars chased Jackson through the race’s middle stages and made a couple of high-side bids for the lead on restarts, but Jackson stayed glued to the track’s bottom groove and pulled away each time.

“I like the bottom,” Jackson said of his commitment to the track’s low line throughout the race. “I will do the top, but we are just really good on the bottom. It’s good when you unload fast.”

Mars eventually dropped out of the race when he slowed to bring out the race’s fourth and final caution with 39 laps complete. That paved the way for a much relieved Jackson to cruise to the victory in the race’s final 11 laps, easily beating the second-place Hurst to the finish. Seventh-starting A.J. Diemel of Elk Mound, Wis., finished third, while Jake Timm of Winona, Minn., charged from 23rd to finish fourth and Oberkramer settled for fifth.

With the veteran Mars lurking behind him for much of the distance, Jackson found himself frequently praying for divine intervention to keep him out front.

“He’s obviously one of the best race car drivers there is,” Jackson said when asked in victory lane if he was nervous with Mars behind him. “I said so many prayers that God was probably like, ‘Seriously, it’s going to be OK.’”

The fifth-starting Hurst was also looking for both his first MLRA victory and his first $10,000 race win but was denied both in finishing second.

“I feel one coming,” said Hurst, who claimed the MLRA championship in 2020 despite not visiting victory lane with the tour. “Hopefully it’s sooner rather than later, but I’m tickled to death tonight. The track, I knew it was gonna kind of take rubber there. I was just trying to hold my own … but they (crew members) said I have plenty of tire left so I probably should’ve gave it some more.”

Running a softer tire compound than most of the other front-runners, Diemel was happy to end up with a podium finish.

“Those guys were just a little bit better,” said Diemel, who was making a rare MLRA appearance and looking for his first series victory. “The tire rule we had to play with a little bit here. That 40 tire (Hoosier LM-40 compound) was really what you needed to have on something like that, but on the restarts we could kind of make it interesting being a little softer (on tire compound).”

The race’s first caution waved on lap 21 when 10th-running Chad Mahder of Bloomer, Wis., spun exiting turn two. The pace was slowed again on the next lap when Earl Pearson Jr. of Jacksonville, Fla., slowed from the eight spot with a flat right-front tire.

Chad Simpson of Mount Vernon, Iowa, brought out the race’s third caution with 26 laps compete when he slowed with front-end damage to his machine. The fourth and final caution appeared for Mars on lap 39.

Notes: Jackson earned the 10th MLRA series victory of his career. He also has 19, MARS Racing Series wins, 10 Comp Cams Super Dirt Series victories and three triumphs on the National Championship Racing Association. … Fourteen of the race's 24 starters were running at the finish. ... Racing at his home track, provisional starter Jake Timm of Winona Minn., impressed with a charge from the 23rd starting spot to finish fourth. … The Missouri-based MLRA tour made its second ever appearance in Wisconsin. The first came in 2019 at Beaver Dam (Wis.) Raceway.