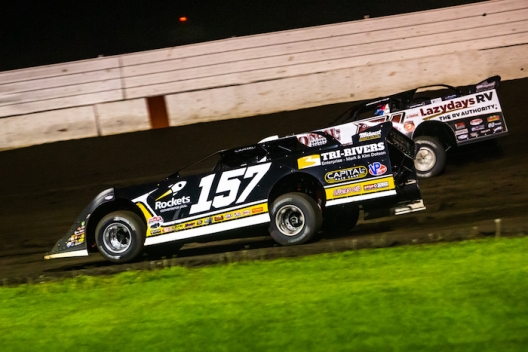 FARLEY, Iowa (May 21) — Surviving a treacherous surface that wreaked havoc on the nose pieces of many of the event’s 24 starters and cut down the right-rear tire of Kyle Bronson’s dominant machine with just three laps remaining, Mike Marlar of Winfield, Tenn., ended his season-long winless streak with a $12,000 Lucas Oil Late Model Dirt Series victory Friday night at 300 Raceway.

The fourth-starting Marlar appeared headed for a runner-up finish in the first leg of Lucas Oil’s weekend doubleheader in Iowa until the pole-starting Bronson of Brandon, Fla., gave up his race-long lead and headed to the pits under the lap-47 yellow. Marlar then pulled away in final run to the finish, taking the checkers 1.237 seconds ahead of runner-up Tyler Erb of New Waverly, Texas, in a race that was slowed by 12 cautions and saw only seven drivers make it to the end.

“That was a hard-earned one. I don’t know how it worked out, but we got her,” said Marlar, whose first Lucas Oil Series win of the season also gave him his first victory of any kind since September. “We needed that. My team needed it. We’ve been struggling this year, hit and miss. Run second, then run 25th. To have a good finish there was nice tonight. My team deserves so much and my car owner and everyone involved here. They put so much into this.”

Along with giving him his first first victory of the season, Marlar’s winning performance validated his team’s recent mid-season chassis switch to Capital Race Cars.

“Obviously it’s working out good,” Marlar said of his team’s move to Capital. “Thanks to (Capital founder) Marshall (Green), Penske (Racing Shocks) and StopTech (Brakes) and everyone that jumped in there at the last second and helped us. I don’t think we would’ve reached victory lane without them.”

With his runner-up finish, Erb recorded his first podium finish in series action since winning the final night of East Bay Raceway Park’s Winternationals in January. But combined with his two-victory weekend in non-series action May 14-15, Friday’s finish shows Erb and his Best Performance team are on the right track with their Rocket Chassis entry.

Like Marlar, Erb had to work hard to get the much-needed solid finish, including avoiding the fate that befell so many drivers on Friday’s rough surface while battling hard with Bobby Pierce of Oakwood, Ill., for position late in the race. Erb’s aggressive tactics in that back-and-forth battle worried his crew chief Randall Edwards.

“I was trying to be patient. Randall was throwing the (signal) sticks over there telling me to try and miss all the ruts and try to keep the nose on it,” Erb said. “It was exciting for me, so I’m sure it was exciting to watch. We’ll give it another go (Saturday at 36 Raceway) and see what we can do.”

Despite his heartbreaking fall from the lead, Bronson still ended up with a third-place finish after a confusing turn of events. With only five cars on the lead lap for the lap-47 restart, Bronson restarted fifth in line and ended up taking the checkers in the fourth spot. But he was penalized one position for jumping the restart giving him an apparent fifth-place finish.

But Bronson's fifth-place finish then turned into a third-place result after apparent third-place finisher Bobby Pierce of Oakwood, Ill., and apparent fourth-finisher Chad Simpson of Mount Vernon, Iowa, were placed 22nd and 23rd in the finishing order after failing to meet legal postrace weight.

The race started ominously for Lucas Oil Series points leader Tim McCreadie of Watertown, N.Y., when the right side of his nose piece folded under his car and forced him to the pit area on lap four. He missed the initial attempt to restart the race, but another quick caution allowed him to remain on the lead lap once his crew finally made repairs and sent him back on the track.

McCreadie never got back up to full speed and made more pit stops under later cautions. Still, he ended up sixth in the initial finish and fourth in the final results. He also benefitted from both of his closest points challengers suffered problems of their own late in the race.

Hudson O’Neal, who entered the race second in points, was in line to make a substantial gain until he slowed from the third spot causing the lap-48 caution; he ended up sixth in the final rundown. Third-place points man, Jonathan Davenport of Blairsville, Ga., also ran into trouble, retiring on lap 20 after running as high as fifth; he ended up 11th.