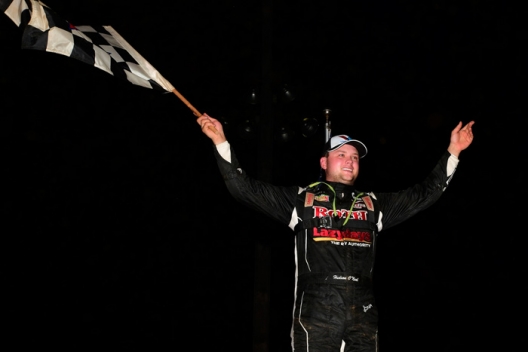 BROWNSTOWN, Ind. — Polesitter Hudson O'Neal and sixth-starting Scott James both felt like they made costly mistakes in the final laps Saturday at Brownstown Speedway. O'Neal's was about $5,000 less costly.

The race-long leading O'Neal of Martinsville, Ind., narrowly turned back the last corner charge of Bright, Ind.'s James at the quarter-mile oval for a $10,000 victory on the Valvoline Iron-Man Racing Series at his home track.

James settled for a $5,000 runner-up finish, just 0.126 of a second behind at the checkers while reigning track champ and current points leader Devin Gilpin of Columbus, Ind., was third. Darrell Lanigan of Union, Ky., was fourth and Joe Godsey of Edinburgh, Ind., rounded out the top five in the 50-lap Hall of Fame Classic.

Tyler Erb of New Waverly, Texas, held the second spot for 34 laps, but a turn-one scrape with James and Lanigan dropped him from third to fifth on lap 41, and he retired three laps later.

O'Neal led comfortably most of the race, keeping Erb in check through lapped traffic and maintaining an edge when Gilpin got rolling on the high side after a lap-34 restart and reached the second spot.

The lower-running James fought his way to second in the final five laps and was six-tenths of a second behind, but slowly made up ground — the biggest chunk on the last lap — before falling just shy as the frontrunners took the checkers with a lapped car.

"I definitely wasn't much better than them guys," O'Neal admitted in victory lane. "I made a mistake coming to the white flag in (turns) three and four and about gave it away. Man, what a race, and what a race with Scott James. Whenever I was coming off (turn) and I seen him under me, I was just looking for every bit of traction I could find, and I just ran off the straightaway to try and find some."

James, who was leading Brownstown's previous special when he lost fuel pressure, said he "missed the corner with two (laps) to go down into (turn) three and I got loose getting in (the corner), and that gave him that car length that I needed," he said. "It was my bad. I just missed the corner, you know? It's so hard to run around those (infield tire barriers) and be precise every lap."

But James was holding his head high after finishing behind the 20-year-old O'Neal and ahead of the 30-year-old Gilpin in a dramatic finish.

"I'm thrilled to death. Hudson's a great race car driver, a great kid. And Devin, man, to be sandwiched between these two talented young kids. I turn 50 in two months and if you add their ages up they probably ain't 50," James said. "But I'm ready to race, and my guys are ready to race. I think we're going to be pretty good the rest of the year. So we'll see, and I'm excited."

Gilpin was licking his chops when he went from fifth to second on the restart with 16 laps remaining.

"They just left me the top wide open and this cushion got brutal down here. The longer the run went on, the harder it was to hit it the way I needed to hit it. But man, that was heckuva race. You fans got your money's worth tonight," Gilpin said, adding that "we're going to get a big one here soon. We're rolling. Man, that Hudson O'Neal is just a heckuva driver, he's a chip off the old block, he gets up on that wheel and drives that thing."

O'Neal, the son of former Brownstown veteran Don O'Neal and a former Jackson 100 winner at the famed fairgrounds oval, was glad to get back on track after struggling at Brownstown in recent visits.

"The last year here, ever since I've got these Rockets, it just seems like I just could never really get a hold of this place real good. We tested here earlier in the spring and I felt like we found a little bit of something and it definitely showed," he said. "I'm just happy that I'm able to come full circle here at this place and be able to be competitive again. There's nothing like being good here and winning in front of these amazing fans."

Notes: O'Neal also won on the Iron-Man tour earlier this season at Smoky Mountain Speedway in Maryville, Tenn., the track owned by his car owner Roger Sellers. ... A dozen drivers completed 50 laps. ... Jensen Ford had to take a provisional after clipping an infield tire in heat action and folding his car's nose under. He retired after 11 laps in the feature ... Jason Jameson of Lawrenceburg, Ind., made his second start for Hatcher Motorsports as a teammate to Dustin Linville. ... Valvoline Iron-Man Racing Series announcer Michael Despain, late chassis builder Butch Tucker and former bomber racer Bobby Johnson were inducted into Brownstown's Hall of Fame.