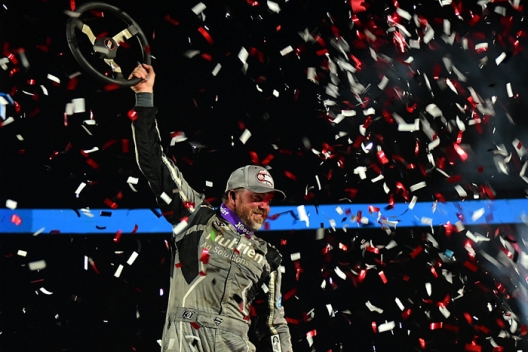 NEW RICHMOND, Wis. — After his crew helped him get his car dialed in during preliminaries, Jonathan Davenport didn't want to disappoint them during the 34th annual USA Nationals at Cedar Lake Speedway.

"They done a helluva job," the Blairsville, Ga., driver said. "I just knew I had to get up on the wheel and not let 'em down."

In patiently picking his way to the front of a rough-and-tumble event to lead the final 12 laps for a $50,000 World of Outlaws Morton Buildings Late Model Series victory, Davenport didn't let down his on-site crew members — Matt Langston, Clint Campbell and Vinny Guliani — and neither did he let down MIA crew chief Jason Durham, back in Kentucky to be with his ailing father.

"This one here's for you buddy," Davenport told Durham in victory lane. "We definitely miss you and wish you was here. I was thinking about you and your dad those last 10 laps."

For Davenport, the last 10 laps were about the calmest of a wild and wooly race that included Kyle Bronson's cushion-busting run out front, a dozen cautions of all shapes and sizes along with just 10 of 27 starters running at the finish.

All that coming one night after Davenport was briefly knocked unconscious by a mud clod that struck his helmet during Friday's double-heat programs.

Davenport was thrilled to hoist Cedar Lake's unique, wood-carved eagle trophy in victory lane — and pocket one of the season's biggest paydays — like he did in winning the event for the first time in 2015.

"I'll tell you what, this place is awesome to come to," Davenport said. "I hadn't gotten to come in a couple of years, but I made a trophy hunters shirt, and that trophy right there was the first one I thought of to put on it. So it's definitely a special place."

Davenport, who started 11th but didn't break into the top five until halfway, took the checkers 1.188 seconds ahead of runner-up Brandon Overton of Evans, Ga., while early leader Ashton Winger of Hampton, Ga., gave Georgia a sweep of the top three finishing positions after he dueled with Davenport on late-race restarts.

Sheppard wasn't the only contender to run into problems in a race capping a wet weekend that provided a heavy racing surface.

Bronson, who led laps 4-88, repeatedly struggled with the turn-four cushion, once getting into the wall and twice getting sideways before a lap-92 flat tire finally sent his battered car off the track.

Jimmy Owens of Newport, Tenn., was running second on lap 79 when his car came to an abrupt stop on the frontstretch, knocking him out of the race with obvious problems underneath his car.

And Ricky Weiss of Headingley, Manitoba, charged from 22nd to fourth before losing a left-rear wheel on lap 88 and being towed away.

It was that kind of night for most of the field, but Davenport avoided any pitfalls in matching his richest payday of the season at the dirt-covered Bristol (Tenn.) Motor Speedway on March 20.

"There's so many things that happened," Davenport said, trying to recount the eventful Cedar Lake 100-lapper. "There was a wreck that almost happened in front of me here on the front straightaway where I got by two or three cars, just different (stuff) happened all through the race. I guess that rock knocked some sense into me."

The Double L Motorsports team just tried to plug away and take care of business, he said.

"I knew after that last heat race (Friday) we had a really good car. We really didn't change much after that. Just a few tweaks," Davenport said. "But you never know, with the weather, what the racetrack's going to be like with that big-ass cushion, Kyle is one of the best on it. I knew I was a little bit better in the middle of the racetrack, but to get back by Ashton, I had to run the cushion because he was just as good as I was in the middle, I think, if he'd have been in clean air."

Winger took second from Davenport on a lap-80 restart when they were still chasing Bronson, but Davenport got the better of Winger on the decisive lap-89 restart when both drivers slid in front of Bronson in turn two. Davenport's high-line momentum put him into the lead with Winger vainly giving chase.

"I really thought I was going to give them guys a run there. I knew my best shot was restarts," Winger said. "I threw a couple (of sliders), and threw one, and did everything I could just short of wrecking Kyle — I hope I didn't mess him up — and then the one where J.D. went to the lead, I actually think that I could've went in there a little bit harder. But I figured if I did I was going to send J.D. and Bronson out to the corndog stand. So I didn't figure I needed to do that.

"So congrats to J.D., he definitely had the better car than me at the end there. I could stay with him for one or two laps, but he would drive off a couple (tenths of a second) every lap. I just got beat on that last restart."

Winger, who earned $6,000 in Friday's preliminary feature, didn't get his feelings hurt in finishing behind the top two drivers in DirtonDirt.com's Top 25 power rankings.

"It's good company to be in up here," he said. "So we'll lick our wounds and go on to the next one."

Overton, last year's USA Nationals winner, could scarcely have had a quieter run through the first 90 laps. Starting seventh, he was never higher than sixth in the first half of the race and slipped back to 10th on lap 69. A lap-80 restart got him into the top five for the first time and — like Davenport — he simply avoided trouble while sticking with the low groove.

"Honestly, we're just lucky to run second. (We) just missed a little bit," Overton said. "(His car was) way too free to run through the middle. I definitely had to rely on that bottom. But, the way it was about to go, and the way it ended up, we'll take our second."

The feature was slowed by 12 cautions, the first one on the second lap when Tyler Bruening spun in turn two with other drivers (Jimmy Mars, Shannon Babb and Dennis Erb Jr., among them) catching damage. One lap later, Chase Junghans drew a caution to head pitside and retire.

The next yellow came out on the 23rd lap for debris and a lap-31 caution appeared for a slowing Chad Simpson, then again on lap 53 for a slowing Frank Heckenast Jr. Jake Timm's hood flipped up on the 60th lap to draw the sixth caution.

The lap-79 caution was immediately halted when the fourth-running Chris Madden stopped with a flat left-front tire, showing his frustration with Bronson en route to the pits.

A yellow flew on lap 86 for a slowing Bobby Pierce and the final caution came out on lap 88 when Weiss ripped the center out his left-rear wheel entering turn three.

Nick Anvelink won the 30-lap Cedar Lake Late Model feature, which was checkered 8:10 p.m. to set the stage for the USA Nationals finale. … Track prep commenced immediately after the Cedar Lake Late Model A-main; officials tentatively set 8:45 p.m. as the start time for USA Nationals driver introductions. … The weather forecast has steadily improved throughout the evening to the point where now the chance of precipitation does not exceed 20 percent until 3 a.m. … Brandon Overton starts seventh as he seeks to become just the third driver in the 34-year history of the USA Nationals to win the race in consecutive years. Billy Moyer strung together victories from 1988-90 and 1992-93 while the late Jack Boggs was the last racer to accomplish the feat in 1994-95. … Over the past decade nine different drivers have won the USA Nationals; the only repeat victor is Josh Richards (2011 and ’16). … First-time USA Nationals feature starters are Max Blair, Garrett Alberson, Nick Hoffman and Jake Timm. … Receiving provisional starting spots were Brent Larson, Bobby Pierce and Gordy Gundaker.

It didn’t take long for cars to get up to speed once they hit the speedway at 6 p.m.; after just a handful of track-packing laps, drivers were clicking off fast circuits. The inside lane will likely remain wet for a bit, but the surface higher up the came around quickly. … The first of two B-mains took the green flag at 6:34 p.m.; a caution flag immediately was displayed when outside polesitter Mark Whitener’s Big Frog Motorsports machine went straight into the turn-one wall due to an apparent mechanical failure. The Floridian wasn’t injured. … A turn-four tangle on lap one of the second B-main left Chris Simpson shaken up from a hit to his driver's side door. The ambulance crew came to the scene to check but he did not climb from his car before it it was towed away and he appeared to be OK. ... With Hoosier facing supply issues with LM-30 compound tires for the right-front and left-front corners of cars, WoO officials announced that Saturday’s tire rule has been altered to make it mandatory for teams to bolt harder 40-compound rubber on both rear corners come feature time. A Hoosier truck from Indiana arrived at Cedar Lake on Saturday afternoon with a supply of about 60 LM-40 compound tires to handle the needs of teams. ... Drivers who decided to scratch from Saturday's competition included Brian Shirley, Rick Eckert, Allen Murray, Boom Briggs, Ryan Gustin, Billy Moyer Jr. and Jason Rauen.

With skies cloudy but undoubtedly brighter and the track surface nearly race ready, WoO officials blew the 10-minute horn at 5:50 p.m. to signal it was time for B-main cars to line up for hot laps. The first machines rolled onto the oval to complete the track-packing process at 6 p.m.

Track officials were hoping to push the show ahead to start hot laps at 4 p.m. CT, but a light shower that dropped rain for about 15 minutes around 3:15 p.m. slowed the track-packing process. Since the precipitation ceased, packer trucks have been circling the speedway and as of 4:30 p.m. it appeared some progress was being made — so much, in fact, that officials were confident that they could soon call cars to the track to help ready it for racing.

With forecasts seemingly improving — one shows the chance of rain not topping 20 percent 11 p.m. — hopes are rising that the USA Nationals finale can be spun off this evening.