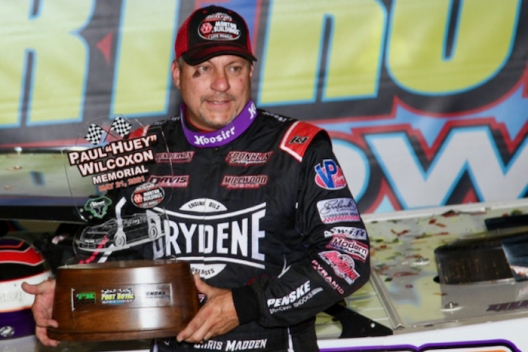 PORT ROYAL, Pa. (May 21) — If there were any lingering questions about his status as a legitimate title contender on the World of Outlaws Morton Buildings Late Model Series, Chris Madden answered them Friday night at Port Royal Speedway.

Earning his second straight series victory with a dominating performance, Madden of Gray Court, S.C., led every lap of Friday’s Huey Wilcoxon Memorial to score a $10,000 victory on the opening night of the WoO tour’s weekend doubleheader at the Port Royal’s historic half-mile oval.

Starting from the pole in his self-owned Rocket Chassis, Madden ran mostly unchallenged in the caution-free 40-lapper to earn the 31st WoO victory of his career and his third series win of the season. Second-starting Brandon Overton of Evans, Ga., briefly caught Madden in traffic with five laps remaining, but Madden pulled away in the final laps to take the checkers with a lead of 1.036 seconds.

“We were good when I could use the whole racetrack,” said Madden, whose victory on Friday followed his $22,500 triumph in the tour’s most recent event May 8 at Mississippi Thunder Speedway in Fountain City, Wis. “In lapped traffic it was a little hairy. I was actually too tight in lapped traffic and that would get me too loose of the corner. Just got a little bit of work left to do here.”

While Madden may have some work planned for trying to improve before Saturday’s $15,000-to-win Billy Vacek Memorial that wraps up WoO’s weekend at Port Royal, he’s happy overall with the direction his program is headed.

“We got (the car) to where it’s really good right now, and it fits me,” Madden said. “Obviously, we’ve found something here. We just have to stay on top of our game, doing the right things, and making the right calls.”

Making his first ever appearance at Port Royal, Overton was satisfied with his runner-up performance in his Wells Motorsports Longhorn, but will look for even better when he returns for Saturday’s $15,000-to-win weekend finale.

“He’s really good in that condition,” Overton said of Madden’s prowess on slick surfaces like Port Royal produced for Friday’s feature. “I ain’t got much experience around here and didn’t know what to expect, but I’ll take it. … It’s a different animal from what I’m used to racing, but I like the challenge.”

Sheppard, the Rocket Chassis house car driver who has just one WoO win in 2021 after dominating the tour in recent seasons, recorded his fifth straight podium finish in a WoO points-paying feature. But for the second straight race his performance wasn’t good enough to keep Madden from cutting into his points lead.

“We just gotta keep working on this thing. We’re right there. We got our consistency back and we’ve been really good,” said Sheppard, who now leads Madden by 54 points in the WoO standings. “We definitely could’ve been better in the feature and wanted to be a couple spots better, so we’re going to get to work and hopefully come back a little bit better tomorrow.”

Notes: Twenty of the race’s 26 starters were running at the finish with 12 cars finishing on the lead lap. … With his fifth-place finish, Bruening moved ahead of Kyle Strickler for third in the series standings to rank as the tour’s current top rookie contender. … Strickler is driving Scott Bloomquist’s Team Zero Race Car this weekend at Port Royal after parting ways with CC Motorsports and team owner Craig Sims during the break from WoO action. … Gregg Satterlee of Indiana, Pa., was battling for second in Friday’s third heat race when a shredded right-rear tire caused heavy body damage to his car. He didn’t make the main event.