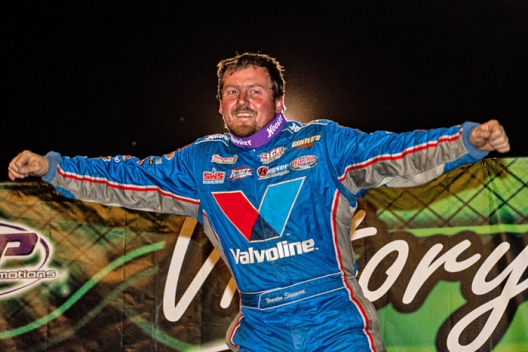 FARMER CITY, Ill. — Superstar dirt racer Brandon Sheppard is typically waving in victory lane at tracks all across the country from the roof of the Rocket Chassis house car. The New Berlin, Ill., driver kept it a little closer to home in his family-owned No. B5 Friday, leading every lap of the Farmer City 74 for a $10,000 victory.

And there he was standing on the roof in victory lane, later thanking "everybody involved with the B5 team, my whole family," he said. "We're having fun."

No one else was having too much fun trying to keep up with the polesitting Sheppard, who wasn't challenged and built leads of more than four seconds in dominating a race where drivers were forced to run single-file in the inside lane most of the way.

Sheppard took the checkers 2.715 seconds ahead of Bobby Pierce of Oakwood, Ill., while Benton, Ky.'s Tanner English of Illinois-based Riggs Motorsports was third. Dennis Erb Jr. of Carpentersville, Ill., and McKay Wenger of Fairbury, Ill., rounded out the top five finishers in the first of two five-figure paydays during a MARS weekend in Illinois.

Sheppard stayed comfortably ahead throughout the race, often having a cushion of lapped cars between his machine and his closest pursuers.

"We had a fast car and I messed it up there at Brownstown (Speedway in Indiana) a few nights ago," said Sheppard, who made his second start of the season in the No. B5. "Tonight's it's definitely awesome to get redemption. I was really happy with how balanced my car was at the very beginning of the race before it rubbered, then unfortunately the track rubbered, but luckily we were out front.

"Lapped traffic was definitely tricky, but like I said, my car was really balanced and I could move around all over the place. I could run the bottom, I could run the middle — I could run the top if I had to, but I never really had to. It was pretty dusty up there."

Pierce wondered what might've happened had he started ahead of Sheppard, but he knew the winner's car was best.

"Normally the racing's a lot better as you know. The track was a bit dry tonight, but I'm glad we were able to hang on there and get second," Pierce said. "I was really tight there towards the end of the race, after I got into that lapped car, especially.

"Congrats to Brandon on the win. That redraw, maybe if we would've got the pole there, it would've been a heckuva race, because he was a little bit faster. No one had anything for him there. Just once again, glad I got to second. I knew the rubber was going to come — my dad owes me a million dollars."

English, who lost the second spot to Pierce on an early restart, held on for a podium finish.

"We'd like to be two spots better, but with these two guys here, at this racetrack especially, it's not too shabby," English said. "And we had some good competition behind us, as well. We'll take it. Like I said, we've got some really good momentum (toward) the Summer Nationals deal and some more big races, and we're just pretty pumped about it."

The feature was slowed by three cautions, none for serious incidents. Shannon Babb slowed on the 13th lap for the first yellow and another caution appeared on the restart when Mitch McGrath spun in turn two. The last yellow came on lap 61 when fifth-running Brian Shirley had a flat tire.