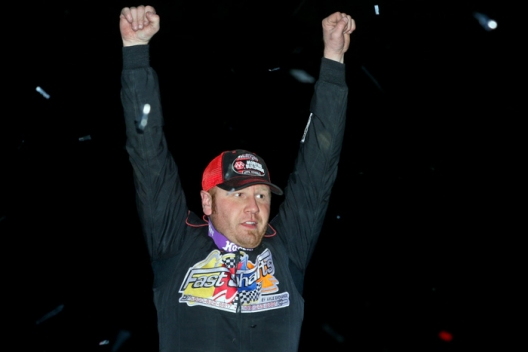 The problem for the 30-year-old driver from Manhattan, Ill., was that his two closest pursuers were hungry to make the same breakthrough on the national tour.

Spatola managed to hold on for a milestone triumph worth $6,000 at his home-state track, but he had to survive the furious late-race challenges offered by his fellow Land of Lincoln residents — El Paso’s Ryan Unzicker and Oakwood’s Bobby Pierce — to get the job done.

“I’m so excited I can’t think right now,” Spatola said in victory lane on a frigid evening that marked his first start of the 2021 season and the first major event of the season in the Dirt Late Model hotbed of Illinois.

Spatola shot forward from the third starting spot in his family-owned XR1 Rocket car to take the lead from the polesitting Unzicker on lap five and was never headed, but he experienced several anxious moments during the sprint to the finish that closed the feature after the last of three caution flags on consecutive circuits flew on lap 18. Unzicker and Pierce were were all over Spatola in the final laps before settling for second and third, respectively — Unzicker a mere 0.348 of a second behind Spatola, Pierce just 0.411 in arrears of the victor.

Tanner English of Benton, Ky., who started 10th, was a bit farther back in fourth place at the checkered flag driving the Riggs Motorsports machine he campaigns on the Lucas Oil Late Model Dirt Series. Three-time and defending WoO champion Brandon Sheppard of New Berlin, Ill., finished fifth in the Rocket Chassis house car, advancing from the 18th starting spot to register his first official top-five finish of the tour’s 2021 campaign.

A winner just once in 39 starts during last year, Spatola burst out of the 2021 starting gate in a big way with the most prestigious and richest victory of his career. It couldn’t have come at a better place.

“Oh man, it’s awesome, especially to do it here,” said Spatola, whose lone ’20 score came on June 19 in a regular show at Farmer City that paid a modest $1,000. “Farmer City’s pretty much our home track. Here and Fairbury, we race here about every week.

“I have so many people to thank. We put a lot of hard work in this winter, and a lot of great sponsors, and it’s awesome for it to pay off.”

Spatola drove away to a lead of nearly a straightaway on the quarter-mile bullring shortly after overtaking Unzicker for the top spot. Heavy lapped traffic near the race’s halfway point allowed his rivals to close in, so he breathed a sigh of relief when Brent Larson of Lake Elmo, Minn., slowed on lap 16 to bring out a caution flag.

Subsequent caution flags on laps 17 and 18 — the first for Scott James of Bright, Ind., falling off the pace, the second for Ricky Thornton Jr. Chandler, Ariz., spinning out of fifth place after clipping an inside yuke tire in turn one while racing close with Darrell Lanigan of Union, Ky. — didn’t sit as well with Spatola.

“I was happy to see the first caution to get me out of lapped traffic, but then three or four cautions back-to-back, they were starting to get really frustrating,” Spatola said. “I knew that first restart after the first (caution), I seen Pierce under me (off turn two), and I gotta thank him for giving me room because I’m sure he could’ve used me up and won this deal.

“I couldn’t quite restart as good as I needed to, and I was kind of like a sitting duck going off into one there. I had to hit it perfect, and to have to do it three, four, five times in a row, it was like, ‘Come on guys, let’s get this thing done.’”

With two laps remaining Spatola had Unzicker and Pierce right behind him. His car bounced noticeably on the increasingly rough backstretch surface working the final lap, but he maintained control and reached the finish line first.

“It got treacherous there at the end,” Spatola said. “I was just holding on off of two. It was a rodeo.”

Unzicker, 39, showed no real disappointment upon settling for a runner-up finish. He called his brand-new MB Customs car “sporty” and hailed Spatola’s performance.

“It just feels good to be on the podium,” Unzicker said. “Opie (Spatola’s nickname) was damn good tonight, and just being right there feels really good.”

The 24-year-old Pierce had an eventful run to his third-place finish in his Pierce Race Car. He reached second on lap 15 and appeared primed to challenge Spatola before the lap-16 caution flag. He then slid up into Brian Shirley of Chatham, Ill., in turn four while battling for second on lap 17 and swapped the second spot with Unzicker several times over the final four circuits.

“We were giving it all we had. That was a helluva battle,” said Pierce, whose chase of an elusive WoO A-main win continues. “I think we just needed to stay green for my tire to stay in. I think we had the same (tire compound) on as everybody, but it seemed like I was good on the long green-flag run. Caution after caution kind of hurt me I think.”

Notes: Including a pair of split-field preliminary features on March 26 at Cherokee Speedway in Gaffney, S.C., that offered only show-up points, there have now been eight different winners in nine WoO events this season. … Shirley slipped back to an eighth-place finish after his lap-17 contact with Pierce. … Seventh-starter Shannon Babb reached second on lap nine and was still third on lap 17 when he slid off the homestretch and fell to seventh. He went on to finish ninth. … Darrell Lanigan was set to restart fourth on lap 18 but had to pit due to a flat tire. … Kyle Strickler remained the WoO points leader despite using a provisional to start 23rd in the feature, but after finishing 16th his edge shrank to 44 points over Sheppard. … Wisconsin's Taylor Scheffler was the overall fastest qualifier, won his heat heat and started from the outside pole in the feature, but he faded to a 15th-place finish. ... Frank Heckenast Jr. was the apparent runner-up in the second B-main but was disqualified after officials found an unapproved droop limiter on his car during post-race inspection. His banishment moved Devin Moran into a transfer spot. … Jimmy Mars fell from a transfer position in his heat with a flat tire. He opted to scratch from the B-main. … Ross Bailes and David Breazeale missed their first WoO events of the season; with prospective WoO regulars Tony Jackson Jr. and Ryan Scott also not on hand after skipping the previous week’s event at Cherokee, 16 drivers are left with perfect attendance. … The Illini 100 weekend concludes Saturday with a 75-lap feature paying $20,000 to win.