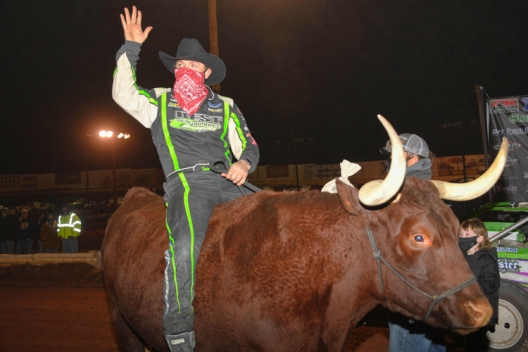 Erb came out on top of a back-and-forth battle with Davenport, finishing a scant tenth of a second ahead of the Blairsville, Ga., driver who had won two of four main events entering Saturday’s race. Third-starting Ricky Thornton Jr. of Chandler, Ariz., who won the Jan. 10 feature, completed the top three. Sixth-starting Jimmy Mars of Menomonie, Wis., finished fourth after running as high as third midway through the 40-lap feature and Jason Papich of Nipomo, Calif., rounded out the top-five after starting seventh.

Davenport, who started from the outside front row, led the first four laps before giving way to Erb, who charged forward to lead lap five. Erb paced the middle portion of the caution-free race while building a lead of more than one second. But as the leaders sliced through lapped traffic, Davenport reeled Erb in and slipped by to lead lap 32. Erb wouldn’t be denied his second straight miniseries victory, however, as he charged back by to grab the lead on lap 37. Diving down low in turn four as Davenport drifted up the track and into the cushion, he shot back ahead and sped away to the win.

“I kinda got … I don’t even know what you’d call it … I looked up on lap 24 when I was leading and I thought man, I shouldn’t have don’t that,” said Erb. “You know next thing you know J.D. I could see him underneath me in (turns) one and two and he got clear of me there and I thought man I messed up here for good. (I) just kind of moved around in (turns) three and four really. I wanted to run the top but man it was hard to do it. Them lapped cars are so hard to deal with and then he decided to go low two laps in a row and I got a really good run there around the top around him and just threaded the needle again is all you can say.”

Davenport, seeking his third Wild West Shootout victory of 2021 and the $10,000 bonus that goes to the first driver to win three features, thought he had a perfect plan. After giving up the early lead, he didn’t press the issue, instead choosing to save his equipment for the end. But as the race went without a caution and the leaders maneuvered through slower traffic, Davenport never got as comfortable as he wanted.

“It’s like I play these things out in my head and I just can’t get ‘em to work right at the end,” said Davenport. “The first half of the race I never went over half throttle ‘cause I knew (the track) was just so dirty and I was gonna kill my tire. We’ve been killing tires every night here and I haven’t been as good at the end. So I just paced myself as best I could. I just kept inching back in on him and then when I decided to go, man this thing was fast. I drove right to him and then I got to him in lapped traffic there and I just messed up a couple times off (turn) two.

“I never could figure out my exit where I needed to be through them lapped cars. He got a run on me there and I went back to the top in (turns) three and four and I saw him coming. I knew he was gonna slide all the way, but I’d just got back in the gas when I saw him. I hit the brake and turned down and hit a hole and it actually jumped me to the right in the cushion ‘cause I actually come out of the gas. That’s just all my fault and then I got back up on the horse and run him back down but it was too (little) too late. Congratulations to him. He done a hello a job, him and Randall (Edwards). I just hate it for my guys. That’s two times I’ve let ‘em down. We should’ve had more of these.”

Thornton managed to close in on the two front-runners with just a few laps remaining. After getting around Mars, he cut his deficit down from nearly a straightaway but never got the caution he needed.

“When it was kinda dirty there at the beginning, really I wasn’t very good,” said Thornton. “Then when that kinda blew off I could kinda move around and I found the top. I think I was driving harder there tonight than I was last night just because the curb was so big. We tried a couple different things tonight and I think we learned for (Sunday).

Notes: Polesitter Bobby Pierce of Oakwood, Ill., had motor issues as was the first to retire, competing only nine laps. … Ten of the 24 starters completed all 40 laps. … Davenport recorded his fifth top-five finish in as many starts. … With Erb and Davenport the only two drivers eligible for a bonus heading into Sunday’s finale, Erb said he planned to savor Saturday’s win before looking ahead. “We’re gonna enjoy this one. We definitely want to win (Sunday) but we still have to go through everything, get our notes straightened out and when we wake up (Sunday), that’ll be on our mind.” … Jimmy Mars’s fourth-place finish was his best of the week. “We got a better start than we’ve been getting the last few nights,” Mars said. “To come out with a fourth place, these teams are pretty tough customers and I actually got to pass Thornton there for a bit, I thought, you know what, at least we’re going in the right direction.” … Fifth-placed Jason Papich said his confidence is up following his second top-five finish. “Obviously our confidence is high right now,” he said. “We have a good setup … things going on with the car. This Longhorn  is just amazingly fast. I mean it feels real good to be able to run with these guys up front. The front of this field is actually (full of) national winners.” ... Mitch McGrath won the Pro Power Dash for non-qualifiers, earning $1,000.

The trend lines for the 2021 Keyser Manufacturing Wild West Shootout continue for Saturday’s fifth of six race nights: sunny skies with an afternoon high reaching the upper 70s and another massive field of 61 Super Late Models among a total turnout of 180 entries (72 modifieds, 46 X-mods). … Last year’s final Saturday-night WWS program drew 40 Super Late Models. … Mike Marlar of Winfield, Tenn., is still searching for his first win of the week after a 24th-place finish in Friday’s feature, but he has one reason to feel fortunate as he heads out for Saturday’s action: he narrowly avoided disaster on the first lap of Friday’s 30-lapper. His car’s steering wheel came off in his hands as he exited turn four, forcing him to lock up his machine and spin into the first corner; though he was near the front of the pack after starting sixth, he somehow escaped the incident without absorbing a metal-crushing blow from another car. … Chris Simpson of Oxford, Iowa, and his crew stayed up until about 1:30 a.m. to repair extensive body damage his MB Customs car sustained in Friday’s feature after a scrape with Donny Schatz of Fargo, N.D., sent him spinning in traffic. … Jared Landers of Batesville, Ark., and his Rauen Racing team had sheet metal and other damage to fix after an inauspicious end to what appeared to be a solid outing in Friday’s headliner. Landers ran as high second before slipping to ninth on a restart due to a tight handling condition; he later clipped the outside wall in turns three and four when he couldn’t overcome a push. … Rusty Schlenk of McClure, Ohio, enjoyed his best finish of the week — sixth in Friday’s 30-lapper — after pulling out his older Domination Chassis for Round 4 of the miniseries. He made the car change after discovering his performance in his newer machine was being hampered by a bent frame that apparently occurred when he bottomed out during Jan. 8’s open practice.