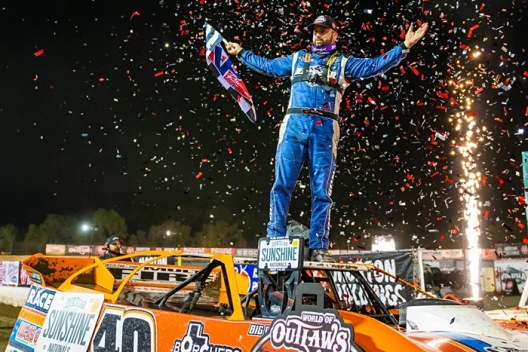 But Dillard's scrape with second-running Darrell Lanigan on a lap-35 restart moved Bronson back into second, just behind Dillard's now-damaged car. Getting an unexpected second crack at winning, Bronson pulled off a turn-two slide job on Dillard with three laps remaining and led the rest of the 40-lapper for a $10,000 victory.

The 30-year-old Brandon Fla., driver's success in a brand new Rocket Chassis came at the same track where he captured his only other WoO victory in 2014 as the Lucas Oil Late Model Dirt Series regular celebrated a victorious start to his national touring season.

"I had a damn good time racing," the second-starting Bronson said in victory lane after climbing atop his car and waving the checkers amid a confetti shower.

Robeline, La.'s Dillard, who led laps 22-37 and appeared to have the race in hand before tangling with Lanigan, finished 0.957 seconds behind as the runner-up while Kyle Strickler of Mooresville, N.C., made a late charge to finish third in an opener where pre-race favorites weren't factors and other contenders fell by the wayside.

Bronson got the jump on pole-starting Dale McDowell and controlled the first half of the race, but the handling of his orange No. 40B was a handful as Dillard began to apply pressure.

"I was extremely, extremely tight there, and the more I tried to slow down and pace myself, the tighter I got," Bronson said. "I feel terrible for Cade there. Him and Darrell had a good car. I thought he was going to win it because of my mistakes."

But Bronson made the most of his second chance by diving under Dillard in the closing laps to open the tour's 55-race season.

"There at the end I got it done," Bronson said. "Hopefully I cleared (Dillard) when I slid him for the lead there."

Lanigan, who ran in the top five for the first 35 laps, was apologetic to Dillard after the race, but the contact between the frontrunners in turn two not only sent Lanigan spinning, but it ripped off the left-front plastic over Dillard's wheelwell.

"Man, we had a really good car. I knew we had a lead there, so I was just hoping (during) the caution for somebody not to do something stupid," said the sixth-starting Dillard, who was looking for his third career WoO victory. "When we lost that left front, the whole car just (handled) terrible. These things are so aero-dependent. (sighs) I don't know. It's just disappointing. We had a really good car and have been working really hard.

"I'm not going to get on here and badmouth nobody, I know stuff happens, but it's just unfortunate. We had a really good car and I just hate to lose a race like that. Once that got tore up, we were just kind of hanging on there. But congrats to Kyle, he did what he had to do to win the race and ran my clean — I really appreciate him doing that."

Strickler, who started ninth but ran mid-pack the first half of the race, made a late rush to grab a third place finish in his own Longhorn Chassis against some drivers familiar to him from his open-wheel modified days.

"It's pretty awesome to have three modified guys standing here on the frontstretch," Strickler said. "That was some of the sketchiest racing and driving I've done in my entire life. It would not steer at all, and I felt like I was all over the place and out of control. I think all three of us wrecked about 20 times in that race there.

"The new dirt, I don't know, it's just so different. It's so polished up and so slick on corner entry, and then you've got all that grip up there against that cushion."

Tim McCreadie of Watertown, N.Y., held the second spot for a dozen laps but retired with engines woes while running third three laps later. Series rookie Tony Jackson Jr. of Lebanon, Mo., gave up the fifth spot when his engine let go on lap 35 and McDowell, who immediately fell back to fourth and never recovered, retired on lap 33.

The 40-lapper was slowed by five cautions, none for serious incidents. A Boom Briggs-Chris Madden scrape brought out a lap-three yellow and a lap-16 caution appeared for a slowing Ross Bailes.

Three cautions appeared on lap 35, first for Jackson and again when John Baker ran into trouble on the ensuing restart. The last yellow flew for Lanigan's spin.

Notes: Bronson's first WoO victory came in the 2014 Speedweeks finale with a daring, high-flying run at Volusia that marked his first career Super Late Model victory. ... WoO competitors go back into action Friday for another $10,000-to-win event, the centerpiece of the three-race weekend. ... Sixteen drivers completed 40 laps with Lanigan the last driver on the lead lap. ... Mark Whitener of Middleburg, Fla., earned an apparent feature berth with a runner-up finish in his heat race, but he failed postrace tech and couldn't transfer through a consolation race. ... The feature started just after midnight.

Ashton Winger’s sophomore WoO season got off to a rough start when he blew an engine in hot laps. Without a backup car, he’s going to run Mike Collins’s No. 3 machine for the reminder of the night and will replace the motor in his car for Friday and Saturday. ... The majority of the WoO regulars from 2020 are back for another year in 2020 with the addition of at least five Rookie of the Year candidates in Ross Bailes of Clover, S.C., Ryan Gustin of Marshalltown, Iowa, Tony Jackson Jr. of Lebanon, Ga., Ryan Scott of Garland, Pa., and Parker Martin of Milledgeville, Ga. … Martin, the 16-year-old son of Cochran Motor Speedway promoter Chris Martin announced his intentions to follow the tour on Thursday. … While he isn’t committing to the tour just yet, Tyler Bruening of Decorah, Iowa, said he has been told by WoO officials that he would be eligible to compete for the tour’s rookie honors if he follows the series. Bruening, 34, competed as a rookie on the Lucas Oil Late Model Dirt Series in 2020, finishing second to Tanner English of Benton, Ky., in the tour’s rookie points with one top five and six top 10s while making 41 of 47 feature lineups. Bruening doesn’t intend to finalize his full 2020 plans until after Speedweeks. … Bruening is racing without Skyline Motorsports teammate Shane Clanton of Zebulon, Ga., who is delaying his start to the season while recovering from a battle with Covid-19 that left him hospitalized for a week. Clanton, the former WoO champion who followed the Lucas tour for the first time in 2020, had planned to compete in both national tour’s full Speedweeks slate to keep his options open for both series this season. … Veteran racer David Breazeale of Four Corners, Miss., is debuting a new Barry Wright Race Car at Volusia that he owns himself. The longtime Henderson Motorsports driver plans to field his new car in both Volusia stretches during Speedweeks and may follow the full tour if things go well in Florida. He’ll also continue driving the Henderson entry in select events this year starting with the Lucas Oil-sanctioned Winternationals at East Bay Raceway Park in Gibsonton, Fla., Jan. 25-30.