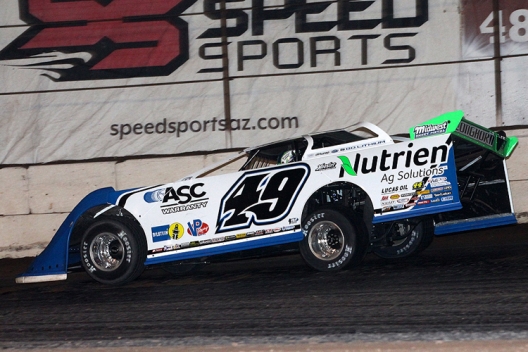 Fifth-starting Jason Papich of Nipomo, Calif., finished third, while Mike Marlar of Winfield, Tenn., improved six positions to finish fourth. Bobby Pierce of Oakwood, Ill., finished where he started in completing the top five. Davenport’s fifth career Wild West Shootout victory paid $5,000 and leaves him one win shy of collecting a $10,000 bonus as the first driver to win three of the events this season. If he can run the table in the final three events, he’d pocket a $100,000 bonus.

“As far as the bonus and everything, that’s what we came out here for. You know we wouldn’t travel … six days it felt like getting out here … for nothing,” said Davenport. “I feel like we got a really good shot (at the bonus). We tuned on the car a little more tonight than we had been and I was better early, but I was worse later when it rubbered up. So we know what we did and everything is really going good. We’ve been making really, really miner changes. Even from qualifying to the feature, we ain’t even really changed a shock and spring on the car yet. I really like the car and the good thing about it is we unloaded the other car (for practice on Tuesday) night and we actually went faster in it.”

Davenport’s primary car was plenty fast enough on Wednesday, despite a tricky surface that threw a curveball at many of the competitors, Davenport among them.

“I thought tonight would be the night that the track would be more muddier and move around more,” said Davenport. “It was pretty much just the opposite. I think it rubbered up faster tonight than it has any other (night). Just a half lane off of where they tilled it up there, I guess everybody’s left rear was in it just spinning.

“I kinda felt my left rear start driving more and more. I felt it first in (turns) one and two and so I moved down just a little bit that lap and felt a little bit better. Then it took awhile to get it in (turn) four (or) maybe I just never was running low enough. It was hard to tell where everyone else was running. I kept just inching myself down and finally found a little bit going in, but it never really was rubbered coming off until the end and like the last lap I stayed out wider and that’s probably where I needed to be.”

Davenport powered around the outside ahead of polesitter Stormy Scott of Las Cruces, N.M., on the opening lap and eased away leaving Scott to battle Papich, Ricky Thornton Jr. of Chandler, Ariz., and Brian Shirley if Chatham, Ill. But three cautions slowed the pace early, the third of which fell on lap seven and eliminated contenders Shirley, Thornton and Scott.

Shirley slid ahead of Thornton entering turn one to grab the third spot, but the two drivers made hard contact at the top of the track. Scott was caught up in the melee as well as three of the top five cars were eliminated from contention. Shirley, a three-time Wild West Shootout winner last season, managed to soldier on to finish 17th, the last car on the lead lap.

With three of his closest pursuers experiencing trouble, Davenport pulled out to a comfortable lead on the restart as Erb slipped ahead of Papich into second. With most drivers glued to the higher groove, it didn’t take Davenport long to catch the tail of the field. As he did, Erb closed in on the leader, pulling even on lap 21 as the duo crossed the line in a dead heat. The two touched as they exited turn four and the electronic scoring system had Davenport just ahead as they completed the lap.

“I was just trying to be patient with (18th-running) Jason (Feger) there because he was moving around trying to get by that lapped car,” said Davenport. “In the rubber, you don’t want to be right in a guy’s quarterpanel right there so in case he makes a move or whatever and one time he dove way to the bottom and I was too close or I could have got by him on the outside right then. So I tried not to make that mistake again and I was probably just slowing up my entry too much and that’s how Tyler got up beside of us.

“We hit there, but I crowded him getting in the corner because I knew I’d be the first one to scotch back in the rubber and then I saw (Feger) was slowing down on the bottom then. So I was trying to use him as a pick but then I was trying to cut the corner off and make it a wide entry that way I would definitely be the first one back to the rubber and try to get going. The worse thing about the rubber here is you can’t see it. It gets backer but it’s not like up North where it turns white or down South where it turns red. Here it gets blacker and you really don’t know where it’s at.”

Notes: Saying his right rear was chattering, Jason Papich thought he had a tire going down in the late stages as was just  holding on to finish third. … Pierce clipped Shirley's stricken car as he passed the lap-seven accident scene, but the damage to his machine wasn't significant enough to force him to the pits and he marched on to finish fifth. ... Seventeen of the 24 starters completed 30 laps, with 19 cars still on the track at the finish. … Cautions flew on laps five, six and seven. Chad Simpson slowed on front stretch to draw the first yellow and Jared Landers stopped in turn two in the Rauen Racing machine to bring out a caution on lap six.

Sunny, comfortable weather continues for Wednesday night’s program with another day of high temperatures in the low 70s and expected lows dipping into the low 50s/high 40s. … The Super Late Model car count remains strong with 57 entires signed in — an increase of 13 machines from last year’s Wednesday-night Wild West Shootout event. … WWS co-points leaders Ricky Thornton Jr. of Chandler, Ariz., and Jonathan Davenport of Blairsville, Ga., showed no drop-off after two nights of inaction; Thornton was the fastest overall qualifier and Davenport was second-fastest in his group behind Mike Marlar of Winfield, Tenn., who finished third on Sunday and will shoot for his second career WWS victory. Marlar's previous win came in 2018 at Arizona Speedway. … Bobby Pierce’s father, Bob, expressed frustration with his son’s pair of DNFs to start the WWS, but he feels good about things he’s learned so far. Two nights of racing and two of practice have provided him an opportunity to get comfortable working at the racetrack with new crewman Cody Mallory. “I can talk to him about things. He’s seen and done a lot,” Pierce bottom-lined. “They say, ‘Two minds is better than one,’ and hopefully that will help us.” … California car owner Pete Van Iderstine wasn’t in attendance at Arizona Speedway on Saturday when his drive, Cody Laney of Torrance, Calif., recorded a fifth-place finish in the feature. But the soon-to-be 85-year-old has arrived to join his team for the remainder of the WWS, though he said he’s keeping his distance from crowds and wearing his mask in order to reduce his risk of contracting Covid-19.