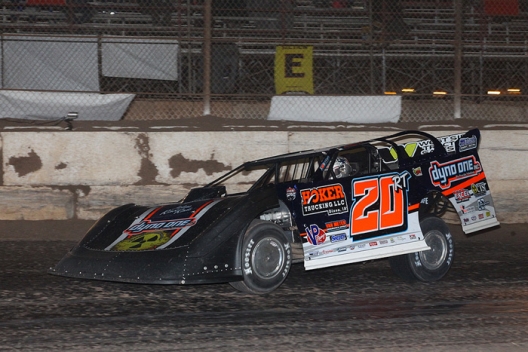 QUEEN CREEK, Ariz. — All but a handful of Keyser Manufacturing Wild West Shootout drivers are invading Arizona, trying to cash in on the winter miniseries that offers solid purses and tantalizing bonuses. Ricky Thornton Jr. decided he wanted to keep some of that money in his native state.

The 30-year Chandler, Ariz., native grabbed the lead from opening-night winner Jonathan Davenport on the 24th lap and led the rest of Sunday's 40-lapper, earning $5,000 in the second round of miniseries action while reversing Saturday's finishing order at FK Rod Ends Arizona Speedway.

"It's definitely pretty special, right here in front of our hometown crowd," said Thornton, who guided his Indiana-based SSI Motorsports Longhorn Chassis to a 1.015-second victory over Davenport at the 3/8-mile oval near Phoenix. "I think R.C. Whitwell is the only Arizona guy to do it, so it's pretty cool to add another guy to that list."

Davenport, the Blairsville, Ga., driver who took the lead from Brian Shirley on a lap-seven restart but gave up the point just past halfway, settled for second as he and Thornton eye a potential $100,000 as part of the Keyser Quarter-Million Bonus. The $250,000 windfall for a six-race sweep is off the table, but $100,000 goes to a five-race winner, $25,000 to a four-race winner and $10,000 to the first three-race winner.

The miniseries continues with Wednesday's midweek event before next weekend's Friday-Sunday tripleheader that culminates with a miniseries-high $25,000-to-win finale with 60 teams crowding the pits.

Before the race's midpoint, it appeared Davenport was on his way to making it 2-for-2 in his first weekend at the high-banked track, but Thornton made up ground amid traffic at halfway. Davenport got into the wall on lap 21 with Thornton sliding under a lapped car to close in and draw within a length on the next lap as Davenport continued to struggled with slower cars.

With Davenport hung up behind Luke Merfeld, Thornton slid underneath exiting turn two and took command on the 24th lap.

"He was really good around the top and I was kinda hoping we'd get to traffic and he'd have to move around a little bit," Thornton said in victory lane. "He didn't clear (Merfeld) down the front straightaway the one lap, and I knew as long as I could get close enough, I could try to slide both of 'em, and we'd be able to do it. Kinda of that's what we did.

"Once I got out front, I was running around the top and I really didn't know if I needed to move around or not. ... It's pretty awesome."

The fourth-starting Thornton wondered early in the race if he'd given it away to the fifth-starting Davenport, who repelled Thornton's challenges a night earlier.

"I got to third and (Davenport) got by Shirley around the top, and Shirley moved up and we were kind of sliding each other. It let him get out to about a straightaway (lead)," Thornton said. "At that point I kind of thought we gave it to him. But the longer we ran he kind of slowed down a little bit and came back to me. I ran as hard as I could without abusing my stuff and about put it into the wall one lap in turn one. I kind of just had to slow down and start hitting my marks."

Davenport took the blame for midrace mistakes in lapped traffic that cost him momentum.

"I got the lead when I needed to, you know, I was the first one up in the front to get to the top, and that was the place to be," he said. "I guess I just got a little too high going down the back straightaway and I lost the steering there a little bit and it got me up into the wall and knocked the quarterpanel back, so that definitely hurt us a lot.

"And then I got to a lapped car, and I showed one of them a nose, and he changed lanes right in my lane. That's just the way it goes. Congratulations to Ricky. He drove a helluva race. I pretty much screwed us on this one. But we had a great race car once again and got to the lead, and then I lost it."

Marlar started sixth but didn't break into the top five for good until the 14th lap while mixing it up with Shirley and Feger much of the race.

"We started off there and I was on the outside, and when they watered it was real crumby on the outside, so I was kind of screwed up there for a little bit," Marlar said. "I burned all that off and got going way better. I thought I was going to get the loot there before that first caution came out. I was coming on the outside and nobody really knew (it was the fast way around) at that point.

"Then the guys showed them where to be, and after that it was a little tough because everybody was up there. But it was a fun race. Me and Jason raced like heck all over the place, and Shirley, and it was a lot of fun out there."

The race was slowed by three cautions, none for serious incidents. Jake Timm slowed at the end of the backstretch on the sixth lap and Trevor Gundaker stopped with a flat left-rear tire on lap 11. The final yellow appeared on lap 31 for Rusty Schlenk's flat left-rear.

Notes: Thornton is the second Arizona driver to win a WWS Late Model event; Tucson's R.C. Whitwell won Jan. 1, 2014, at Tucson International Raceway. ... Thornton is a multitime modified winner in WWS action. ... Thornton and Davenport will likely see a lot of each other in 2020. Davenport is a three-time champion on the Lucas Oil Late Model Dirt Series and Thornton plans to run for Rookie of the Year honors on that national tour in 2020. ... Nineteen drivers finished on the lead lap and 21 of 25 starters were running at the finish. ... Trevor Gundaker of St. Charles, Mo., got his first career WWS start by virtue of winning the Pro Power Dash for non-qualifiers and elected to tag the tail of the feature rather than take the $1,000 purse.

Weather conditions remain gorgeous for the second of six Keyser Manufacturing Wild West Shootout programs; skies are sunny with the afternoon high reaching about 70 and evenings lows expected to dip into the low 50s/high 40s. … Fifty-seven cars are signed in, up 15 entries from the first Sunday-night card in 2020. … WWS officials announced that Sunday's event order will move the Super Late Model division to the first of the three features to hit the track. It was run last on Saturday's card. ... Gordy Gundaker of St. Charles, Mo., began his first-ever start at Arizona Speedway on Saturday with a fleet qualifying lap to earn a pole starting spot in his heat, but he lost the handle on his machine early in the prelim and spun. He said he had the wrong shock on his car’s left-front corner, causing a loose condition that caused him problems. “We’re learning what to do here,” said Gundaker, who failed to qualify for the feature. … Another first-time WWS entrant from the Midwest, Jason Feger of Bloomington, Ill., won a Saturday heat and appeared in position for a top-10 finish or better in the A-main until a bent shock caused him to fade to an 18th-place finish. … Jimmy Mars of Menomonie, Wis., didn’t make Saturday’s opening-night feature after losing a transfer spot in his heat because he caught a rut in turn one on the final lap, slid sideways and was clipped by a passing car. “I just messed up,” Mars mourned. … With his fifth-place finish in Saturday’s feature, Cody Laney of Torrance, Calif., became the first California driver with a top-five finish in the WWS since Nipomo’s Jason Papich in 2016 at USA Raceway in Tucson, Ariz. … Papich enjoyed a strong run in Saturday’s feature with a seventh-place finish, but his teammate, Tony Toste of Pismo Beach, Calif., experienced a frustrating hero-to-zero night. Toste was the overall fastest qualifier but spun in turn four on the opening lap of his heat and didn’t qualify.