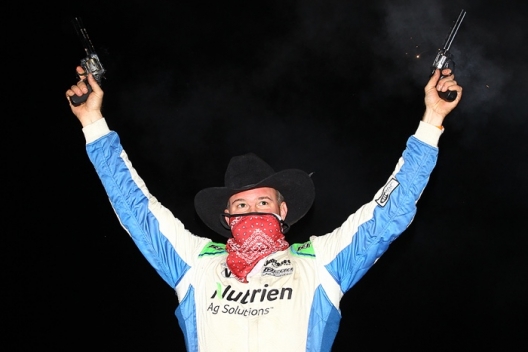 QUEEN CREEK, Ariz. (Jan. 9) — After watching Ricky Thornton Jr. drive under him to take the lead with nine laps remaining in Saturday’s Keyser Manufacturing Wild West Shootout opener at FK Rod Ends Arizona Speedway, Jonathan Davenport knew he only had one option remaining if he wanted to regain the lead and keep his hopes of a quarter-million dollar bonus alive.

“He got under me and I had no idea he was that low,” said Davenport, the three-time Lucas Oil Late Model Dirt Series champion from Blairsville, Ga. “He got a good run down the front straightaway and it was either I was gonna run second or try the top.”

Davenport chose to try the top, and it paid off. Just after Thornton of Chandler, Ariz., inched ahead of him at the completion of lap 31, Davenport took his Longhorn Chassis to the cushion in turns one and two and blasted back around Thornton to reclaim the lead on the next lap.

Davenport dominated from there. Although he continued running low on the track through turns three and four, Davenport committed to the high line around turns one and two for the remainder of the 40-lap race and pulled way to earn a $5,000 victory. In doing so, Davenport remains eligible for the $250,000 Keyser Quarter-Million Challenge bonus offered to any driver sweeping all six Wild West Shootout features.

“I kept moving around, inching down, inching up, but I never could really find something,” said Davenport, whose three previous Wild West Shootout victories came during his only previous trip to the popular winter miniseries in 2016 when the event was held at USA Raceway in Tucson, Ariz. “I knew Ricky had a little bit softer tire on. I thought we’d be better on the longer green-flag runs, but I didn’t know if I’d be as maneuverable as him or not. You just never know. I didn’t know if he was gambling on tires or if I was because he’s run here a lot more than I have.”

Davenport crossed the finish line 1.157 seconds ahead of Thornton, who settled for second ahead of seventh-starting Brian Shirley of Chatham, Ill., in third. Chris Simpson of Oxford, Iowa, advanced from 11th to finish fourth and Cody Laney of Torrance, Calif., advanced from 12th to finish fifth.

Davenport knows that it’s not unfathomable for him to go on a profitable winning streak over the next week. After all, he won three of six races at the event in 2016. The Keyser Manufacturing-sponsored bonus program didn’t include extra money for three wins back then, meaning Davenport left the desert without any bonus money in his first trip out. He hopes to make up for that this time around.

“That’s the only reason we’re out here,” Davenport said after announcer Dustin Jarrett asked him in victory lane if the bonus was on his mind. “We’re here to win money. We’re going to do everything we can to knock off some more wins. We’ve knocked off the first one. That was first on the checklist, so we’ll go on from here.”

For the second straight year, Thornton found himself in contention to earn his first Wild West Shootout victory, only to see it slip away in the final 10 laps, but the Arizona native who now racs out of Iowa was pleased with the opening-night performance.

“We had a really good car. It could really go wherever I needed it to,” Thornton said of his SSI Motorsports Longhorn. “I thought I was going to get lucky and get by him, but then I heard him on the outside of (turn) two. I knew there was so much more speed in the rubber up there off the top of two that he was just going to drive right back by me.”

Recovering from a poor qualifying effort that put him starting mid-pack in his heat race, Shirley advanced his Rocket Chassis from his seventh starting spot in the main event to briefly challenge Davenport and Thorton following the race’s final restart with 32 laps completed. But he faded slightly through the closing laps in settling for third.

“J.D. and Ricky were a little bit better than us, but luckily we have five more nights,” said Shirley, who won three of six races at the 2020 Wild West Shootout including the opener. “My car would maneuver real good, especially in three and four like right in the middle. But there wasn’t enough coming off (the turn) and them guys would stay low. I just couldn’t get off the corner as good.”

Notes: The race was slowed by four cautions. After a caution-free first half of the race, Bobby Pierce of Oakwood, Ill., who started sixth after winning the night’s first heat race, slowed with a flat right-rear tire to bring out the race’s first caution with 25 laps complete. Rusty Schlenk of McClure, Ohio, and Donny Schatz of Fargo, N.D., each brought out single-car cautions on lap 26 and 28 respectively, while a second flag tire for Pierce caused the race’s fourth and final caution on lap 32. … Tony Toste of of Pismo Beach, Calif., got his night of to a solid start when he set fast time overall among 59 cars, but he quickly ran into trouble in his heat race when he spun and got hit on the opening lap. … Gordy Gundaker of St. Charles, Mo., also saw a good qualifying effort go to waste when he spun early in his heat race after starting from the pole.

Tony Toste of Pismo Beach, Calif., got off to a good start at the 15th annual Keyser Manufacturing Wild West Shootout, earning fast time honors over the 59 qualifiers for Saturday’s opening round of the six-race miniseries. Toste’s lap of 15.114 seconds was fastest in the first of two qualifying groups at FK Rod Ends Arizona Speedway and earned him the pole starting spot for the first of six heat races coming up at the ⅜-mile track

Jonathan Davenport of Blairsville, Ga., was fastest in the second qualifying group with a lap of 15.237 seconds, giving him the pole for the fourth heat race. Other drivers earning heat race pole starting spots were Jason Feger of Bloomington, Ill., Tyler Erb of New Waverly, Texas, Ricky Thornton Jr. of Chandler, Ariz., and Gordy Gundaker of St. Charles, Mo.

Each heat race will be eight laps and will transfer the top three finishers into Saturday’s main event. The 40-lap feature pays $5,000 to the winner and is the first of five $5,000-to-win events at the Phoenix-area racetrack that lead up to the $25,000-to-win finale on Jan. 17.

The Keyser Manufacturing Wild West Shootout kicks off under seasonal January weather in Arizona: sunny skies with an afternoon high of about 70 and temperatures dipping into the low 50s/upper 40s after the sun sets. … Saturday’s Super Late Model car count numbers 59, blowing away last year’s WWS turnout that fluctuated from a high of 46 entries to a low of 39 cars. … With the pit area also populated by 64 open-wheel modifieds and 46 X-mods, the combined 169 cars exceeds the total number of drivers (157) that entered at least one WWS event last year. … WWS promoter Chris Kearns spoke frankly to competitors during Saturday’s drivers’ meeting about the health protocols in place for the event. He said Pinal County officials informed him on Wednesday that they wanted all attendees to wear masks and event officials to make hand sanitizer available and remind everyone of the precautions in place through social-media posts. “If you want to race, wear a mask,” said Kearns, who noted that the track sits on state property so health officials will be watching for compliance. “That’s all I’m asking. That’s as simple as I can make it.” … Terry Phillips of Springfield, Mo., and Chad Simpson of Mount Verson, Iowa, changed motors for the opener following Friday’s practice session. … Twin brothers Stormy and Johnny Scott of Las Cruces, N.M., are in the field as teammates but driving different chassis. Stormy is debuting a new Longhorn machine while Johnny is behind the wheel of an XR1 Rocket mount.

The field of Late Models will be split into A and B groups for time trials — a departure from past Wild West Shootouts that saw cars split up into heat-race groups for qualifying. Drivers start heats straight up by time.

Saturday’s event, which starts with hot laps at 3:30 p.m. MT before racing begins at 5 p.m. MT, is the first of six races over the next nine days at the 3/8-mile oval southeast of Phoenix.