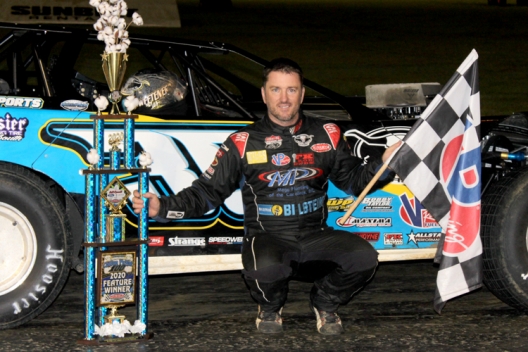 COLUMBUS, Miss. — Tim McCreadie is rarely satisfied. To think that he’d rest on his laurels after winning three of his last eight feature starts shows a complete lack of understanding of the Watertown, N.Y., driver. Rather than being content with his stellar second half of the year, the 2020 Lucas Oil Late Model Dirt Series runner-up, was instead trying to find even more speed during Thursday’s open practice session at Magnolia Motor Speedway ahead of this weekend’s Magnolia State Cotton Pickin’ 100.

He was clearly successful. Debuting a new Longhorn Chassis in Friday’s 30-lap, $4,000-to-win main event at The Mag, McCreadie took the lead from polesitter Billy Moyer Jr. of Batesville, Ark., midway through the feature and pulled away to win by a comfortable 5.936 seconds. Moyer held on to finish second ahead of sixth-starting Mike Marlar of Winfield, Tenn., while Gray Court, S.C.’s Chris Madden charged from 11th to finish fourth. Spencer Hughes of Meridian, Miss., completed the top five after slipping two spots from his inside row two starting spot.

“This (car) is brand new. We only hot lapped this one last night,” said McCreadie after wrapping up his 11th win of the season. “We thought, well, we’ll just run it and see how it stacks up and if it’s comfortable we’ll run it again and if not we’ll bring the car out that we’ve been running the second half of the season. I can’t argue with how it was. I gotta thank (crew members) Phil and J.C., and obviously Bilstein Shocks.

“We’ve really been working hard on shocks to get better and better and I think it’s starting to really show the last half of the year. The Longhorn Chassis, Cornett power, this whole program, it’s a dream to drive right now and I’m very lucky. I had to come from New York and these guys came from (North) Carolina and I haven’t seen them since Charlotte (on Nov. 5), so all the hard work is the guys down there and I get to drive it. So it’s a pretty neat deal for me.”

Moyer darted into the lead on the opening green, with McCreadie, Hughes, Dennis Erb Jr. of Carpentersville, Ill., and Marlar in tow.Taking advantage of the good bit of traction still present along the inside groove of the 4/10-mile oval, Moyer pulled away to lead by a couple of car lengths. But after two early cautions slowed the pace, a lengthy green flag run gave McCreadie plenty of time to run the leader back down.

He caught Moyer in traffic and made his winning move near the halfway mark.

“It was tough because we thought (the track) might have been rubbering in the (consolation race) because the times leveled off,” said McCreadie. “Usually that’s a sign. Once the times stop getting slower and slower and slower they start getting equal and then they start coming the other way. But it didn’t really. It just took a little streak there, a little streak into (turn) three. For me, Billy was where I wanted to be, but once we got by him, I didn’t dare move. Like the middle where he was arcing was the spot to be I thought.”

Moyer struggled to keep up with McCreadie, though he didn’t have too much of an issue keeping Marlar behind him. When asked what it would have taken to have won the race, a good-spirited Moyer jokingly quipped, “(If) Timmy probably stayed in New York.”

Indeed, McCreadie managed to find a distant southern zip code to get lost in.

“I didn’t have nothing for him,” said Moyer. “The start, I seen the strip down there. I could get the jump. I figured I’d get the jump as long as I didn’t buzz the tire because the front straightaway had a lot of grip down low. I was just trying to be wide without trying to wreck him to. That guy doesn’t get enough credit for all the races he’s won and the different types of sports. (Kyle) Larson’s a heck of a driver, but that guy right there doesn’t get near enough credit for the versatility he is.

“He doesn’t run nobody over, so I didn’t want to put him in a yuke tire or nothing like that, so I was just trying to be wide. Then once he got by me, I don’t even know where he went. I couldn’t see him and I knew Marlar was probably on me. He’s a friend of mine too and I knew he wasn’t gonna rough you up. I just tried to not miss that bottom and go from there.”

“I wasn’t hardly as fast as Timmy or Junior there,” said Marlar. “Junior just got held up a little bit in traffic and I took a look, but when I didn’t get him, he was gone after that. Them guys did a good job. Timmy was really fast, so he’s gonna be really tough to beat (Saturday) night. But it was a fun race. I love it when the track’s like that. It’s really technical and easy to overdrive your car and be doing stupid stuff (that) you don’t even realize out there.”

Notes: Tim McCreadie was quick to give thanks to his car owners as well as Kevin Rumley and Rumley’s ailing father Lee Roy. “This whole deal this year with (car owners) Donald and Gena (Bradsher) … they’re watching and Kevin (Rumley) is watching, Rumley, his dad (Lee Roy) is unfortunately in poor health,” said McCreadie. :”We’ve had a lot of people in poor health this year. But Lee Roy, he’s one of the best that’s ever done it and one of the greatest owners that’s been around and his son’s not far off. I just wanted to give a shot out to them because it’s never easy to deal with any of us getting old.” … Tanner English of Benton, Ky., blew a motor in hot laps and loaded up for a return trip to the Bluegrass State. … The race was slowed by two cautions: a spin by Rick Rickman after the hometown driver got into an infield tire barrier and Dane Dacus, of Lakeland, Tenn., who slowed with a flat on lap four. … There were 18 races between McCreadie’s fourth win of the season — the inaugural Dirt Late Model Steam at Eldora Speedway on June 6 — and his fifth victory of 2020 — the 37th North-South 100, but only eight or less between each of his victories since. … Jeremy Conaway of Springfield, Ill., experienced mechanical trouble and called it a weekend.