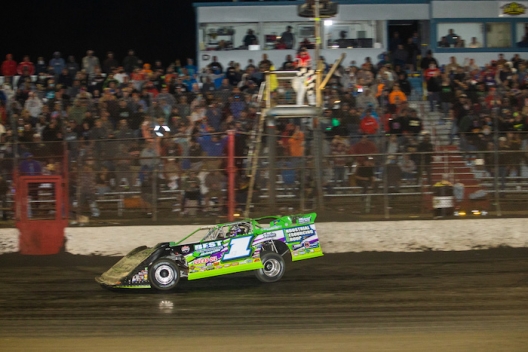 GIBSONTON, Fla. — After his up-and-down week at East Bay Raceway Park’s 45th annual Wrisco Winternationals hit rock bottom with his disqualification from Friday’s event, Tyler Erb made sure to end the six-race miniseries on as high a note as possible in Saturday’s finale.

Taking advantage of Tim McCreadie’s slip up on a lap-32 restart, Erb of New Waverly, Texas, retook the lead of Saturday’s 50-lap Lucas Oil Late Model Dirt Series feature and later held off Jonathan Davenport’s final-lap challenge to earn $15,000 for his second victory of the week at the third-mile Tampa-area track.

Erb’s fourth-career Winternationals victory marked a dramatic turnaround from the position he found himself in a little more than 24 hours earlier when following a tight heat race battle with Mason Zeigler of Chalk Hill, Pa., an angry Erb made contact with Zeigler’s car on the race’s cool down lap and was disqualified from the remainder of the night by Lucas Oil Series officials.

The disqualification may have been a setback, but it also helped motivate Erb in Saturday night performance.

“It’s a frustrating week here when you have a really fast car and things just don’t go your way,” said Erb, who started his week at East Bay by slamming the wall during Sunday’s practice session before rebounding to win Tuesday’s feature. “I hate to say I thrive on controversy like that, but it definitely lights a fire underneath me when there’s a lot of naysayers and people on Twitter.”

Erb’s Best Performance Rocket Chassis crossed the finish line 0.322 seconds ahead of the hard-charging Davenport, who erased a more than two-second gap over the final eight circuits before coming up short and settling for the runner-up finish. Second-starting Brandon Sheppard of New Berlin, Ill., finished third after leading the race’s first 13 laps, while McCreadie of Watertown, N.Y., slid back to fourth after leading laps 20-32. Hudson O’Neal of Martinsville, Ind., rounded out the top five after starting 13th.

There were no signs of Friday’s frustration in Erb’s Saturday performance. The 24-year-old Lucas Oil Series regular was determined from the outset of the race, advancing from his fourth starting spot to the lead by lap 14 before McCreadie’s high-side run on a lap-20 restart shuffled Erb back to second. But Erb held steady and was in position to sneak under McCreadie when he slipped high exiting turn two on another restart 12 laps later.

“The top was pretty hard to run there and I gave up the lead on a restart. I was like ‘Man, that might be the race’ because McCreadie drove off and was really good,” said Erb, who scored the 11th Lucas Oil Series victory of his career. “I really didn’t have nothing to lose on the restart so I picked the top and got a really good run. .. He just kind of missed the bottom getting into (turn) one and I was able to get by him.”

Erb’s perfect end to his not-so-perfect week at East Bay was nearly spoiled Davenport’s late rally. The three-time Lucas Oil Series champion from Blairsville, Ga., chased down Erb as he neared slower traffic in the race’s closing laps. Moving to the high groove on the final lap, Davenport got a strong run coming down the homestretch only to fall just short at the finish.

“I was just trying not to burn my stuff down,” Erb said of his slower pace during the race’s late stages. “My lead got a little close there at the end. I just tried to hit my marks and got real wide that last corner and hoped for the best.”

Davenport’s runner-up finish felt much like a win for the 37-year-old veteran after he struggled all week at East Bay with an average finish of 17th over the first five features. Davenport thought he could’ve had a better chance at winning Saturday’s race if he had moved his Double L Motorsports Longhorn Chassis to the track’s treacherous high line a few laps earlier, but he felt it was better not to risk it.

“He was pretty good, but we was reeling him in there at the end,” Davenport said. “I probably should’ve tried to move around a little bit earlier, but with the week we’ve had I just went ahead and stuck in there for second. I thought why not for the last lap and throwed a Hail Mary at it. We’ve got one car torn up … so I didn’t want to tear another one up trying to get to the lead when we finally had a good points night here.”

Sheppard’s third-place finish was also a rebound of sorts after the four-time and defending World of Outlaws Morton Buildings Late Model Series champion struggled through much of the week. He opened the Winternationals with a runner-up finish on Monday but had finishes of 19th, 12th, ninth and 15th before returning to the podium in the finale.

“We had a good car at the beginning of the week. We struggled in the middle of the week, but we got it back going here at the end,” Sheppard said of his Rocket Chassis house car team. “We had fun out there tonight. We got to lapped traffic there pretty heavy when I was leading and Terbo got by and McCreadie got by me. … We never really got to lapped traffic again to be able to dice it up. I was hoping we would, but the caution kept coming out.”

The race was slowed by six cautions. The only serious accident was the first caution on lap two when Mike Marlar of Winfield, Tenn., got too high exiting turn four and made heavy contact with the wall. Josh Richards of Shinnston, W.Va., was collected in the incident. Richards continued running while Marlar limped his battered machine to the pits.

Notes: Erb earned his fourth victory in 13 starts this season. He also won two races during the six-race Keyser Manufacturing Wild West Shootout miniseries earlier this month at FK Rod Ends Arizona Speedway in Queen Creek, Ariz. … Erb became the first repeat winner on the Lucas Oil tour this season. … Eighth-finishing Brandon Overton of Evans, Ga., leaves East Bay with the Lucas Oil Series points lead after finishing among the top 10 in each of the tour’s first seven races. … Twenty-one of the race’s 30 starters were running at the finish, all on the lead lap.

The 45th Wrisco Industries Winternationals concludes on Saturday that saw partly cloudy skies and a high temperature rising into the mid-70s. … Saturday’s 71-car field is the smallest of the week, but it keeps the entire week above the 70 mark. … If Brandon Sheppard of New Berlin, Ill., fails to reach victory lane tonight, it will mark just the second time he’s gone winless in East Bay’s Winternationals since his current stint as the Rocket Chassis house car driver began in 2017. He won once in ’17, twice in ’18 and three times last year. … Sheppard will chase Saturday's victory driving a new Rocket house car. ... Friday-night winner Brandon Overton of Evans, Ga., will bid to become the fourth driver to end the Winternationals with back-to-back wins on Friday and Saturday nights since the event expanded to six races in 2000. He would join Steve Francis (2006), Billy Moyer (2008 and ’15) and Jonathan Davenport (2019). … Blairsville, Ga.’s Davenport, who has struggled through a tangle-filled Winternationals with no finish better than 14th, has pulled out a fresh Double L Motorsports No. 49 for the finale. It’s the Longhorn mount he debuted last November at Cherokee Speedway in Gaffney, S.C., but hasn’t entered in a race since then. … Mason Zeigler of Chalk Hill, Pa., whose bought Friday night included run-ins with both Tyler Erb of New Waverly, Texas, and Chase Junghans of Manhattan, Kan., will also drive his second XR1 Rocket car for the first time this week. It’s the same machine he piloted to a $12,000 Lucas Oil Series victory in last year’s Friday-night Winternationals feature at East Bay. … While Zack Dohm has parked his No. 17 for the week due to electrical issues, the Cross Lanes, W.Va., driver will return to action tonight behind the wheel of the Longhorn car his father Tim debuted earlier this week.