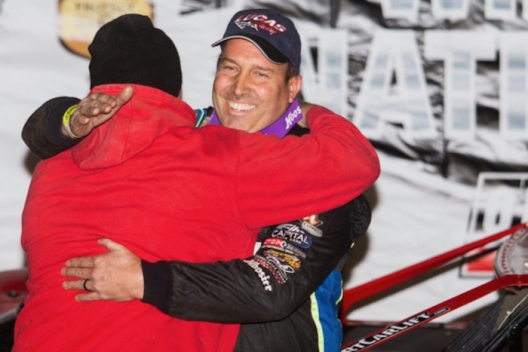 OCALA, Fla. — Things are finally starting to look up for Shane Clanton. After soldiering through a disappointing 2020 race season only to be hit by multiple serious heath problems for himself and his family during the offseason, the veteran racer finally had a turn of good fortune in Tuesday night’s Lucas Oil Late Model Dirt Series Speedweeks finale at Bubba Raceway Park.

Jumping to the high side on a mid-race restart, Clanton, the former World of Outlaws Morton Buildings Late Model Series champion from Zebulon, Ga., charged around Bobby Pierce of Oakwood, Ill., to take the lead on lap 22 of Tuesday's 40-lap feature and led the remaining distance to earn $10,000 for his first national touring victory since September 20, 2019.

Along with ending his lengthy drought, the victory was a welcomed bright spot for Clanton, whose trying offseason included his wife Michelle being diagnosed with breast cancer in November before Clanton himself contracted Covid-19 over the holidays and ended up hospitalized for eight days in early January.

“Last year we went winless on the series,” said Clanton, who planned to travel overnight Tuesday to in order to accompany his wife to her scheduled cancer treatment on Wednesday. “We got a win early this year. It makes this year better already.”

Earning the fifth Lucas Oil Series victory of his career and his first since winning a Knoxville Late Model Nationals preliminary night feature in 2019, Clanton took the checkers 0.569 seconds ahead of Pierce, who settled for second after leading laps nine through 21. Fifth-starting Tanner English of Benton, Ky., was just behind Pierce in third, while Tim McCreadie of Watertown, N.Y., advanced from seventh to finish fourth. Polesitter Jimmy Owens of Newport, Tenn., slid back to fifth after leading the race’s first eight circuits.

Dropping back as far as fourth in the race’s opening laps, the second-starting Clanton began his march forward as the high groove around the unique D-shape track finally began to improve after lap 10. He drove his Skyline Motorsports Capital Race Car by a fading Owens for second on lap 16 and was sizing up Pierce for a pass for the lead before a caution slowed his momentum with 18 laps complete.

Clanton returned to the high line when the race went back green and quickly began to make his move on the low-running Pierce. After pulling alongside Pierce a lap earlier, Clanton edged out front with a hard drive into turn three on lap 22 and pulled ahead exiting turn four.

Clanton held command from there, maintaining a slight gap over Pierce through traffic as the race ran caution free for the remaining distance.

“Hats off to (track co-owner) Bubba (Clem) and his guys for giving us two grooves there,” said Clanton, whose victory improved on his 12th-place finish in Monday’s doubleheader opener at Ocala and gave him his second top five in the nine events that made up the Lucas Oil tour’s Speedweeks slate. “The top took a little bit to come in. It was a little greasy up there, but when it did, man, it come alive. We worked our butts off trying to get by Bobby there and made the right move at the right time I think.

“It’s a tricky place to get through (turns) three and four down there, but we done pretty good I guess tonight. Last night we sucked, but we changed a lot of things and it worked out.”

Pierce, whose runner-up performance gave him his first podium finish in 12 starts this season, was happy with his effort but wished he had made a move to black Clanton’s high-side run that won him the race.

“Getting second here, the third time I’ve raced this track is pretty good,” Pierce said. “I probably needed to move up there … I know (crewman) Cody (Mallory) was probably showing me. It’s just really hard to see (signals from crew members) here, but I think overall Shane was just a little bit better. He’s always really good at these type racetracks.”

Wrapping up his Speedweeks trip with his best performance of the season thus far, English matched his career-best Lucas Oil Series performance in finishing third.

“This is pretty big to be standing here tonight, especially my second race at this track,” said English, who earned a pair of third-place finishes during his Lucas Oil rookie campaign in 2020. “We’ll take it after the Speedweeks we’ve had. We’ve ran good and ran up front, but just had a lot of bad luck.

“You just gotta be there at the end to have good finishes and just be smooth and hit your makes every lap. These guys don’t mess up, so when they do you have to be there to take advantage of it. That’s how we got past a few cars. They just slipped up there coming off of two.”

Notes: The was completed in 19 minutes, 28 seconds and wrapped up just before 9 p.m. Eastern time. … Twenty-four of the race’s 28 starters were running at the finish, all of them on the lead lap. … Clanton had one victory in 2020, an unsanctioned $4,000 special at Tri-County Racetrack in Brasstown, N.C., on April 30. … Owens’s fifth-place finish was nearly derailed by a flat right-rear tire that blew just after he crossed the finish line. Owens had previously smacked the backstretch wall with the right-rear corner of his car just after he lost the lead to Pierce on lap nine. … Lucas Oil Series points leader Brandon Overton of Evans, Ga., recorded his first finish outside the top 10 this season in finishing 19th. He still wrapped up the Wrisco Winternationals points title for earning the most points over the Lucas Oil tour’s entire nine-race Speedweeks slate.

While the weather for Tuesday’s Lucas Oil Series Speedweeks finale at Bubba Raceway Park is improved from Monday’s extremely windy and cold conditions, it’s still not a typical Florida winter day. The sun has shined all day but temperatures only rose into the low 50s and a brisk breeze remains. … Lucas Oil Series officials did a superb job pushing Monday’s single-division program along on a cold night, bringing the feature to an end at 8:36 p.m. They plan to employ the same efficiency tonight with temps falling after sunset. … Tuesday’s field numbers 46 cars, down three from Monday. Not returning to compete tonight are Doug Drown, Spencer Hughes and Chris Nash. … Jonathan Davenport of Blairsville, Ga., escaped his disastrous lap-13 restart trouble with only rear bodywork damage, but his Double L Motorsports crew had to repair a bent rack and front spindle due to a scrape the three-time Lucas Oil Series champion with Shane Clanton of Zebulon, Ga., later in the race. … Clanton said he plans to return home to Georgia after tonight’s race to take a break before coming back to Florida for the Feb. 8-13 DIRTcar Nationals at Barberville’s Volusia Speedway Park. He said he wants to be home because his wife, Michelle, is beginning her second round of treatments for breast cancer on Wednesday. … It’s almost a given that some drivers are magnets for each other at certain times, and such might be the case early this season with Monday-night feature winner Ricky Thornton Jr. of Chandler, Ariz., and Brian Shirley of Chatham, Ill., who spun out of third place after turn-two contact from Thornton on lap 13 of Monday’s headliner. You’ll recall that the two drivers tangled in Jan. 15’s Keyser Manufacturing Wild West Shootout feature at FK Rod Ends Speedway while battling for third place; Thornton felt he was swept up in a failed slider attempt by Shirley, while Shirley thought Thornton should have hit the brakes to avoid hitting him like he had done when Thornton came up the track on the homestretch.