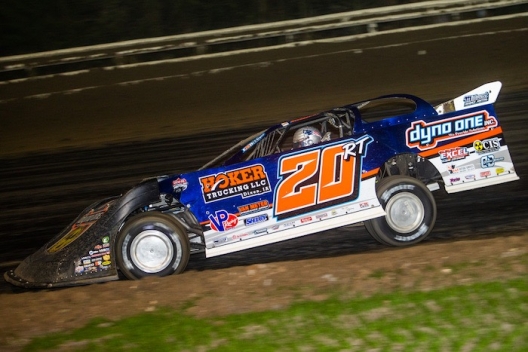 OCALA, FLA. — Ricky Thornton Jr.’s Speedweeks turnaround is complete. After starting his first trip to Florida’s annual stretch of early-season events by failing to make the feature lineup in his first two outings, the Lucas Oil Late Model Dirt Series rookie continued his return to form in the second half of the national tour’s Speedweeks slate by winning Monday’s feature at Bubba Raceway Park.

Taking advantage of back-to-back cautions that that took out multiple contenders ahead of him, the 10th-starting Thornton moved from fourth to the lead on lap 14 of the 40-lap race and led the remaining distance to earn a $10,000 victory in the first leg of a doubleheader that wraps up the Lucas Oil tour’s Speedweeks schedule of nine events over 11 days.

“We struggled there at All-Tech and early in the week at East Bay. It was probably me more than the car,” said Thornton, who missed the feature lineup in both the Lucas Oil Series season opener Jan. 23 at All-Tech Raceway in Ellisville, Fla., and the Jan. 25 opening round of the six-race Wrisco Winternationals at East Bay Raceway Park in Gibsonton, Fla., before picking up momentum by logging four straight top-10 finishes to end his week at East Bay. “The end at East Bay was definitely a confidence booster. To come here and run as good as we did, this place is definitely tricky so it definitely says a lot about our team and how excited we are for the year.”

Thornton took the checkers 1.101 seconds ahead of third-starting Mike Marlar of Winfield, Tenn., who faded early in the race before recovering to pressure Thornton in the closing laps on his way to a runner-up finish. Eighth-starting Hudson O’Neal of Martinsville, Ind., was just behind Marlar in the third spot, while Devin Moran of Dresden, Ohio, charged from 14th to finish fourth and Lucas Oil Series points leader Brandon Overton of Evans, Ga., moved up from 12th to round out the top five.

Earning his first ever Speedweeks victory and the second Lucas Oil Series win of his career was no easy task for the 30-year-old Thornton, who entered the 2021 season with high expectations after his breakout 2020 campaign in his SSI Motorsports Longhorn. Advancing from his 10th starting spot into the top five early in the race, Thornton was battling polesitter Brian Shirley of Chatham, Ill., for third on lap 13 when contact from the front of Thornton’s car to the right-rear corner of Shirley’s machine sent Shirley spinning and knocked the veteran Illinois racer out of contention.

“I definitely got to apologize to Brian Shirley,” Thornton said of the contact. “I turned him around over there. I definitely didn’t mean to. I thought I had him cleared and at the last second my nose just barely caught his quarter-panel. I’m definitely sorry for that and hopefully we can keep racing him hard.”

Continuing on to assume the third spot, Thornton avoided a melee on the ensuing restart that occurred when leader Jonathan Davenport of Blairsville, Ga., locked his brakes and killed his engine entering turn one. That set off a scramble behind him that collected second-running Brandon Sheppard of New Berlin, Ill., along with Jimmy Owens of Newport, Tenn., and Josh Richards of Shinnston, W.Va., who were both running in the top 10. Although Davenport’s car never stopped moving, he was charged with the caution by Lucas Oil Series officials and sent to the tail of the field.

The back-to-back lap-13 mishaps moved Thornton to lead, but his work still wasn’t complete. The former modified standout had to first turn back heavy pressure from O’Neal through the race’s middle stages and later survived Marlar’s late challenge in traffic before a caution with three laps remaining gave him clear track ahead and smooth sailing to victory.

The caution was a momentum killer for Marlar, who had a high-side run on Thornton before Tyler Erb’s turn-two spinout slowed the field.

“Ricky was good. We were about the same speed, but he was kind of in a bad position with all that traffic and I had been kind of testing the waters on the high side,” said Marlar, who like Thornton had a rough start to his Speedweeks campaign with only two top 10s in the first seven Lucas Oil Series races. “I had a move in progress there when Tyler did whatever happened with him and he stopped.

“I think I could’ve done something around the outside, but we’ll never know. Congratulations to Ricky. He had rough week like me down there at East Bay too. We both needed a good night tonight.”

Unlike the two drivers finishing ahead of him, O’Neal’s solid run didn’t turnaround a slow start to the year. The 20-year-old driver has been impressive in his first season with Tennessee-based Double Down Motorsports with  his third-place finish at Ocala marking his third podium result and his sixth top 10.

“It’s pretty awesome to come out here and have this kind of success early and be up here competing for wins,” said O’Neal, whose hot start to the season includes a victory in the East Bay opener. “These guys went a little different on tire than we did tonight and it would kill me for the first five laps on the restarts. Then my tire would go and I’d be able to drive back to them. That’s just part of the game. Congrats to Ricky and Mike. It was a fun race.”

Notes: Thornton became the seventh different winner in eight Lucas Oil Series races this season. … The race was slowed by a total of six cautions. The first appeared with three laps complete when John Baker of Norman Park, Ga., and Tyler Bruening of Decorah, Iowa, tangled. … The only two-time winner so far this season, Tyler Erb, was involved in all of the final three cautions. He finished 21st. … Davenport finished 17th. … Continuing his frustrating start to the 2021 season, the lap-13 tangle ended Owens’s night. The defending Lucas Oil Series champion was last in the rundown in 28th. … Twenty-four of the race’s 24 starters were running at the finish, all of them on the lead lap.

Overnight thunderstorms that rumbled across Florida have ushered in decidedly Northern-like weather for Monday’s first of two Lucas Oil Late Model Dirt Series events at Bubba Raceway Park. Everyone is bundled up on a day that has seen the high temperature barely reach 50 under cloudy skies, occasional drizzle and steady 20 mph winds. Temperatures are expected to drop into the 40s — with wind-chill factors even lower — during the evening. … A 49-car field is signed in for Monday’s action, up 12 entries from the last Lucas Oil Series race contested at the 3/8-mile, D-shaped oval in 2018. … Past BRP winners during Speedweeks on hand include Josh Richards of Shinnston, W.Va. (World of Outlaws in 2012, ’13 and ’15); Jonathan Davenport of Blairsville, Ga. (Lucas Oil in 2016 and ’18); Brandon Sheppard of New Berlin, Ill. (WoO in 2014, Lucas Oil in ’17); Rick Eckert of York, Pa. (WoO in ’12); and Frank Heckenast Jr. of Frankfurt, Ill. (WoO in 2015). … Chris Nash of White Pigeon, Mich., is making his first start of Speedweeks while Clay Harris of Jupiter, Fla., is back in action for the first time since Jan. 23’s Lucas Oil show at All-Tech Raceway in Ellisville, Fla. … Big-block modified star and NASCAR Camping World Truck Series regular Stewart Friesen, a native of Niagara-on-the-Lake, Ont., now living in Sprakers, N.Y., returns to Dirt Late Model competition for the first time since making his second career start in the division one week ago at East Bay Raceway Park in Gibsonton, Fla. The 37-year-old enters the evening with high hopes that running three Short Track Super Series-sanctioned Northeast modified events at BRP from Jan. 28-30 will give him a boost. His results in the modified events ran the gamut: he finished third on Thursday, earned a $6,000 victory on Friday and crashed hard going for the lead in Saturday’s feature; his car slammed sideways into the tractor tire protecting the turn-one wall, wiping out his car and leaving his body sore. “I feel like an old man today,” Friesen said.