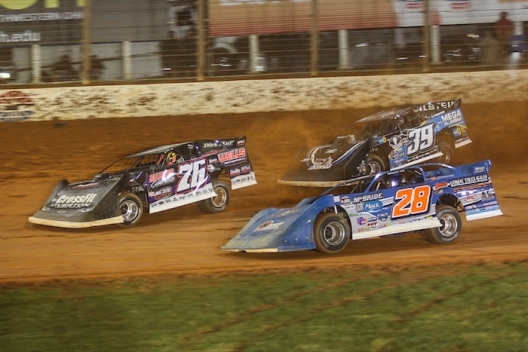 CONCORD, N.C. — During a year when the coronavirus has turned the world upside down, everyone is ready for 2021. Everyone, that is, except Brandon Overton, apparently.

The 29-year-old Evans, Ga., driver dominated the final 33 laps of Wednesday’s World of Outlaws Morton Buildings Late Model Series action at The Dirt Track at Charlotte and, even for  just a moment, forgot all about the Covid-19 pandemic.

Indeed the racing has never been better for Overton, who took the point from race-long leader Kyle Strickler on the 18th lap and dominated the rest of the 50-lapper, taking the checkers 2.736 seconds ahead of runner-up Dennis Erb Jr. of Carpentersville, Ill.

The eighth-starting Overton’s $12,000 victory stretched a personal winning streak to fourth in a row as he tallied his 25th overall victory of the season and sixth on the WoO circuit.

Erb improved seven positions to finish second after a lengthy duel with polesitter Tim McCreadie of Watertown, N.Y., who settled for third. Ten-time WoO sprint car champion Donny Schatz rallied from the fifth row to fourth and Brandon Sheppard of New Berlin, Ill., on the night he officially clinched his third WoO title, recovered from a lap-22 pit stop to round out the top five in the 26-car field.

Strickler took command from outside the front row and led early, but he retired before the midpoint after blowing a right-rear tire on lap 22.

Once Overton dispatched of Strickler, no one could keep up the the driver who earlier this season had a stretch of victories in five consecutive WoO starts.

“Man, what a helluva race car,” Overton said in victory lane. His only disappointment was winning in front of a thin crowd because Charlotte’s traditional World Finals, which annually draws a packed house, was scrapped and replaced with a limited-capacity event.

“You know, I appreciate everybody that’s up there in this stands,” said Overton, who last three of 13 career WoO victories have come in the Carolinas. “This would be my luck to win it (with a small crowd). Since I was a little kid we’ve been coming over here (and then) trying to win this thing. I’m sure everybody’s back home is watching.”

Erb, who got the second spot for good on the 34th lap, scored his 11th top-five finish of the season on the circuit and improved his prospects of rising from his sixth-place spot in the series standings.

“We had a good car there. (I was) running around the bottom, the preferred line for the night. I went a little softer on tires and there at the end it kind of hurt me, but I was able to get up to the front pretty quick,” said. “To get up in there, try to get up in the top five there, hopefully we’ll get another good strong run tomorrow night.”

McCreadie blamed his tire selection on his dropping two spots to finish third.

“It’s a shame, I shouldn’t be allowed to pick these tires, because I’ve been wrong two weeks in a row,” McCreadie said. “I mean, last week, we went way too hard, today we went in the middle, and got beat by two guys who had different rubber on. It’s just mind-numbing, a little bit. But we’ll go back to work with this Bilstein Longhorn car.

“(Selecting tires at Charlotte) been a no-brainer for probably half a decade for what to put on for a right-rear. I just think tonight, you get wrapped up in a lot of things: ’Oh, there’s no cars here, there’s not as much racing on (the track), A, B and C and then you don’t just put the right-rear on that (Overton) has on that has won probably the last 15 shows here. Hat’s off to them, I know that Brandon, it takes a big move to do that, because that’s a hard step of a tire, and congrats to Dennis and everybody and we’ll go again tomorrow.”

Notes: Three-time series champion Darrell Lanigan complained of a headache after hitting the wall left-side first in heat race action. He was checked out for a possible concussion at a nearby hospital … Provisional starter Ashton Winger started 25th and ran as high as seventh before slowing for a lap-36 yellow. … Jimmy Owens, a seven-time WoO winner at Charlotte, lost a driveshaft and retired after 22 laps. … NASCAR and open-wheel star Kyle Larson, who lowered the track record in qualifying, retired after 19 laps. … Scott Bloomquist didn’t get a qualifying lap when he ran into mechanical problems before getting on the clock, then his car went up in smoke early in the second heat race; Bloomquist turned down an offered provisional starting spot. … Tyler Millwood was leading the first consolation and heading for the white flag when he had a flat tire. With just a few cars on the track he rejoined the field and won the consy. He finished 14th in the main event.

A field of 55 cars was signed in for Wednesday’s opener of the World of Outlaws Morton Buildings Late Model Series-sanctioned Last Call doubleheader. … With all entrants required to pre-register for the event run with Covid-19 precautions (including a mask requirement for attendees) in place, only two drivers on the list — Allen Murray and Adam Yarbrough — are not on hand. Johnny Pursley, however, was a last-minute addition. … All the Dirt Late Model teams are parked in Charlotte’s upper pit area that is normally occupied by the sprint cars during the World Finals. … Brandon Sheppard of New Berlin, Ill., officially clinched his second straight and third WoO title in the last four years when he drew his qualifying pill. … Kyle Strickler of Mooresville, N.C., is hoping to duplicate his winning effort in last Saturday night’s Drydene World Dirt Track Championship modified feature at Charlotte rather than his performance in 2019’s World Finals. “Last year here was my first race with my own car and we were terrible,” said Strickler, who got his repaired engine back from Clements on Monday and bolted it in his Longhorn machine yesterday. … Open-wheel stars Kyle Larson of Elk Grove, Calif., and Donny Schatz of Fargo, N.D., are in the field as they begin four straight nights of duty at the Last Call. Larson is making his fourth start in the K&L Rumley Enterprises No. 6 while Schatz is behind the wheel of the his family-owned No. 15 that he enters in selected full-fender events. … Tyler Carpenter of Parkersburg, W.Va., has entered the Jackie Boggs lookalike car that he debuted last weekend as a tribute to the Kentucky veteran who died on Oct. 24. … World Racing Group marketing director and former WoO Late Model Series director Chris Dolack, who is undergoing treatment for a form of lymphoma, addressed the drivers’ meeting to thank the racing community for the support he’s received. ... Brandon Overton of Evans, Ga., entered Charlotte's opener on a personal three-race winning streak.