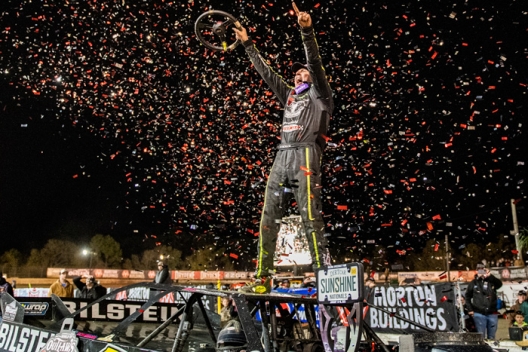 With the exception of a lap-10 challenge from fellow front-row starter Ross Bailes, Strickler was in control all the way at the half-mile oval — until a restart with six laps remaining.

Suddenly, Hall of Famer Scott Bloomquist charged under Strickler in turns one and two and turned up the heat on the Mooresville, N.C., driver.

"I know that there's nothing like the best in the business breathing down your (neck) there at the end for your first Outlaw win," Strickler said.

While Bloomquist edged ahead of Strickler down the backstretch multiple times in the closing laps, Strickler held on for his breakthrough 40-lap victory to earn $10,000 in the Sunshine Nationals finale.

"Man, I can't thank all my guys enough for doing this," Strickler said in victory lane, thanking all the supporters of his self-owned Longhorn Chassis. "It's going to make the trip back home a lot easier now."

Mooresburg, Tenn.'s Bloomquist finished 1.165 seconds behind Strickler at the finish while Darrell Lanigan of Union, Ky., who started sixth but fell back as far as 12th, rallied back for a podium finish. Ricky Weiss of Headingley, Manitoba, advanced 11 positions to finish fourth while Jimmy Owens of Newport, Tenn., rounded out the top five.

Bailes, a WoO rookie candidate from Clover, S.C., driving the Florida-based Big Frog Motorsports entry, ran second for 34 laps after starting outside the front row but faded late to finish 12th after slipping over the turn-four banking.

Strickler plans on competing in 2021 on the Lucas Oil Late Model Dirt Series for the fledgling PCC Motorsports team, but he got his season started off with a bang at Volusia, where he also finished third in Thursday's WoO opener.

Strickler raced to the lead at the outset and stuck with the high groove most of the way, using a crossover move on the 10th lap to regain the lead when Bailes used a slide job in turn two to briefly move ahead. But late in the race, Strickler had second thoughts about sticking with the high side with Bloomquist challenging late.

"I could probably do a better job at handling the top, but (Bloomquist) was going to be way better than me on the bottom," he said. "I knew I had to try to go down there and protect and try to stop him. Man, that's awesome, it's a Cinderella story right there to hold him off for my first win. Man this thing is awesome. It was good tonight.

"I just was nervous on the restarts there, because on Thursday, the restarts went to the bottom there at the end, or the middle, and trying to keep up on that top there, I wanted to make sure they didn't get by me or slide me into (turn) one. Actually once I calmed down and started trying to drive the race car the way it should be driven, I got the fear of it being tight and shoving up over the (cushion) out of my head. The car was really good."

Bloomquist appeared to get better throughout the 40 laps, but not quite good enough to complete his pass of Strickler.

"This is one of our new cars and we're real excited about it. We've got another new one that we've almost finished up here that we'll have when we come back next month. We're just going to keep on digging," Bloomquist said. "Our car was excellent. I don't think anybody could run through the middle of (turns) three and four like we could, and I thought we were going to get him there. But he ran a good race and we'll see what happens next time."

Lanigan was never in contention up front, but rallying back to third was a relief after he spun out of the second spot in Thursday's main event.

"We were just in the wrong spot at the beginning," Lanigan said of Saturday's start. "We should've been up there against that cushion. I was just trying to make something work down there, and late in the race actually the bottom started going and we got down there and the car was pretty good.

"I wish we could've taken the other night back, and if we'd have gotten a good finish (Thursday) too, it'd have been a good night. But like I said, all in all, this thing's fun to drive."

Saturday's 40-lapper was slowed by four cautions and a red flag, the first yellow for a bad start and again for a slowing David Breazeale, who gave up the third spot on the 18th lap after losing a driveshaft.

The red appeared on the 23rd lap for a frontstretch melee involving Thursday's runner-up Cade Dillard, Tony Jackson Jr., Ashton Winger and an onrushing Brent Larson, who smashed into Dillard's machine. The Larson and Dillard machines suffered the most damage but no injuries were reported.

Second-half cautions appeared on lap 25 for a Boom Briggs spin and lap 34 for a slowing Ryan Gustin.

Notes: Strickler notched his first victory since a Sept. 17, 2020, Lucas Oil triumph at I-80 Speedway in Greenwood, Neb. ... Stricker's right-rear tire went flat in victory lane. ... Nineteen cars were running at the finish, all on the lead lap.

Kyle Strickler, Thursday's third-place finisher, drew the pole position for the 40-lap feature and he'll start alongside Ross Bailes. ... Thursday's runner-up Cade Dillard struggled throughout prelims and was forced to take a provisional starting spot for the main event. ... Ashton Winger’s opening-weekend struggles continued in tonight’s prelims. Without a backup car, the 2020 WoO Rookie of the Year had to borrow Mike Collins’s car to run Thursday’s feature. His crew put their backup motor in the car for Saturday, but haven’t got it running quite up to speed. After a poor qualifying effort, he pulled in early from his heat and will likely need a provisional to start the feature. ... Tony Jackson Jr.’s heat race demise was caused by front end suspension issues suffered when he tagged the wall. His crew had made repairs for him to start from the tail of a consolation race and he managed to get the third and final transfer spot.

Saturday’s program concludes the World of Outlaws tour’s season-opening weekend. … Kyle Bronson of Brandon, Fla., won Thursday’s season opener, earning his second career series victory. His first win also came at Volusia in 2014. … Friday’s race was rained out after hot laps. Along with the WoO program, Saturday’s slate also features a $10,000-to-win show for 604 Crate Late Models, and separate programs for 602 Crate Late Models and Limited Late Models. … Before Friday’s rainout after hot laps, a total of 158 Late Models was signed in among four divisions: 38 WoO Late Models, 61 604 Crate Late Models, 30 602 Late Models, and 29 Florida Late Models. … Debuting his new self-designed chassis, 2020 WoO points runner-up Ricky Weiss of Headingley, Manitoba, is looking to end an up-and-down weekend on the upside after two run-ins with the turn-three wall. Weiss’s weekend got off to a tough start when he got into the wall in Thursday’s qualifying, and he had another bout with the same wall in hot laps before Friday’s rainout. Fortunately for Weiss, the highlight of his weekend so far came when it mattered most; he rallied from 23rd to seventh in Thursday’s feature. Friday's incident forced him into his backup car, a Bloomquist Race Car. … Tim McCreadie’s weekend at Volusia has come to a close. He left after Friday’s rainout to head to Tulsa, Okla., where he’ll try to advance from a B-Main into the Lucas Oil Chili Bowl Nationals main event. McCreadie, who won the famous open-wheel midget race in 2006, finished eighth in a prelim night feature in Tulsa on Monday before making the quick trip to Florida to start his Late Model season Thursday at Volusia. He was running second in Thursday’s WoO feature before engine woes ended his run. … The World of Outlaws will be back at Volusia next month as part of the 50th anniversary of the track’s DIRTcar Nationals. The week-long event concludes Speedweeks with two DIRTcar Late Model events Feb. 8-9 and four nights of WoO events Feb. 10-13.