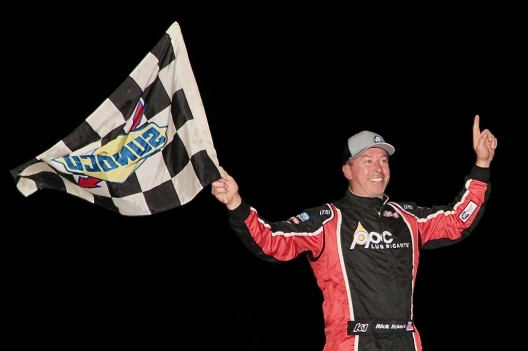 Rick Neff
Rick Eckert celebrates his $7,000 victory at Georgetown Speedway.
What won the race: Rick Eckert of York, Pa., regained the lead from Max Blair on a lap-26 restart and pulled away to score a $7,000 victory in Saturday's 40-lap Mid-Atlantic Championship Weekend feature at Georgetown Speedway. The 54-year-old veteran took the checkered flag 3.074 seconds ahead of Blair, who overtook Eckert on a restart to lead laps 17-26.
Quotable: “I picked the bottom and gave him that top on that (lap-16) restart and he beat me,” Eckert said of Blair. “I knew his tires were better than mine at that point in the race too — he was harder — and then when he picked the top (for the lap-26 restart), all the way down the front straightaway, he’s coming left. So I knew he was coming back to that bottom (into turn one), so I just crossed back out there and went back around him.”
Key notes: Eckert, who registered his third triumph of the 2020 season, pulled a slick maneuver to overtake Blair on the 26th-lap restart, crossing over Blair from the bottom to the top of turn one and surging ahead down the backstretch. ... Eckert's first-place payoff was increased from $5,000 to $7,000 because he paid a pre-race "gambler's fee." ... Blair settled for second one week after winning the Delaware State Dirt Track Championship Super Late Model event at nearby Delaware International Speedway. ... Kyle Hardy made a late-race charge, reaching third on lap 35 and finishing there within striking distance of Blair. ... Polesitter Mike Maresca finished fourth in just his second Dirt Late Model start of the season. ... Ross Robinson fell short of a second straight Mid-Atlantic Championship win, finishing fifth. ... Four caution flags slowed the event, including a final yellow on lap 26 for fifth-running Mark Pettyjohn's flat left-rear tire. ... Jason Covert briefly reached second following a lap-16 restart but slipped to a sixth-place finish.
On the move: Amanda Robinson of Georgetown, Del., started 21st and finished seventh.
Winner's sponsors: Eckert’s Rocket Chassis is powered a Jay Dickens Racing Engine and sponsored by Drydene Performance Products, P.P.C. Lubricants, S.L. Shenberger Dump Truck Service, Firehouse Subs, Allstar Performance, Suburban Bowlerama, M&M Painting & Construction, Eckert Trucking and All About Wraps.
Current weather: Clear, 37°F
Car count: 23
Fast qualifier: Rick Eckert
Time: 18.050 seconds
Polesitter: Mike Maresca
Heat race winners: Rick Eckert, Max Blair, Mark Pettyjohn
Editor's note: Corrects finish with Gary Stuhler eighth and revises rest of order.