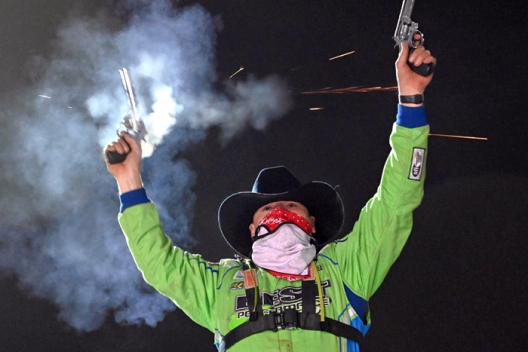 Such was the slide-job battle between Erb and Thornton at the 3/8-mile oval as Erb finally quelled Thornton's repeated bids in the waning moments and grabbed a $5,000 victory in the fourth of six miniseries events.

"Ricky, he did a great job there," a winded Erb said in victory lane after firing the traditional six shooters. "He definitely could've crowded me a couple of times. I felt like I left him a lane and he left me a lane. It's crazy what happens when two people with a little bit of (respect) can race."

While the second-row starters officially had three lead changes between them — those counted at the flagstand — fans counting slide jobs between the two in the last half of the 30-lapper ran out of fingers and toes until Erb secured the victory by 1.380 seconds over the Arizona native Thornton, who captured Saturday's feature.

Two-race winner Jonathan Davenport of Blairsville, Ga., settled for a third-place finish with Bobby Pierce of Oakwood, Ill., and 11th-starting Stormy Scott of Las Cruces, N.M., rounding out the top five in the whirlwind feature.

Jason Papich of Nipomo, Calif., bidding to become the first miniseries winner from California, led the first 12 laps but slapped the wall four laps after losing the lead and fell from contention. Likewise polesitter and fellow front-row starter Jared Landers of Benton, Ark., was running second when he caught the wall, ending his hopes.

"Man, it was awesome," said Erb, who drives for Ohio-based Best Performance Motorsports. "It's a testament to everybody that helps. We've got the best equipment we can ask for. I love going racing with these guys, and that's half the business. I just can't thank everyone that helps us enough."

Papich controlled the race's early stages but had his hands full as the leaders entered traffic and lost the lead on the backstretch when Erb threaded the needle between the high-running Papich and low-running Thornton on the 13th lap. But Thornton slid under Erb exiting turn four to take command and lead three laps before Erb slid under him exiting in turn two on the 16th lap.

After a series of cautions, the pair resumed their battle on the 19th lap with Thornton's lap-20 slide job not enough while a lap-21 slide did the trick. When Thornton got too high off turn two, Erb — and Davenport — were nosed in on him with Erb and Thornton swapping the lead again before Thornton led at the flagstand on lap 22 and held it one more lap.

Erb finally made a slide job work on lap 24, and while Thornton continued his slide-job onslaught, Erb held on the rest of the way. Thornton's last-ditch effort came in turns one and two on the final lap, but it wasn't enough to get ahead of Erb, who streaked to the checkered flag.

"He would slide me, and I would lift or turn down," Erb said. "Finally, when the opportunity got clear to where I could just rim the top all the way around, I did in one and two. He never got in my door getting in, and I definitely chopped getting into one and two a couple times. We went into three and four once and it was pretty close — I had to get on the brakes and kind of got over the cushion — but we held on."

Thornton had decided against making his final bid in turns three and four going for the checkers, figuring things wouldn't turn out well for either of the frontrunners.

"The problem would've been, had I waited until (turns) three and four, he was driving into three so hard, I think we probably would've wrecked if I would've tried to slide him off of four," said Thornton, who said his harder-tire choice gave the softer-tired Erb an edge. "I was actually kind of surprised there at the end. ... I was able to keep pace there and kind of got closer, but I knew my only shot was to fake like I was going to throw a slider, and hope he overdrove and got into the wall. (And that would've) slowed him down the back straightaway and we could've raced into three, but he hit his corner good and that let him get off of (turn) two (successfully).

"It's tough to run second, but we had a pretty fast hot rod. The track was way better than what I thought it was going to be. It was nice they spent the hour or whatever redoing the track," Thornton said, adding that "the whole reason why we came out here was to make sure our stuff was good and kind of get ready for Speedweeks, too, so it makes me excited to get these done and head out there."

Davenport had the best seat in the house for the Erb-Thornton duel, but steering issues after contact with Papich earlier in the race hampered his Double L Motorsports entry.

"After the front end was knocked out, I couldn't just really get in there and drive like I needed to. I couldn't steer around the bottom. It was just good enough to almost keep up, but I just never could turn around the bottom (good enough)," Davenport said. "They was having a helluva show. A couple of times, I was going to try to slide 'em both, but it was just enough to where there was a little bit of slime on the bottom and just slick enough across the middle where you could get hung. I didn't want to take 'em both out. It was pretty exciting, anyway."

Four cautions slowed the action, the first on the second lap when Mike Marlar got sideways in turn one. A slowing Papich drew a lap-17 yellow while Rodney Sanders and Johnny Scott spun off turn four on the 18th lap. The last yellow appeared for Chris Simpson's turn-two spin on the lap-18 restart.

Notes: Officially, Papich and Erb led 12 laps apiece and Thornton led six. ... Keyser Quarter-Million Bonus money is still on the table, but it's shrinking. Davenport has a crack at $25,000 if he can win the final two races (for four total victories) or Thornton and Erb have a crack at $10,000 if they can win two more apiece (for three total). ... Seventeen of 24 starters completed 30 laps.

Friday has brought the best weather conditions of the Wild West Shootout to date with sunny skies continuing but an afternoon high temperature reaching into the mid-70s. … The second half of the six-race WWS begins with a 2021 miniseries-high 62 Super Late Models signed in for action. The car count betters last year’s Friday-night turnout by 20 entries. … Friday’s three-division WWS total car count is over 180. … Billy Moyer of Batesville, Ark. — the winningest driver in the history of Arizona’s January Super Late Model action — has struggled through the first three events with finishes of 12th and ninth plus a DNQ on Wednesday night. He said he hasn’t been able to “get a good balance” with his Capital Race Car on this year’s “different” track conditions. … Another Batesville, Ark., driver piloting a Capital machine, Jared Landers, is hoping to rebound after a scrape with Kyle Beard of Trumann, Ark., during Wednesday night’s feature left him with front-end damage that resulted in him spinning his Jason Rauen-owned No. 98 out of the race. A first-time Capital campaigner, Landers said he’s impressed with Marshall Green’s Woodstock, Ga.-based chassis brand; he noted that it “responds exactly the way it’s supposed to when you make a change.” … With his SSI Motorsports Longhorn car fixed up with new body panels following his Wednesday feature tangle with Brian Shirley of Chatham, Ill., Ricky Thornton Jr. of Chandler, Ariz., is racing Friday with his wife and two young kids in attendance after they flew in Thursday from their home in Adel, Iowa. … Every competitor in action remains eligible for the $10,000 Keyser Manufacturing bonus available to a driver who wins three WWS features, but only Thornton, who won Sunday’s A-main, and two-time winner Jonathan Davenport of Blairsville, Ga., are still chasing the bigger bonus bucks. Davenport can still dream of the $100,000 check for winning five races while J.D. and Thornton have the $25,000 bonus for four wins in play.