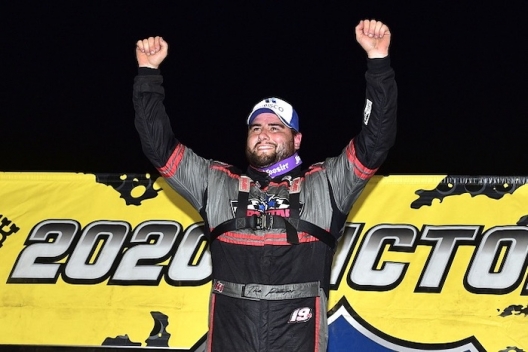 Gustin threw a slider on Billy Moyer going into turn one and made it stick. The daring move propelled the Marshalltown, Iowa, driver to a $3,000 victory on Night One of the MLRA Fall Nationals Presented by Lucas Oil. He also won opening night of the Fall Nationals in 2019.

“Any time you can chase that 21 car (of Moyer) you’re doing something right, for sure,” Gustin said. “To pass him to get a win is pretty cool.”

Gustin slid underneath Moyer in turn one on lap 35 and went on to his second straight MLRA victory. He pulled away over the final five laps to prevail by two seconds and deny the veteran from Batesville, Arkansas, a 44th career MLRA win.

Through 35 laps, Moyer had led all but one lap — when Gustin passed him at the start-finish line on lap 20. That lead lasted only two turns before Moyer wrestled it back.

As the final laps neared, Gustin said he kept looking at the jumbotron in turn three and knew time was running out to make one, decisive attempt.

“I think he was on a little bit softer tire than we were, so I knew the longer the greens were the better we were going to get,” Gustin said. “But a veteran like that, he can deal with a softer tire.

“I kept looking at the board and I was like, ‘I gotta run here, I gotta do something.’ You never know if you’re gonna get that run again. So that’s what we did and it worked out.”

Garrett Alberson was the overall fast qualifier with a time of 14.568. Alberson went on to win his heat race to earn the pole position for the feature.

But it was Moyer, starting to Alberson’s outside, getting the jump at the start and setting the early pace ahead of Oberkramer and Gustin. Alberson, meanwhile, backtracked to seventh by lap four when the first caution flew.

Moyer was leading by one second over Gustin when Justin Duty spun in turn two to bring out a caution. Jason Papich and Chad Simpson made contact while battling for third at the same time, on the opposite end of the track. Papich had to pit with a flat tire as Simpson continued with some bent sheet metal.

Moyer and Gustin broke away by about three seconds over Simpson with Gustin briefly grabbing the lead, at the start-finish line, on lap 20. But Moyer regained it by turn two and was back in front as the duo dueled side by side.

Working the inside, Gustin appeared to re-take the lead on lap 24. But the race’s third caution before that lap was complete sent the restart order back to the previous lap, putting Moyer back to the front with 17 laps remaining.

The race remained green the remaining 15 laps and it came down to a battle between Gustin and Moyer with the Iowan prevailing.

“He ran a little harder tire than we did, but the car needs to be a little bit better,” Moyer said. “We just need to keep working a little bit on it.”

Oberkramer, of Broseley, Mo., backed up his winning performance at Lucas Oil Speedway over Labor Day Weekend in the MLRA Ron Jenkins Memorial with a solid third.

“I’ll stand behind these two guys every night of the week if you want me to,” Oberkramer said of his podium finish, alongside Gustin and Moyer. “Everybody wants to win, but when you get beat by these two guys ... they’ve won lots and lots of features. We’re proud to be here.”

The MLRA championship battle took a turn on lap 25 as points leader Payton Looney, who had advanced from 12th to seventh, suddenly slowed going down the backstretch and exited the track. Looney began the night 57 points in front of Simpson, the 2018 MLRA champion.

The Lucas Oil MLRA has a 50-lap, $5,000-to-win feature on Saturday at Wheatland to conclude the doubleheader.