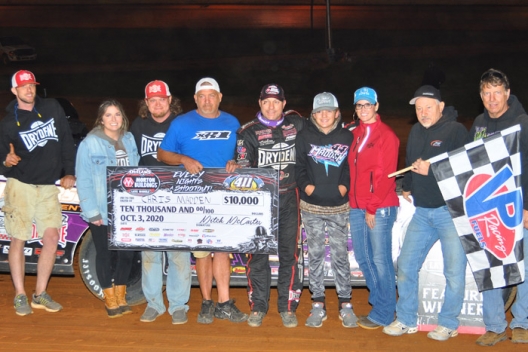 SEYMOUR, Tenn. (Oct. 3) — It didn’t take long for a return to his own race team to pay dividends for Chris Madden. Winning in just his second race since debuting a self-owned Rocket Chassis, Madden of Gray Court, S.C., overtook Cade Dillard of Robeline, La., on lap six of Saturday’s World of Outlaws Morton Buildings Late Model Series feature at 411 Motor Speedway and dominated the remainder of the 50-lap race to score his first series victory since the tour’s season-opening event on Jan. 3.

The pole-starting Madden was never seriously challenged after taking the lead from second-starting Dillard. He held command through two mid-race restarts and deftly navigated slower traffic around the 3/8-mile track on his way to earning $10,000 for the 28th World of Outlaws victory of his career.

“We had a great race car tonight,” said Madden, who just this week announced his departure from Rum Runner Racing to field his own equipment for the first time since 2017. “I got to thank Steve Baker at Rocket for putting this thing together in a hurry this week. If is wasn’t for him and Mark, I thank Mark and his guys for what they’ve done for me to help me along the way.”

Madden took the checkers with an advantage of 1.158 seconds over eighth-starting Ricky Weiss of Headingley, Manitoba, who overtook WoO points leader Brandon Sheppard on the final lap to score the runner-up finish. Sheppard settled for third with Cory Hedgecock of Louden, Tenn., and Ross Bailes of Clover, S.C., rounding out the top five.

Madden’s 411 victory marked his first win of any kind since he claimed the last of his four wins on this year’s Schaeffer’s Oil Southern Nationals on July 24 and is his only national-level win other than the WoO opener. It came one night after Madden debuted his new Rocket with a third-place finish in WoO stop at Cherokee Speedway in Gaffney, S.C.

The moved to his own equipment came after Madden struggled for much of 2020 while driving for three different teams. He started the year driving a second car for Scott Bloomquist Racing before leaving the team in June and joining Milwood Motorsports to run the Southern Nationals tour. Following the Southern Nationals, Madden joined the Coulter family’s Troutman, N.C.-based Rum Runner Racing. But his stint behind the wheel of the team’s Longhorn Chassis last just six weeks and produced no podium finishes.

“This 2020 season has definitely been upside-down for me, but we haven’t quit," Madden said. "We’ve stuck it out and battled hard. My family’s stayed behind me and kept pushing me. My kid keeps tell me, ‘Dad I want you to go go go.’ I love it.”

Weiss began moving forward from his fourth-row starting spot from the outset of the race and broke into the top five by lap 17. He moved to fourth two laps later, but it took him until lap 45 to finally clear Bailes for the third spot. That left him just enough time to catch and pass Sheppard for the second spot, but not enough to challenge Madden for the win.

“Our car was real good,” Weiss said of his Bloomquist Race Car. “Me and Bailes raced each other for about 20 or 25 laps door to door. I just couldn’t quite clear him enough. We’ve been running pretty good with him lately, and you hate to rub someone when you’re having good clean racing. Finally I was able to clear him and got rolling on the bottom. The lapped cars sure made it interesting. I could see the 44 up front and the 1 car. I was able to hit my marks and get close at the end.”

Sheppard, who led 23 laps of Friday’s race at Cherokee before settling for second behind Brandon Overton of Evans, Ga., recorded his fourth straight podium finish on the tour and his 30th top five in 38 series races this season. The two-time series champion is virtually assured of another series title with four features remaining on the tour's 2020 schedule.

“We could maneuver all over the racetrack and I was good all over," Sheppard said of his Rocket Chassis house car. "But just past halfway I got to where I couldn’t run the bottom as good as I needed to because I got a little bit tight. I don’t think I could’ve passed (Madden), but we had a good car all night long so we’re not going to complain with third. We’ll take it and take some notes and move on.”

The race was slowed by two cautions. The first appeared with 13 laps completed when Austin Neely of Tazewell, Tenn., slowed. The second caution was for Dale McDowell of Chickamauga, Ga., who had ran as high as fifth before slowing on lap 27 and leaving the track.

Dillard faded to 10th at the finish after leading the first five laps from the outside of the front row. He finished one spot behind Overton, who was looking for his sixth win in his past six WoO events after claiming Friday’s WoO event at Cherokee.