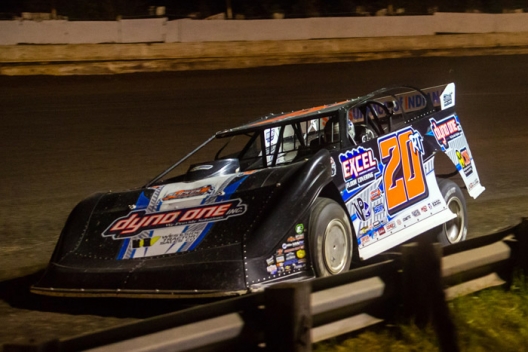 Escaping the rash of tire problems that struck down several contenders, Thornton inherited the lead when both Devin Moran and Tim McCreadie pitted to change flats on lap 82 and cruised away from Josh Richards over the remaining distance to capture the marquee event at Pittsburgh’s Pennsylvania Motor Speedway.

The $20,000 triumph was a breakthrough for the 30-year-old native of Chandler, Ariz., who now lives in Adel, Iowa: his first-ever win on the Lucas Oil Late Model Dirt Series.

Thornton dominated the field after completing his march from the 14th starting spot to the lead in Todd and Vickie Burns’s SSI Motorsports Longhorn Race Car, beating the Clint Bowyer Racing XR1 Rocket piloted by Shinnston, W.Va.’s Richards to the finish line by a commanding margin of 3.122 seconds — a full straightaway on the sprawling half-mile oval — despite a final caution flag that set up a green-white-checkered conclusion.

Richards, 32, started from the outside pole and led laps 17-35 but was forced to relinquish second place following the race’s mandatory fuel stop on lap 40 due to a deflating right-rear tire. Late-race attrition on a rubbered track surface helped him climb all the way back to the runner-up spot, which he reached on lap 88 when Gregg Satterlee of Indiana, Pa., slowed with a flat right-rear tire.

Earl Pearson Jr. of Jacksonville, Fla., finished third in the Black Diamond house car, picking up three spots with an outside surge over the final two circuits. Stormy Scott of Las Cruces, N.M., earned a fourth-place finish — his first top-five run this season on the Lucas Oil Series — driving a brand-new Longhorn car while Michael Norris of Sarver, Pa., rallied from a lap-40 pit stop for a flat tire to place fifth behind the wheel of Todd Cerenzia’s XR1 Rocket.

Dresden, Ohio’s Moran started from the pole position and led laps 1-16 and 36-81 but settled for a ninth-place finish after cutting a left-rear tire and slowing on lap 82. McCreadie led lap 82 before the caution flew for Moran but had to pit before the restart due to a flat right-front tire and only managed a 13th-place finish.

Thornton’s night started inauspiciously in his heat race when he clipped the outside wall and ceded third place to Lucas Oil Series points leader Jimmy Owens of Newport, Tenn., but he made no such mistakes in the century grind. He took a conservative approach to move forward from mid-pack and it worked, landing him in the top five just after the halfway point.

With the PPMS track surface then locking down with a rubber lane on the inside, Thornton found himself with the car — and the right tire — to continue inching toward the front.

“We kind of planned on rolling around the bottom the whole time,” said Thornton, who celebrated his 30th birthday on Sept. 28. “I knew we could’ve made up some time around the top early, but then I was like, Do you take a chance of hitting the wall and knocking the spoiler off, kind of kill your aero?

“I was able on restarts to not over-drive turn one and slide off the bottom. Really, I just kind of followed (Gregg) Satterlee. I think every restart me and him probably passed one or two cars (until Thornton finally got ahead of Satterlee for fourth on lap 52). That kind of helped.

“Once we finally got spread out I was good enough where I could get under a guy and then get next to ‘em down the straightaway,” he added. “Then I could race ‘em into the corner where it wouldn’t just allow them to get right back down on the bottom.”

Thornton was actually surprised that his performance picked up as the race progressed.

“We had a really good car early, so I was kind of worried we weren’t gonna be very good at the end, that I was gonna be too tight,” Thornton said. “But I think as everybody else’s tires kind of went away, we never really slowed down. I think that helped us a ton. We went hard on tires (using Hoosier LM-40 compound rubber) and really there wasn’t any of us who did it.

“We were here in 2018 (a seventh-place in what was his only previous Pittsburgher 100 start) it was kind of the same deal — it kind of rubbered, so we knew a little bit of what to do there tonight.”

Thornton made his final pass on lap 76, slipping past Hudson O’Neal of Martinsville, Ind. — Thornton’s predecessor in the seat of the SSI Motorsports machine — for third place.

“It’s weird, because you run hard to get by a guy, and then you’re like, how much did you abuse to get by the guy?” Thornton said. “I was behind Hudson, I was running hard, trying to get under him a few times, and then finally I was like, ‘OK, I’m just gonna slow down and maybe I’ll get an opportunity.’

“Really, he didn’t even really screw up. He slowed down a little bit more on entry I think with the lapped car, so he moved out like half a car length off of (turn) two. Finally, that was my shot, and I was able to get a good run and get by him.”

The move positioned Thornton to assume command on lap 82 when Moran, and moments later McCreadie, gave up the lead due to flat tires. He never looked back as he raced unchallenged the remainder of the distance.

After O’Neal retired from the 100 on lap 84 due to apparent engine trouble while running second, Thornton almost effortlessly powered away to a full straightaway advantage over his closest pursuer within a lap of the race’s final four restarts. He couldn’t slow himself down — nor did he need to as he ran to the finish confident in the durability of his right-rear tire.

“My crew guy was like, ‘Slow the hell down!’” Thornton said with a laugh. “I was like, ‘Well, do you want me to just like not get on the gas at all?’

“I knew we had plenty of right-rear tire. The only thing I was worried more about was the right-front (tire); because I was trying to stay so straight to save the right-rear, I was like, ‘I know I’m annihilating the right-front.’

“I think part of what helped was my signal guy was telling me on the restarts every time, ‘All right, you’re out two or three car lengths. You don’t have to push it getting into turn one on the start,’” he added. “You could calm yourself back down at that point.”

Richards ended the race with the same LM-40-compound tire on his car’s right-rear corner as Thornton — he bolted the harder rubber on when he pitted on lap 40 — but he opted not to force the issue to mount a last-ditch bid for his third career Pittsburgher 100 victory.

“Ricky really got out there (on the restarts), but I really wasn’t trying to push the envelope because I knew tire wear was a big thing,” said Richards, who won the Pittsburgher in 2007 and ’16. “I was really just trying to keep the pace slow and ride it out there at the end. I knew (Shane) Clanton was behind us (in third place) and I knew he was on a soft tire so he had the rest of the train held up, which allowed us to ride it out.

“I could’ve ran right with (Thornton) if I really wanted to, but I just knew there was no need because I wasn’t gonna pass him. I had the pace so slowed down I was really just trying to finish at that point.

“(Thornton) did a great job,” he added. “They’ve been really good here lately, and I feel like we’ve been really good. The car was phenomenal all night long and was really trying to ride and be there at the end, but the way that it played out we just got what we could.”

The 48-year-old Pearson took advantage of Clanton’s bald-and-deflating right-rear tire during the green-white-checkered finish to snatch the final podium position. It was his third straight top-five finish on the Lucas Oil Series.

“I knew that Clanton was in trouble, so I was like, ‘I’m gonna see what happens here,’” said Pearson, who started 16th but also pitted on lap 40 to make a tire change. “He must have have a 13-and-a-quarter (1325 compound tire) on just and was just trying to save it. He was just getting slower and slower, and on that restart I just said, ‘Hell with it. We can go for it and see what takes place.’

“I just took chance and it worked out for us. Once we come in and changed tires and went back out there it was just pretty much single-file. I know a couple guys had flat tires here and there, but still, I never dreamed of getting all the way back to third.”

Eight caution flags slowed the race, including one on lap 40 that officials threw so the race could be stopped for teams to refuel on the homestretch. Kyle Bronson spun on the ensuing restart to immediately bring out another yellow flag. Addition cautions came on laps 42 (fourth-place Kyle Strickler slowed with engine trouble), 82 (Moran), 84 (O’Neal), 88 (Satterlee), 90 (Tyler Erb’s flat tire while running in the top 10) and 98 (Jimmy Owens’s flat while holding fourth place).

Notes: Thornton became the 20th different winner on the Lucas Oil Series in 2020. The record for most different victors in a season is 22. … Pearson finished among the top five in the Pittsburgher 100 for the fourth straight year. … Jimmy Owens’s 14th-place finish marked his first Pittsburgher 100 result outside the top five in his six career feature starts. It was good enough, however, to all but officially clinch his fourth career Lucas Oil Series championship; with a 475-point lead over Tim McCreadie, he can not be overtaken in the standings as long as he earns the 75-point feature minimum in the three remaining events. … Clanton’s flat tire on the final restart caused him to fall from third to an eighth-place finish. … Colton Flinner, who used a provisional to start 24th, climbed all the way to fourth place on lap 51 before beginning to fade and then retiring 13 circuits later because his car’s battery shorted out. … Chris Ferguson also reached as high as fourth but relinquished the spot after the lap-40 refueling stop to change a right-rear tire that his crew felt would not make the distance. He rallied to finish seventh. … The race took 71 minutes and 39 seconds to complete.