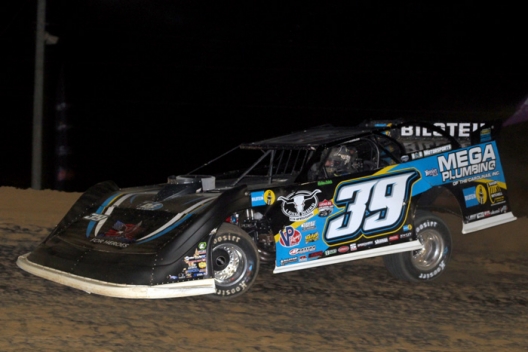 The Watertown, N.Y., driver was looking for his second straight Lucas Oil Late Model Dirt Series victory and seventh series win of the season, but he knew three-time tour champion and fellow Longhorn Chassis driver Jonathan Davenport was lurking in the second spot.

“I started seeing people taking pictures, so I figured, man, somebody’s gotta be coming if everybody’s snapping pictures all the way around the track,” McCreadie said. “So I just figured I’d do the best I can.”

McCreadie’s best was continuing his steady line around the quarter-mile oval at the southern Indiana fairgrounds track as he led the final 86 laps for a $15,000 payday, his second victory in a race he first won in 2008. He celebrated with two rounds of donuts on his way to victory lane, where he danced a little jig atop his victorious No. 39 in front of the Brownstown throng.

“It’s crazy, I was telling Josh Richards earlier tonight, when I first came here, the first time out of the gate, and I thought, ’Man, I love this place. This oughta be a lot of fun winning,’ ” McCreadie told series announcer James Essex in victory lane. “And what did you say, 15 years? Ten years? Twelve years later, it hasn’t been much fun for 11 of them, but 12’s pretty cool, that’s for sure.”

Davenport, the Blairsville, Ga., driver who started outside the front row and led the first 14 laps, drew within a half-second of McCreadie with 10 laps remaining, but McCreadie edged away for a 2.455-second margin at the checkers. Tanner English of Benton, Ky., improved eight positions in finishing third while Zack Dohm of Cross Lanes, W.Va., who held the second spot for more than 20 laps, was fourth. Four-time series champion Earl Pearson Jr. of Jacksonville, Fla., finished fifth after starting 12th.

Davenport got the jump on polesitter Kyle Strickler of Mooresville, N.C., to take the early lead, but as the frontrunners entered slower traffic for the first time, McCreadie found a higher line that was working better than Davenport’s lower groove.

“I just was probably one lap too late in moving up there when I was leading and ready to lap cars,” Davenport said. “As soon as I thought about moving up, I seen (McCreadie’s) nose and I knew he was going to get the lead there. I searched everywhere after that, and me and Zack had a good race side-by-side.”

McCreadie never faced a serious challenge after taking command, but it was anything but easy, he said.

“Tonight, for me personally, (the track surface) had a little brown strip that was out there, and it just held on the right track and kept my momentum up,” he said. “I’m telling you, I’m wore out. This is probably the hardest I’ve worked for anything. I know it’s a little track and you’re riding around at 7,800 (RPMs) all the way around this place. I don’t know.

“I saw 49 on the board and I figured, ’Don’t hold off one lap.’ Because he’ll make me pay. I thought he was getting close at the end and I just kind of moved down because it was cleaner (on the track surface).”

McCreadie had a few tense moments exiting turn two at the wall-less track where slipping over the berm can spell disaster.

The winner’s favored groove was “a little brown streak” around and track, “and it’s just got a little, just a little adhesive, that would (traction) my car up. I’d circle around on it. Any time I’d tried to diamond off it — early I could — but later I just lost a little bit of traction.”

Davenport, who won a back-and-forth mid-race battle with Dohm to regain the second spot, simply couldn’t find a way to keep up with McCreadie. He was closest at lap 90 but the winner drew back away over the final 10 laps.

English broke into the top five on the 73rd lap and picked off two more drivers the rest of the way for one of his strongest runs of the season at one of his favorite racetracks.

“It seemed like every time we had a caution we’d pass two or three cars and kind of even out,” English said. “At the end everybody started fading a little bit, and I started gaining on ’em and began picking ’em off. I had one of the best cars I’ve had all year and I can’t thank everybody enough.”

The most significant caution appeared on the 30th lap when sixth-place finisher Mike Marlar and Friday feature winner Josh Richards tangled on the backstretch battling for fifth. Marlar, who was recovering after nearly slipping off the track, made contact with Richards who spun into turn three and fell from contention.

Besides the Marlar-Richards tangle, four other yellow flags appeared, three over an eight-lap stretch early in the second half of the 100-lapper.

McCreadie, whose 2008 victory at Brownstown came in his first trip to the track, relished his most recent Indiana visit for his car owners.

“It’s a dream season for us right now,” McCreadie said, “especially with Donald and Gena pushing us along.”

Notes: McCreadie notched his 22nd career Lucas Oil victory. … Friday's runner-up Ricky Thornton Jr. broke a steering rack in the first half of the race and soldiered to a 10th-place finish. ... Sixteen drivers finished on the lead lap. … Billy Moyer of Batesville, Ark., a three-time Jackson 100 winner, was inducted into Brownstown’s Hall of Fame during pre-race ceremonies. He was an early retiree in the main event. … Mike Marlar, who scratched early from Friday’s action, was back on the track after Jack Cornett of Somerset, Ky.’s Cornett Racing Engines came up to provide a new powerplant for Marlar’s Ronnie Delk-owned No. 157. … Don O’Neal spun in his heat race and suffered significant damage when he collected Tegan Evans. … Brayton Laster was competing after taking his SAT, the college entrance exam, earlier in the day.