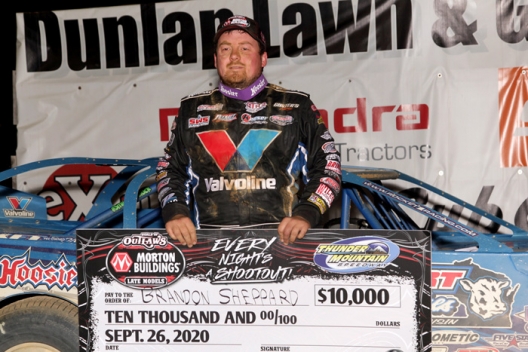 But after a last-lap caution set up a two-lap shootout to the finish — with WoO points leader Brandon Sheppard on Miley’s tail — Miley’s mastery of restarts faltered.

The 34-year-old Pittsburgh, Pa., driver got too high exiting turn two on the final restart, allowing Sheppard to slip by. Miley fought back with a last-ditch slide job heading to the white flag, but Sheppard answered with his own slider in turn one and beat Miley back to the flagstand for his series-leading 14th victory of the season.

To score a dramatic victory "in front of a packed house like this means a lot, for sure,” the WoO points leader said in victory lane while Miley was on the receiving end of loud cheers from the crowd.

“It was definitely a close finish. At least the fans saw a good race,” Miley said. “It sucks to come out on this end of it, but at least they got to see a good race.”

Sheppard, of New Berlin, Ill., took the checkers 0.302 seconds ahead of Miley, who had grabbed the lead from Darrell Lanigan of Union, Ky. on the 24th circuit and dominated the second half of the 51-lapper extended one lap because of the last-lap yellow. Ashton Winger of Hampton, Ga., rallied from his 19th starting spot for third while 18th-starting Michael Norris of Sarver, Pa., was fourth. Dennis Erb Jr. of Carpentersville, Ill., advanced seven spots to finish fifth while Lanigan, who led the first 23 laps but slipped from second to fourth on the 42nd lap before fading further, was seventh.

Friday winner Scott Bloomquist's hopes for a weekend sweep ended quickly when he spun in turn three on the second lap while battling a hanging throttle. He was towed back to the pits.

Miley was less than a half-lap from victory on lap 49 when Gregg Satterlee’s car flamed up in turn four, the last of 10 cautions. That forced a final restart with a series-required two laps to complete the race, but Sheppard figured he’d be settling for second.

“Jared definitely, he had that race won there,” Sheppard said. “He went down there in (turns) one and two there after that caution and got over the berm there coming out of two. That let me get past him, then he slid all the way in across my nose over there, and then I did the same thing to him over here. And man, it was a tough race and a lot of fun.”

The victory ended up being more work than it should’ve, Sheppard said.

“I wished we could’ve got up through there a little bit earlier. We had a really good car at the very beginning of the race, then the middle stages I felt like we weren’t as good, and there at the end we were starting to come back to it a little bit,” the Rocket Chassis house car driver said. “It’s a dream to drive this thing and it was a lot of fun tonight. This racetrack, I didn’t hear very many good things about it, but it produced some hellacious racing this weekend, so hopefully we’ll get to come  back again next year.”

Miley, who fell shy of his first WoO victory with a late-race snafu for the second time in his career, kept a stiff upper lip in his postrace interview with WoO announcer Rick Eshelman.

“We felt like we had a pretty good car and we’d been leading after all them restarts,” Miley said. “I seen when (Sheppard) was in second for the last one it was going to be the toughest, and we just got into (the turns) a little bit too high in one and two and got a push at the end of the corner. We tried to get back by, but we weren’t going to try to take him out or anything. It was a good race and he did what he needed to do.

“We let one get away from us at Eriez (Speedway in Hammett, Pa.) a couple of years ago on the last lap, too (with Sheppard winning after Miley tangled with a slower car). It sucks, but whenever we get the first one, it’ll be awesome.”

Besides the lap-two caution for Bloomquist and Satterlee’s last-lap yellow, eight other yellow flags waved. Satterlee spun in turn three on the seventh lap and Mason Zeigler slowed on the 15th lap when he lost oil pressure. On the lap-15 restart, Satterlee spun and collected Charles Powell Jr., and Gale Huey, among others.

A lap-22 caution appeared for a slowing Jason Covert with apparent ignition issues (Gale Huey spun in an unrelated incident), a lap-24 caution came out for David Scott’s left-rear flat tire, and a lap-31 yellow for a spinning Denny Fenton.

Another caution appeared on the lap-31 restart when Boom Briggs went around in turn four and collected Wyatt Scott and debris in turn one drew a lap-35 yellow as Briggs retired with suspension problems.

Notes: Sheppard snapped a dry spell of four WoO races without a victory, his second longest winless span of the season. … Miley’s near-miss at Eriez came in 2017. … At Thunder Mountain, Miley’s car required a push start multiple times during the night, including prior to the final restart. … Chub Frank was in the starting grid for the main event, but his car was pushed pitside before pace laps began and wasn’t able to take the initial green. … Besides his trouble in the main event, Scott Bloomquist had issues in preliminaries, too. He was leading the third heat when a flat right rear forced him to the pits. Bloomquist returned but electrical problems forced him to retire with a last-lap place finish. … Fourth-place finisher Michael Norris was among new entrants after missing Friday’s action to attend a wedding. … In prelims, Sheppard became the seventh driver with 100 WoO heat race victories.