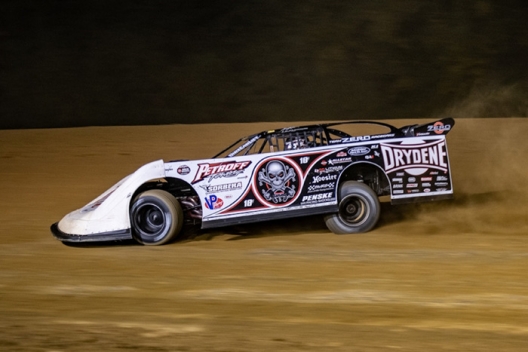 The Hall of Fame driver from Mooresburg, Tenn., who hadn’t led a lap in any feature race in 2020, led all 50 laps in the national tour’s debut at the half-mile track for his first victory since winter hip replacement surgery, earning $10,000.

While Bloomquist was slow climbing out of the car and gingerly walked over to Eshelman for his victory lane interview, he was fast on the track, building comfortable leads en route to collecting his 33rd career WoO victory and first since 2018.

For a driver with more than 600 victories, countless titles and accolades, Bloomquist was glad to be back in victory lane in the opener of a two-race weekend at Thunder Mountain. “It’s been too long,” he told Eshelman.

Bloomquist’s victory was his first with new major sponsor Drydene Performance Products, who he thanked along with his other sponsors and supporters for sticking with the 56-year-old during one of his most trying seasons.

“Everybody that helped us it’s been great,” Bloomquist said after winning his debut at the track. “No weak links. We’re going to be back.”

The outside front-row starting Bloomquist kept challengers at bay throughout, winning by 0.517 of a second over WoO points leader Brandon Sheppard of New Berlin, Ill., who started sixth. Darrell Lanigan of Union, Ky., who held the second spot from lap 20-47, settled for third.

David Scott of Garland, Pa., scheduled to start 15th but forced to the tail when he was late to the lineup grid, made a stirring rally to fourth and 22nd-starting Max Blair of Centerville, Pa., rounded out the top five finishers.

Two of the race’s top contenders weren’t around at the finish. Heat winners Mason Zeigler of Chalk Hill, Pa., and Chase Junghans of Manhattan, Kan., tangled in turn four following a lap-16 restart, with Zeigler surviving while Junghans suffered serious front-end damage as the collision triggered a multicar pileup that also eliminated Gregg Satterlee. The two came together battling for second behind Bloomquist, and Zeigler began to fade thereafter before retiring on lap 33.

Bloomquist’s victory was his first since Nov. 30, 2019, in a non-series race at Cochran (Ga.) Motor Speedway that came at the end of a season that saw the superstar miss nearly four months of action after suffering serious hip, knee and ankle injuries in a March motorcycle accident.

While he recovered enough to return to racing, his mobility remained limited and he elected to undergo January hip replacement surgery between WoO’s January action at Vado (N.M.) Speedway Park and February’s action at Volusia Speedway Park in Barberville, Fla. He’s struggled to return to full health and entered action at Thunder Mountain eighth in series points.

“I had that hip surgery, or hip replacement, and it’s been a lot more difficult than I thought,” Bloomquist said. “We thought we could get right back in it, and not being able to feel your foot and your leg makes it pretty hard — sometimes I’d slip off the gas pedal and didn’t know it until the engine about quit on me.

“We’ve got all the feeling back in my leg and 60 percent back in my foot, so I can feel the throttle and I can work it again. It’ll do nothing but get better from here.”

Sheppard finally secured the second spot late in the race, but he didn’t have enough time to seriously challenge Bloomquist on a track he described as “tricky.”

“I kept getting put on the bottom on the restarts and that was killing me,” Sheppard said. “And being in the second row on them restarts was killing me on the top, too, so I couldn’t really get where I needed to be. Finally I was able to, there at the end, I just got mad at it and got up on the wheel.

Lanigan gave a lengthy chase of Bloomquist before giving up the second spot to Sheppard late in the race.

The feature was slowed by seven cautions, the most serious for the Zeigler-Junghans tangle which caused the turn-four pileup.

Another pileup came on the 33rd lap when track champion Matt Lux and Cade Dillard made contact, resulting in a scramble exiting turn four that included Damian Bidwell and Greg Oakes, who retired with radiator damage.

The other cautions: Track provisional starter Gale Huey, winner of the previous two weekly features, spun on the frontstretch on the first lap, and Alex Ferree slowed for a lap-nine yellow. A lap-16 caution appeared when Jason Covert went over the banking in turns three and four and Brent Larson drew a lap-21 yellow with a broken driveshaft. Cade Dillard had lap-36 flat tire for the final yellow.

World of Outlaws competitors complete the weekend Saturday night with another $10,000-to-win event at Thunder Mountain with a 50-lap feature.

Notes: Bloomquist’s previous WoO victory came Nov. 3, 2018, at the Dirt Track at Charlotte in Concord, N.C. … His last WoO victory in Pennsylvania came in 2016 at Sarver’s Lernerville Speedway. … Bloomquist always notes victories at first-time tracks. “This’ll up my win percentage for my first trip to a racetrack,” he said. “We were in the 70 percent (range), somewhere in there, we’ll have to figure that out.” … Dennis Erb Jr. of Carpentersville, Ill., finished sixth in a backup car; a broken ring-and-pinion during time trials began the start of a long night that he salvaged from his 17th starting spot. … The mid-race interview with Chase Junghans should’ve come with a parental guidance warning as he used salty language to say he believed Zeigler ran into him on purpose. Zeigler didn’t dispute the accusation, saying it was payback to Junghans. “I went on down there and doored him,” Zeigler said, adding he “was just giving him a little taste of what he’d given me two restarts in a row.” … Zeigler did apologize for other drivers caught up in the mess. … Junghans was ineligible to continue because he climbed from his car, but he took a few more laps before being black-flagged and sent off the track. … Dave Blazavich of Marion Center, Pa., entered but scratched before time trials because of engine problems. … Joe Martin won the night’s Semi-Late Model feature.