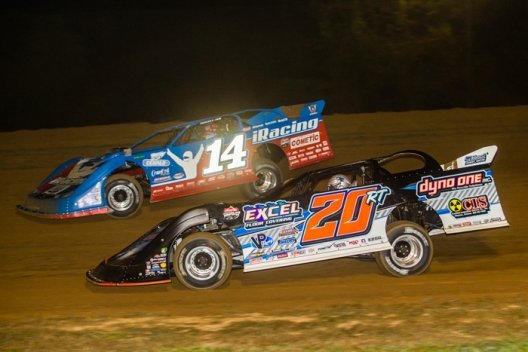 BROWNSTOWN, Ind. — After six lead changes in the first 14 laps, Josh Richards of Shinnston, W.Va., was determined to put an end to the lead-swapping when he got out front Friday at Brownstown Speedway.

Indeed the Clint Bowyer Racing driver pulled out to a comfortable lead midway through the 40-lap Night Before the Jackson, navigating Lucas Oil Late Model Dirt Series traffic with ease.

But Ricky Thornton Jr. had other ideas — and hoped to see one more lead change.

Rallying back into contention in the final laps, Thornton first tried the outside against Richards, then the inside, once pulling within a tenth of a second at the flagstand before Richards quelled Thornton’s late-race bid to steal the $10,000 winner’s purse.

The 32-year-old Richards was a little surprised — but nonetheless pleased — to grab a victory at the track where he’s had a single top-five finish as a regular on the Lucas Oil Series.

“We weren't expecting this tonight,” the seventh-starting Richards said in victory lane, “but we’ll certainly take it.”

The fifth-starting Thornton, who led six laps early, finished 0.978 seconds behind at the checkers as the top two driver were more than four seconds ahead of the rest of the field. Earl Pearson Jr. of Jacksonville, Fla., was third followed by 13th-starting Jonathan Davenport of Blairsville, Ga., and Zack Dohm of Cross Plains, W.Va.

Series points leader Jimmy Owens of Newport, Tenn., doomed early by a flat tire while leading his heat race, took a provisional starting spot to start 25th and ended up 14th on the first of two nights of national tour racing at the southern Indiana quarter-mile oval.

Most of the same drivers will gather Saturday at Brownstown for the 41st annual Jackson 100 with $15,000 going to the winner of the Lucas Oil weekend finale.

Following the race’s lone caution — Steve Casebolt spun in turn tour — Moran went back ahead to lead laps five and six before Thornton went by on the low side. Moran edged back ahead on lap eight, but Thornton’s low groove put him back out front on lap nine, a spot he held until Richards went around him on lap 14.

For the next 20 or so laps, Richards pulled away, making daring moves like his mid-race split of the slower cars of Tyler Bruening and Shelby Miles as he kept a cushion of lapped cars between himself and Thornton.

“I know coming here in the past we didn’t really have a good package, and I never really ran great over here, but we worked on the car the last couple of weeks and I have the best team in the business,” Richards said, thanking his crew and supporters. “I didn’t know what to expect. We worked on the car a little bit. They worked on the track.

“Sometimes when you’re leading you’re a sitting duck, and I’d look up and see (a crew member) a couple of times and he’d show me the gap. I just focused on my line, and I saw (Thornton) there with two (laps) to go and I didn’t really know where to run. I just (didn’t want to) break my momentum and try to exit (the corners) the best that I can and hold him off.”

Thornton was biding his time until he realized it was going to be too late to make a race of it.

“Congrats to Josh. I had a blast out there. I tried to move around some and we’ve got a good hot rod for tomorrow,” he said, noting that he didn’t began pushing the issue until lap 27 or 28. “I thought ’If I don’t go now, I’m never going to get back to him.’ We ran him back down and to race as hard as we did and never touch once, that’s pretty awesome.”

Piloting a car for SSI Motorsports of Morgantown, Ind., Thornton is looking forward to Saturday’s 100-lapper.

“I think we’ll be pretty good,” he said. “We’ve got a really well balanced car. We didn’t really change anything all night, so hopefully we can run as good again tomorrow.”

The third-finishing Pearson is also looking ahead to the weekend’s long-distance affair.

“It was a good night for us (to finish) third. We got caught up there in traffic a little bit, but I don’t know if we could’ve done anything with the (top) two there,” he said. “Anyway we’ll work on it and try again tomorrow.”

Richards knows the Lucas Oil points chase isn’t in doubt — Owens holds an huge lead with seven races remaining — but he was glad to click off his 31st career series victory.

“We got a lot of fight left in us,” he said. “There’s not a whole lot of the season left, but we’ve got a lot of speed and I just want to thank everyone again, and we’ll keep digging.”

Notes: Brownstown enjoyed its largest Late Model car count in 11 years with 59 entries. … Jason Jameson had to start on the tail because his deck height was too high in prerace inspection. … Cory Hedgecock of Loudon, Tenn., scratched with ignition problems. … Series points leader Jimmy Owens was dominating the second heat race when a blown right-rear tire forced him to the pits for a new tire. … Devin Moran was celebrating his 26th birthday. … Wayne Chinn, making his first start in two years, saw his Rob Rouch-owned car overheat in the second heat. … The event was a replacement for a cancelled series race at Kokomo (Ind.) Speedway. … Greg Johnson, Victor Lee, Mike Marlar and Brian Wilhite all scratched before heat races. … The Bowman 50 for Crate Late Models was among races set to follow the Lucas Oil main event.