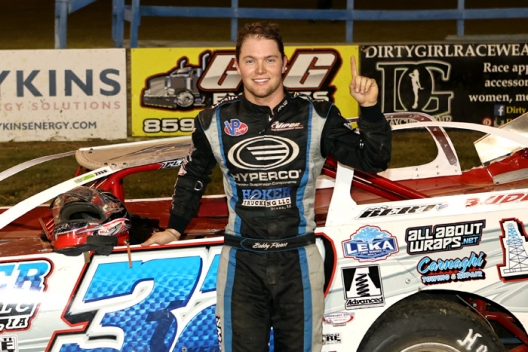 Michael Boggs
Bobby Pierce earned $5,000 for his Florence victory.
What won the race: Leading all but the first two laps and holding a comfortable margin most of the way, fourth-starting Bobby Pierce of Oakwood, Ill., outran polesitter Josh Rice of Verona, Ky., to earn a $5,000 victory Thursday at Florence Speedway, his eighth overall of 2020.
Quotable: "When I saw (Rice) get into second there, especially that last restart, I was a little nervous, because you know, like I said, he can run the top pretty good. I figured he'd be driving pretty hard to try and catch me," Pierce said. "I felt pretty comfortable and had a little bit left if I had to, but I was trying to keep the spoiler on it for the most part."
Key notes: Pierce, the 2016 North-South 100 winner at Florence, won for the fifth time in his career at the historic half-mile track where his parents met. ... He lapped all but six competitors in the 40-lapper and had a dominating lead when the lone caution appeared on lap 29. ... Fast qualifier Josh Rice, using last season's car and using an engine he usually uses in a modified, finished second. ... Second-starting Zack Dohm, who led the first two laps, ran in the top three in the first half of the 40-lapper but slipped back to finish fifth. ... Tyler Erb ran fifth most of the way but picked up two spots after the lap-29 restart. ... Darrell Lanigan of Union, Ky., fielded a Grant Garrison-owned car at the event but was disqualified because of crew misconduct.
On the move: Dustin Nobbe of Batesville, Ind., started 14th and finished eighth.
Winner's sponsors: Pierce’s Pierce Race Car is sponsored by Hoker Trucking, Allgayer Inc., Premier Waste Services, Mesilla Valley Transportation, Carnaghi Towing, Viper Risk Management, Extreme Electric, First Spear, Quality Paint & Body, Leka Tree Service, Advanced Suspension and Allstar Performance.
Points chase: Fourth-place finisher Trevor Landrum of Erlanger, Ky., leads Florence's Super Late Model points.
Current weather: Scattered Clouds, 66°F
Car count: 22
Polesitter: Josh Rice
Editor's note: Results and race details are unofficial.