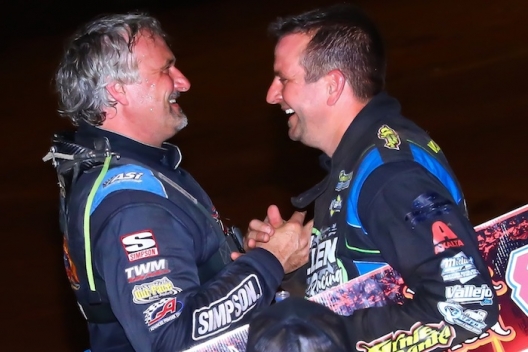 “We were able to get the (heat) win and draw the front row here tonight,” Erb said in victory lane. “Pretty much typical Clarkvsville tonight. I just kept it smooth around the bottom there and was able to keep up front.”

The sixth-starting Shirley of Chatham, Ill., the series points leader and Saturday’s $10,000 winner at Clarksville, pressured the pole-starting Erb amid traffic in the final laps and finished 0.240 seconds behind at the checkers.

Heckenast, the Frankfort, Ill., who got alongside Erb with an outside move but couldn’t complete the pass, settled for third with all-time winningest series driver Billy Moyer of Batesville, Ark., and Jason Feger of Bloomington, Ill., rounding out the top five.

Erb paced the field in the low groove throughout the race, but there were a few tense moments, including with each restart with the rest of the field double-filed behind him.

“We get into them restarts and stuff — I didn’t want to see them sure and there were way too many tonight — but we were able to keep going and that’s all that matters,” Erb said.

After an early restart, Heckenast — who battled side-by-side with Erb in a battle for second much of Saturday’s feature — got rolling on the high side and pulled alongside Erb at the flagstand on the eighth lap with the frontrunners making slight contact heading for turn one. Heckenast tried to hang with Erb, but he slipped a length back on the next lap, settling back in the low groove.

Heckenast failed to make the high groove work through several restarts and elected to try the inside groove on the race’s final restart on lap 25. Heckenast lost the second spot to Moyer, then Shirley dropped Heckenast to fourth on lap 27.

With Erb still in control up front, Shirley (low) and Heckenast (high) battled with Moyer, and entering turn three on the 31st lap, they ganged up on the second-running Moyer with Shirley going underneath and Heckenast going around.

Shirley held the second spot the rest of the way, nosing under Erb a few times, but he was unable to extend his two-race series winning streak.

“We just kind of do what we can do, this racetrack’s pretty tough to pass right now,  without ruffling anybody’s feathers,” Shirley said, “A couple of times we could get pretty good runs on a couple of guys and I’d let up, and at then at the end there we just had to go.”

Erb was glad to make some progress with his car in an event where he didn’t have to worry with World of Outlaws points.

“We’re getting this Rocket car figured out,” he said. “We made a few changes here tonight that I think is really going to help on some smaller tracks, so we look forward to keep on going here.”

The 40-lapper was slowed by six cautions, the most serious when division rookie Adam Elliott of Cunningham, Ky., stuffed his car into the turn-two fence on the 23rd lap. He wasn’t injured.

Another yellow appeared on the 26th lap when Jadon Frame and Hunter Blackwell spun between turns three and four.

Other yellows were for frontstretch debris (lap four), Larry Barber Jr. stopped in turn two (lap 12), Gavin Schmidt stopping at the top of the backstretch (lap 14),  and Richard Frost sliding into the infield (lap 17). Another restart was scrapped when Bobby Richey Jr., in Bob Gardner’s backup car, was stalled on the backstretch as the field came to green near midway.

Notes: Erb won his first feature of any kind since Oct. 25, 2019, at Quincy (Ill.) Raceway. ... Erb’s previous series victory came at Clarksville on June 26, 2017. … He also won a 2012 series race at Clarksville. … The series takes two days off before returning to action Wednesday with a makeup race at La Salle (Ill.) Speedway. Another makeup is set for Thursday at Peoria, Ill., before the series takes a lengthy break before concluding the series with two weeks of action in August.

Illinois drivers Dennis Erb Jr. and Frank Heckenast Jr. drew front-row starting spots after heat victories. Erb is a two-time series winner at Clarksville while Heckenast is looking for his first Clarksville victory. … Former track champion Larry Barber Jr. coasted his smoking car into the infield with two laps remaining in the first heat; he took a provisional for the 40-lap main. … Robert Ardry spun in the third heat. … Tim Lance, who hit the wall in hot laps, scratched from his heat race and didn’t run the consolation, but received a series provisional. … Larry Greer also scratched from the last heat. … Tangling with Adam Elliott, Joe Denby went nose-first into the wall at the top of the frontstretch at the ouset of the consolation race. He was in line for a track provisional, but when the team discovered the frame of his Capital Race Car was bent, he gave up the spot to Levi Ashby.