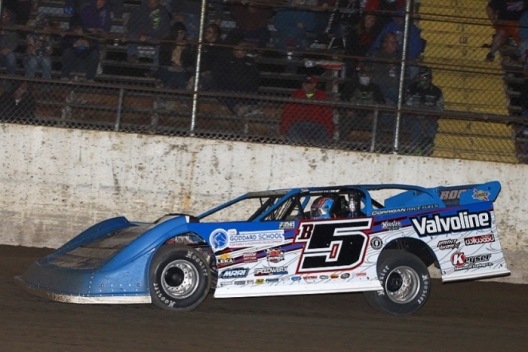 Finally finding a way past race-long pacesetter Chris Simpson of Oxford, Iowa, Sheppard grabbed the lead on the 46th circuit and marched off to capture the Rip-It 50 that closed the abbreviated 10-race 2020 MARS Racing Series schedule.

Sheppard, 27, pocketed $10,000 as he claimed the last two events of the MARS tour’s tripleheader weekend on his home Land of Lincoln turf, backing up his $15,000 score in the previous night’s FALS Frenzy at Fairbury (Ill.) Speedway. His only blemish driving his family-owned XR1 Rocket No. B5 was a runner-up finish to Brian Shirley of Chatham, Ill., in Friday’s stop at Peoria (Ill.) Speedway.

What’s more, the triumph was Sheppard’s ninth in 15 starts this season with his grandfather Steve Sheppard Sr.’s machine and his 30th overall checkered flag of his latest spectacular campaign. He will return to the seat of his familiar ride — the iconic Rocket Chassis house car — to chase a $100,000 first-place check in the Oct. 16-17 Dirt Track World Championship at Portsmouth (Ohio) Raceway Park.

“We’re having a lot of fun, and this is a really good momentum builder going into the Dirt Track next weekend,” said Sheppard, who won the DTWC last year for the third time in his career. “I’m really pumped up to get back in the Rocket house car and hopefully go win that thing too. I think our cars are plenty capable, and as long as the driver does the right job I think we should have a chance next week.”

Sheppard was on his game at La Salle as he beat Simpson to the finish line by 1.760 seconds. Shirley placed third — a mere 0.097 of a second behind Simpson — after earlier in the evening receiving recognition as the 2020 champion of the MARS series, which ended its points season the previous night at Fairbury.

Completing the top five was Josh Richards of Shinnston, W.Va., who started ninth in his Clint Bowyer Racing machine, and 15th-starter Bobby Pierce of Oakwood, Ill.

Sheppard, who started fourth, inherited second place on lap 28 when Rusty Schlenk of McClure, Ohio, experienced race-ending trouble. The DIRTcar Racing national champion started from the pole position and ran second from the initial green flag until lap 28 when his car sustained left-front damage after he clipped the spinning lapped car driven by Rich Bell in turn four.

Once in second, however, Sheppard found dealing with Simpson to be a difficult proposition.

“I was really good on the bottom, I was really good in the middle, (but) that top just wasn’t working for me at the beginning of the race, especially following Chris,” Sheppard said. “He was doing a really good job and it would keep my entry messed up and I couldn’t really get going.”

But with the race winding down, Sheppard turned up the wick. His initial attempt to overtake Simpson with a crossover move off turn four on lap 43 was rebuffed, but after taking the five-to-go signal Sheppard executed a slider on Simpson entering turn one and assumed command.

“I showed (Simpson) my nose on the bottom a couple times and I don’t think he expected me to be running the top like that,” Sheppard said of how he drew close enough to slide Simpson for the lead.

Simpson, 36, could only hail Sheppard’s talent after racing off the outside pole to lead laps 1-45 but finish second in his MB Customs car.

“We’re one spot short, but he’s the No. 1 driver in the country for a reason,” said Simpson, who in 2018 scored the biggest win of his career at La Salle in the Thaw Brawl. “I knew he was down there and I was struggling through (turns) three and four, and I think that’s where he got the run on me.”

The 39-year-old Shirley had his Bob Cullen-owned XR1 Rocket in contention for the win, racing close behind Simpson and Sheppard late in the race. He was unable to find a lane by the pacesetters, however, and fell inches short of stealing second from Simpson at the finish line.

“We was definitely on Chris the whole time. We just needed a couple little breaks,” Shirley said. “Honestly, we’re just happy to put in a good solid night here. Last night was a little bummer not to run as good as we needed (he was ninth at Fairbury).”

Shirley also threw some hosannas at his good buddy Sheppard.

“Good job to Sheppy,” Shirley said. “There’s obviously gonna be no debate that he’s the No. 1 driver in the country this week.”

Two caution flags slowed the event. After the lap-28 delay following Bell’s spin that collected Schlenk, Kyle Strickler brought out a yellow flag on lap 32 with a flat left-rear tire.