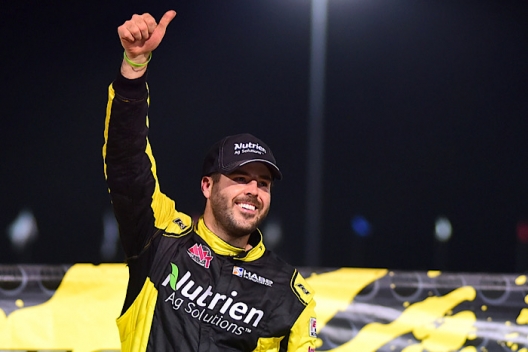 The 32-year-old Batesville, Ark., driver took home the $5,000 Lucas Oil Midwest LateModel Association prize in the 50-lap finale with his first feature victory of any kind in nearly two years. Avoiding the prospect of a second consecutive winless season, he was triumphant for the first time since Oct. 20, 2018, at Chatham (La.) Speedway.

The Lucas Oil Late Model Dirt Series regular beat runner-up Jason Papich of Arroyo Grande, Calif., who charged from 20th at the start to finish second. Jeremiah Hurst of Dubuque, Iowa, was third and took over the MLRA points lead.

“It’s nice to finally win, man. We haven’t won in a long, long time,” Moyer Jr. said. “It gets real tiring to go up-and-down the road. To finally get into victory lane, it’s nice for my guys. This is a phenomenal facility. Hopefully we put on a good show for the fans."

Moyer Jr. and Mason Oberkramer started on the front row and Moyer got the early jump, opening a two-second advantage by lap 10. But Oberkramer began to reel him in and took over the lead with a pass in turn three on lap 16 as the two sliced through lapped traffic.

The race’s first caution, on lap 18, bunched the field, and following Oberkramer and Moyer on the restart were Hurst, Chad Simpson and Garrett Alberson.

Oberkramer and Moyer Jr. again broke away from the rest over the next few laps and traded the lead three times, with Moyer working the inside to go in front on lap 24, Oberkramer using the outside groove to take it back one lap later and Moyer wrestling it away for good on lap 27.

“We had a real good Capital Race Car,” Moyer said. “(Oberkramer) ran me real clean. It was a heck of a race between us. Hopefully all the fans appreciated it.”

Moments after Moyer Jr. assumed command on lap 27, Ryan Gustin, the winner of Friday's feature, slowed on the front stretch to bring out the race’s second caution. Hurst was running third with Alberson fourth and Billy Moyer, the winner’s father, in fifth.

It was all Moyer Jr. from there, as the race remained caution-free over the final 23 laps. He pulled away and won by 5.7 seconds over Papich, who moved into second with three laps to go. Hurst wound up third with Moyer Sr. fourth and Alberson, a Roberts Motorsports teammate of Hurst, finishing fifth. Oberkramer faded over the final few laps to finish sixth.

Moyer said his spotters did a good job of showing him the glow sticks, lap after lap, to relay the margin of his lead. Realizing he had a comfortable margin made it easier to conserve his right rear tire.

“I couldn’t figure out how to get off turn four,” Moyer said. “If the sticks didn’t close up any, I kind of felt like going into the middle high and turning down and being very patient on the throttle was the trick, I guess.”

Papich was ecstatic with his charge through the field. He had to rally after being put behind at the start of the night when he had his qualifying time disallowed because he failed to make weight.

“Obviously the racetrack was racy and we have a good piece here,” Papich said. “We qualified fourth overall and were light on the scale, didn’t have enough fuel in it. We made a mistake. That’s racing. We made up for it I guess.”

Hurst’s third-place finish was enough to vault him into the Lucas Oil MLRA points lead. Also the Sunoco Rookie of the Year leader, Hurst is eight points in front of Payton Looney for the series crown.

Looney started 11th and wound up 12th. Chad Simpson finished one position behind Looney and is 30 points behind Hurst in the championship battle.

“We’re clicking along here pretty good,” Hurst said. “I just hope the rest of the season finishes out the way it’s going. I can’t thank all my guys. They bust their butt. I can’t ask for a better crew.”