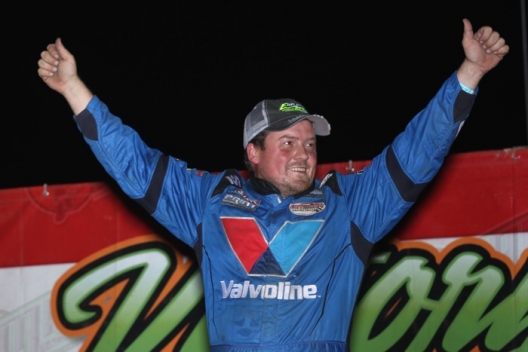 The 27-year-old superstar from New Berlin, Ill., might now capture races all over the country driving the iconic Rocket Chassis house car, but nights like Saturday — when he hopped behind the wheel of his family-owned machine and was victorious in his backyard in the MARS Dirt Racing Series-sanctioned FALS Frenzy at Fairbury Speedway — still bring him extra satisfaction.

“It’s always special to win in this B5,” Sheppard said of the XR1 Rocket mount fielded by his grandfather Steve Sheppard Sr.

Returning to his family operation with the World of Outlaws Morton Buildings Late Model Series idle for the weekend, Sheppard was as dominant as a racer can be at the ultra-competitive Fairbury bullring. He swept off the outside pole to grab the lead from front-row mate Jimmy Mars of Menomonie, Wis., at the initial green flag and never looked back, leading the entire 50-lap distance to earn the $15,000 FALS Frenzy top prize for the second consecutive year.

It was also the second $15,000 triumph at Fairbury in a month for Sheppard, who claimed an identical payday in Sept. 15’s DIRTcar-sanctioned One for the Road. Though he won that race in the Rocket house car, he beat the same driver to the finish line on Saturday: Josh Richards of Shinnston, W.Va., Sheppard’s immediate predecessor as the chauffeur for the Rocket team.

Richards, 32, chased Sheppard for the final 43 circuits of Saturday’s A-main and managed to challenge him several times, but the Lucas Oil Late Model Dirt Series regular who pilots Clint Bowyer’s XR1 Rocket car couldn’t sustain the pressure and finished 1.669 seconds behind the victor in the runner-up spot.

Shannon Babb of Moweaqua, Ill., placed third, charging through the field from the 20th starting spot in his Bloomquist Race Car. Kyle Strickler of Mooresville, N.C., finished fourth in his Longhorn Race Car after ceding the final podium position to Babb on lap 43 while Mars settled for a fifth-place finish in his self-designed MB Customs vehicle.

Sheppard flexed his muscle throughout the event, keeping his car perched high on the quarter-mile oval — though not so high that he risked damaging his ride on the ample cushion — to fend off Richards’s dogged pursuit. He didn’t falter when Richards peaked to his inside on several occasions and actually built an almost comfortable edge over the final circuits.

The victory — Sheppard’s eighth in 14 starts with his family’s car this season and 29th overall — left him relishing the opportunity to compete on home turf and excite his relatives and friends in person. He spoke more about all the people close to him who were at Fairbury than he did about the race itself.

“My Uncle Ed and Chuck, my dad and my grandpa and myself, and Storm and Blake,” Sheppard began in an interview with DirtonDirt.com’s Derek Kessinger. “My whole family really — my fiancee Mikala, my kids here Jace and Addison, Wendy, Blake, Kaley and everybody that helped back at the T-shirt trailer tonight.”

Sheppard just kept reeling off names of people important to him, demonstrating the significance of his outing on home turf.

And B-Shepp made it abundantly clear that the success he’s enjoyed with his No. B5 this year has pleased him greatly. He’s experienced virtually no drop-off from his performance in the Rocket house car.

“This thing’s been really fast all year long,” Sheppard said of his family mount. “I’ve just kind of not steered away from what I know and what (Rocket Chassis co-owner) Mark (Richards) has taught me. We’re just really consistent with this thing, and it helps to put a full night together. Luckily Mark fixed my spring smasher there earlier in the year and that definitely turned my program around. I’m qualifying like I need to be now.

“And we switched to Ford Pro Power engines,” he added of his grandfather’s effort. “The engine switch has been really great. I have to thank my grandpa for that. He’s a big Chevy guy and he bit the bullet and got me some Ford motors. It’s really shown for our program this year.”

Richards had to accept finishing second behind Sheppard at Fairbury once again.

“We had a great car,” said Richards, who started third. “The track was a lot drier than the last time we were here (last month) and I really wasn’t sure what quite to do. I haven’t raced here like this if four years I guess.

“Sheppy did a great job. I’d nose him a little bit, but he’d just get the momentum rolling that top pretty well. I feel like if he’d started fifth or sixth and we started up front I’m pretty confident we could have won, but Brandon did a great job and we just came up a little short.”

The 46-year-old Babb was the race’s hard charger, battling his way to a third-place finish. He wasn’t able to draw close enough to threaten Richards, however, after passing Strickler for third place with seven laps remaining.

“We had a pretty good run there,” Babb said. “We didn’t do too good there early in the night and started 20th, but I had a helluva race car. I was able to go really anywhere — top, bottom — but that bottom was really good so I was able to pick most of my cars off on the bottom.

“It definitely is a long-race race car, and it’s an enjoyment to drive,” he added of his Bloomquist machine. “We still need to work on our mud (wet-track) setup a little bit.”

Three caution flags slowed the race. The first came on lap seven when Jason Feger slowed due to a broken lift bar. Subsequent yellows were displayed on lap 31 when Frank Heckenast Jr. spun in turn two — just a bit ahead of Sheppard — and lap 32 when Jesse Stovall slapped the turn-two wall.

Notes: Sheppard recorded his second career MARS win; his previous came on Sept. 23, 2017, at Salina (Okla.) Highbanks Speedway. … Sheppard’s victory also had him looking ahead one week. “It’s a lot sweeter, too, winning the week before we go to the Dirt Track World Championship (at Ohio’s Portsmouth Raceway Park),” he said. “Last year we got to win this race and then we got to go there and win that, so hopefully we can do that again. That would really put a good end to the year.” … Richards remarked afterward that his car owner Clint Bowyer’s decision to retire as a full-time NASCAR driver to accept a commentator position with Fox Sports in 2021 shouldn’t affect his Dirt Late Model program. “Hopefully he’ll be able to come to the races a little more,” Richards said of Bowyer, “and I’m sure it’ll be fun to see him in the booth.” … Richards was the lone Lucas Oil Series regular to take advantage of the national tour’s Hurricane Delta-induced cancellations of weekend events at Georgia’s Dixie and Rome speedways to enter the FALS Frenzy. … Myles Moos was the overall fastest qualifier, won a heat and jumped from the fourth starting spot to second when the feature began, but he slipped out of the top five on lap 17 and ultimately faded to a 14th-place finish. … Heckenast pitted with a left-rear flat tire after spinning on lap 31 and briefly returned to the race before retiring. His 20th-place finish cost him the MARS championship to ninth-place finisher Brian Shirley; while Sunday's show at La Salle (Ill.) Speedway was billed as the circuit's "season finale," Saturday's race was the final points event of the tour's 2020 campaign and Shirley nipped Heckenast by seven points for the title. … Donny Walden was holding the second spot late in Heat 6 when contact from Chris Simpson sent him spinning in turn four. While Walden managed to gather up his car without bringing out a caution flag, he fell to a seventh-place finish and didn’t transfer through a B-main. ... Other non-qualifiers included Gordy Gundaker, Mike Mataragas, Logan Roberson, Rusty Schlenk and Derek Chandler.