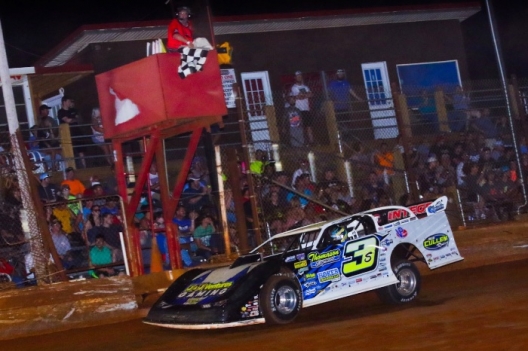 CLARKSVILLE, Tenn. — Brian Shirley is working for the weekend. The Chatham, Ill., driver and three-time series champion isn’t going to turn down any weeknight DIRTcar Summer Nationals victories, but the Friday-Saturday triumphs are all the more sweeter with the five-figure paychecks that come with them.

Following his $10,000 victory Friday at Lake Ozark Speedway in Eldon, Mo., Shirley added another $10,000 check — again in flag-to-flag fashion — Saturday at Clarksville Speedway for his third series victory of the season, all in weekend events.

“It helps really the race team, with Bob and Lisa (Cullen) funding this team, you know, obviously, with the sponsors we have, we appreciate them, but a lot of this money comes out of Bob and Lisa’s own pocket,” Shirley said, “so to help the race team just get the bank account built up is just going to help us race for the rest of the year.”

Shirley went basically unchallenged at Clarksville, pulling away on several restarts on deftly handling traffic on the tight, quarter-mile oval as he took the checkers 3.338 seconds ahead of runner-up Dennis Erb of Carpentersville, Ill.

Erb swapped the second spot with third-place finisher Frank Heckenast in the late-going as the Frankfort, Ill., rallied from 11th for a podium finish. Jason Feger of Bloomington, Ill, was fourth and Jadon Frame of Decherd, Tenn., ran second early but slipped back to fifth in his Clarksville and series debut.

Shirley, whose 29th career Summer Nationals victory moved him one ahead of Scott Bloomquist on the all-time series list, knows leading all 50 laps might look easy, but it’s anything but.

“Let me tell you, it’s never easy, I promise you,” Shirley said. “Racing is as tough as it gets, so we’ll take ’em where we can get ’em. We’re just thankful things are going our way right now.”

He was glad the restarts and traffic fell his way.

“I was definitely worried, because obviously a couple of them races already this year I’ve been bit by being out front, not knowing how the track was changing,” Shirley added. “Luckily tonight I was just able to control everything a little better. We just did the right things and we’re lucky to win the race.”

Erb, twice a series winner at Clarksville, wasn’t quite good enough to keep up with Shirley.

“My car was working good, but it needs to get a little bit better,” he said. “We’re working on it … hopefully we’ll get it dialed in here the next couple of days.”

Erb ran second most of the way. He lost that spot to Heckenast on a lap-37 restart, but regained it on a lap-42 restart.

“(Heckenast) chose the bottom there (on lap 37), which I was kind of surprised, and I got stuck on the outside,” Erb said. “Actually I think that’s where I kind of needed to be to carry some speed through there. The car kind of went away on the bottom a little bit, but we were able to have a good run there and finish second.”

Heckenast hated that he couldn’t hang on to the runner-up spot, but the duel with Erb with nip and tuck over the final 15 laps.

“You never want to pass a car and get passed back, but Dennis did a good job there,” Heckenast said. “The track was awesome … they did a good job. I was pretty hacked they had all that water on it early. It was one-lane early, but I knew that’d gives us our only option later to be able to pass.

“I just wore my stuff out pretty hard there trying to get to the front. I passed Dennis on the outside on that restart, and then I — nothing against Dennis — but putting Dennis on the outside and taking his line away was the better move, but at the same time, too, I felt like (my car) was dying on the top. So I didn’t think anything was up there. But after it all happened he kept me crutched down hard (down low) where I couldn’t move out and get a good line, so the outside or middle seemed to be better for him. So he did a good job.”

The 50-lapper was slowed by five cautions, none for serious incidents.

A lap-12 yellow appeared when seventh-running Caleb Ashby tried to get under a slower car entering turn three and slid into an infield tire barrier. Another caution flew on lap 23 when Adam Elliott stopped at the turn four-exit with right-front nosepiece damage.

Billy Moyer slowed for a lap-27 yellow and another caution appeared on lap 36 when Joe Denby’s crumpled car rolled to a stop at the turn-four exit with a flat left-rear tire. The final yellow came out on lap 41 when Dillon Tidmore stopped at the top of turn two.

Notes: Shirley is the tour’s first back-to-back winner in 2020. … The last series driver with back-to-back victories was Zack Dohm of Cross Lanes, W.Va., in the final two points races last season at Oakshade Raceway in Wauseon, Ohio. … Half the 22 starters completed 50 laps.

Brian Shirley will start on the pole after the redraw among heat winners. Starting alongside is Jason Feger with Jadon Frame in the third spot. … David Seibers was running second on the last lap of the final heat when flat right-rear tire dropped him to sixth. ... Drivers had little passing room in the heats with the high side too wet and the inside tire barriers pushed out, making for mostly one-laned racing. Dillon Tidmore tried to make the highest groove work a couple of times but got bogged down in the heavy red clay. … Promoter Williams Scogin tried to improve the high groove but allowed that only more racing will help widen it out; he planned to push in the infield tires for the main event. … With a two-day show, Scogin made sure he’d watered the track plenty before opening night to make sure the surface can last through the weekend. … Speaking of Sunday’s event, instead of a nine-division program, only the mod lites will join DIRTcar’s touring  Super Late Model and modifieds for the weekend finale. … The first two heat races ran caution-free, but four cautions slowed the third heat, including for a Tim Lance Jr.-Gavin Schmidt tangle exiting turn four. … Only five drivers on the grounds have DIRTcar Summer Nationals victories and four of them filled the first two rows of the second heat (Dennis Erb Jr., Brian Shirley, Billy Moyer and Frank Heckenast Jr.). … Jason Feger is the lone other driver at Clarksville to win on the series.

Dennis Erb Jr. of Carpentersville, Ill., was the overall fast qualifier. ... After watching the first round of Super Late Model hot laps, promoter William Scogin thought the cars were on the track too long. “Everybody wants to kill the racetrack,” Scogin said with some exasperation. “Are we running a heat race or what?” … Bobby Richey Jr. of Chattanooga, Tenn., is piloting his buddy Bob Gardner’s backup car at Clarksville. Richey bought a race car from Gardner in 2011 and they became friends, and when Richey sold out his racing equipment in 2018, Gardner “told me I could just drive for him part time instead of quitting.” The 49-year-old Richey’s claim to fame: he was the last Super Late Model winner before the closure of Cleveland (Tenn.) Speedway. … A local radio station’s “Christmas in July” playlist was piped over the PA system before racing action. Two thumbs down from this reporter. … Amid the coronarivus, Clarksville has been streaming its own racing programs at clarksvillespeedway.tv, but because DIRTVision has exclusive rights to DIRTcar Summer Nationals events, the track’s site won’t be showing the weekend doubleheader. … The nine-division program had the lengthiest schedule on the tour so far (it almost required a legal-size sheet of paper), and series director Sam Driggers often runs down the schedule at the drivers’ meeting. Not at Clarksville. “I’m not going through this schedule because there’s way too much of it,” Driggers cracked, asking drivers to make it a quick night because he was tired from the tour’s long trip from Missouri. ... Caleb Ashby of Cunningham,Tenn., was late entry and joined the field as the 22nd driver.