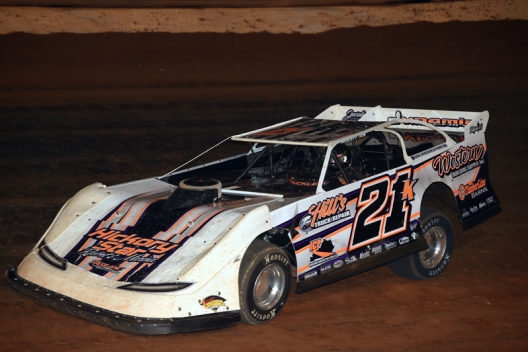 Surviving a battle of attrition — mainly flat tires amongst a number of front runners — Knuckles, of Ewing, Va., avoided danger and won Saturday’s Schaeffer’s Southern Nationals finale for a career-high $10,053 payday. Knuckles was in the right place at the right time when first, second-running Ross Bailes of Clover, S.C., pitted with a flat tire, and then, race-long leader Dale McDowell of Chickamauga, Ga., did the same.

Their departure handed the lead to Knuckles, who deftly handled things from there at his home track, picking up a popular victory in front of a jam-packed grandstand at the high-banked, high-speed arena carved into the East Tennessee hillside. Knuckles finished 1.828 seconds ahead of seventh-starting Michael Chilton of Salvisa, Ky., for his first career Southern Nationals victory. Ryan King of Seymour, Tenn., improved two positions to finish third, while Vic Hill of Mosheim, Tenn., the event’s 2011 and 2015 winner, finished fourth after starting 12th.

Brandon Overton of Evans, Ga., who pitted to change a flat tire on lap 18, rallied from his 15th starting position to complete the top five and secure the 2020 Southern Nationals Series championship, his third on the Ray Cook-promoted tour.

The race was slowed by six cautions as at least seven drivers pitted to change flat tires. Knuckles — who, like Chilton, King and Hill, made it the full 53-lap distance without pitting — wouldn’t swear to it, but thought he may have seen the culprit.

“It was down there coming off of turn four there was a little rut and I think there was a rock sticking up in that rut that had a (sharp edge) and was getting everybody’s right rears and I tried to stay above it,” Knuckles said. “I’m not for sure … don’t quote me for certain on that … but I was trying to watch the racetrack and see what was going on and see if I seen anything. I kinda seen that one little deal and I still ain’t for sure if that’s what it was, but I was just trying to stay away from it ‘cause that’s what it looked like to me.”

Knuckles, who outran Chris Madden of Gray Court, S.C., to win his heat race, fell in behind McDowell and Bailes at the start of race. He was in third when Overton slowed on lap 18 with a flat. During the same caution, Bailes ducked into the pit area to change a flat tire as well. Two laps later, Kyle Hardy of Stephens City, Va., brought out a yellow because of a flat. During that caution, McDowell, who was on a rail from the opening green, had to pit also.

“From the drop of the green, you know me and Kyle Hardy started side by side and I kinda fell back from Ross for a little bit,” said Knuckles. “But five laps in I was pulling him back in. I was pretty close to him, within a car length. I felt like we were pretty good and I was trying to figure out where to go to start working on him and then he ended up having a flat, which we caught a break there.

“I was trying to figure out where I could get McDowell at, which he had a pretty good car … he had an awesome car. But I was feeling like I was rolling around pretty good you know. I could put it anywhere I wanted it and I was just trying to hit my marks, rolling in and out of the gas smooth, keeping the car straight.

“We rolled around there seven or eight laps under that one caution (while track officials searched for debris) and I was watching Dale ride around and I started seeing his right rear bounce a little bit just riding. The more I watched it, the more it kept getting flat, so I pulled up beside him and told him. After that, when he pulled in, I said, ‘Well, it’s left up to us.’  Just do the deal and stay calm and just try run it like we normally would on a weekly race like we was here on a weekly race or something.”

Chilton was still in seventh when the first caution waved, but within two laps the second yellow was out and McDowell, Bailes and Hardy each had pitted. Chilton then began a lengthy battle with King for the runner-up spot. When Tyler Millwood of Kingston, Ga., slowed with a flat on lap 32. Chilton seized the opportunity on the restart.

“I knew I needed to get by Ryan,” Chilton said. “It was still pretty top dominant down here (in turns three and four). I felt like I was a little bit better than him. I knew that was my chance to get him there. I slid him and he crossed back under me and we got together a little bit there. The next restart he almost slid me there but he left me a lane there and I appreciate that. A lot of guys you know wouldn’t do that. It’s easy to just take a guy on to the fence and choke him off but he raced me clean.”

Chilton said after taking it easy for much of the race, he left nothing on the table as he chased Knuckles in the waning laps.

“The first half of that race I kinda rode, tried to keep my left rear in the brown there and tried to save it for the end,” Chilton said. “Them last 10 (laps) that’s all I had. If I’m gonna run second, I’d rather it be to Dakotah. Me and him’s become big buddies and I know it’s a big deal for him to win.”

King, who hasn’t always enjoyed racing at Tazewell, capped five Southern Nationals starts this season with his best finish, topping the fifth-place effort he had at I-75 Raceway in Sweetwater, Tenn., on July 14, while matching his career-best finish he had with the series on  July 28, 2016 at Crossville (Tenn.) Speedway. He qualified third in his group and finished second behind McDowell in the first heat.

“I’m starting to like this place a little bit,” said King. “We’re getting the hang of it, but we’ve been doing good everywhere. I’m really proud of the team right now. We’re picking up a lot of speed.”

With three series upstarts racing their way to podium finishes, series title contenders Overton and Madden ran into trouble. While Overton had a flat, Madden was swept up in a wreck on the frontstretch on a lap-18 restart that hampered his chance at a sixth career Southern Nationals title.

He was running eighth at the time, six positions ahead of Overton, but could only work his way back to ninth. Ironically, with the series rules stating drivers could drop their worst finish this year, all three drivers in the top three in series points entering the event — Overton, Madden and Bailes — recorded their worst finish in the finale.

When asked about Tazewell Speedway on Friday night, Dale McDowell was quick to respond. “The good part about it is you know what you got when you’re going there and the bad part about it is you don’t know what you’re gonna get throughout the night,” he said. “It’s exciting for the race fans for sure. We just hope we can be in the right spot at the right time and if that all happens, then we’ll end up at the right place.” … McDowell, looking for his second straight series win at Tazewell, was in the right place in both qualifying and his heat as he set the quick time in Group A and won his prelim to earn the pole for the 53-lap main event. … The series points race took an interesting turn in the second heat when polesitter and points leader Brandon Overton pushed up the track in turn one on the first lap and was passed by both Michael Chilton and John Baker. Outside front row starter Kyle Hardy took the lead at the start as Overton fell back to fourth where he finished. He’ll start 15th in the feature, his worst starting position in a Southern Nationals feature this season. … Ross Bailes, the overall fast qualifier, passed Jason Trammell midway through the third heat and pulled away to win by 1.288 seconds and will start on the outside front row of the feature. … Chris Madden started on the pole of the fourth heat, but fell behind Dakotah Knuckles on the first lap and finished second. Looking for his fourth career series win at Tazewell and first since 2012, Madden will start eighth in the feature. Madden, chasing his sixth Southern Nationals championship, doesn’t have quite as far to go as Overton, but as quickly as things could go wrong at Tazewell, having both title contenders starting the in middle of the field could be interesting. … Colton Burdette, Baker and Hardy are among drivers making their first start at Tazewell. “It’s different for sure,” said Parkersburg, W.Va.’s Burdette. … Jake Knowles’ series struggles continue. Knowles broke during qualifying and did not start his heat. He will likely make one lap in the feature and park. … Brian Smith didn’t start his heat. Smith plans to start the feature in a borrowed car. He will drop to the rear at the start.

Taking the track third in Group B, Ross Bailes of Clover, S.C., set the overall fast time with a mark of 11.218 seconds. It’s the sixth time in 12 events that Bailes has wheeled the Big Frog Motorsports Rocket XR1 to overall fast time honors. Chris Madden of Gray Court, S.C., was second in Group B with a time of 11.404 seconds. Bailes will start on the pole of the third heat, with Madden on the pole of the fourth heat. Dale McDowell of Chickamauga, Ga., was the fastest among the 11 drivers in Group A, stopping the clock at 11.252 seconds to earn the pole for the first heat. Brandon Overton of Evans, Ga., was second-quick in Group A at 11.303 and will start on the pole of the second heat.

The Schaeffer’s Southern Nationals Series wraps up its 16th season with Saturday’s finale at Tazewell Speedway. The high-banked, super fast oval in the East Tennessee hills has hosted the series every season since the tour’s inception. Only twice (2006-’07) has Tazewell not hosted the series finale.

Winners of four of the last five series races at Tazewell — Dale McDowell (2019), Brandon Overton (2017-’18) and Vic Hill (’15) — are expected to be in action Saturday. Overton, of Evans, Ga., leads the series to The Taz, clinging to a 12-point lead over Chris Madden of Gray Court, S.C. Each driver will be allowed to drop their worst finish, which will likely make the points race even closer.

Overton, with six wins, and Madden, with four, have dominated the tour this season. The two drivers have been neck-and-neck since from the opening race on July 10. Overton’s average finish is 1.9, while Madden’s is 2.3. Madden won his fourth race Friday at 411 Motor Speedway in Seymour, Tenn.

It rained all around Tazewell on Saturday, but at 6 p.m., the sun shown bright off of turn four and the stands were beginning to fill. With temperatures hovering in the low-80s, drivers and fans alike are in store for a comfortable finale.