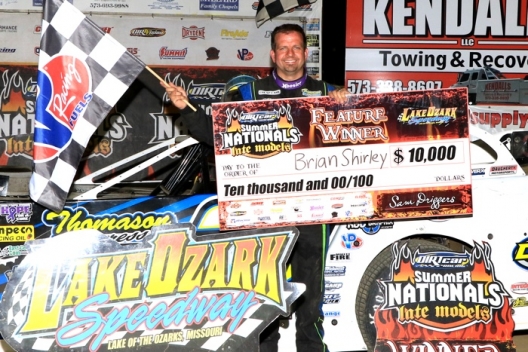 Controlling the action from start-to-finish, Brian Shirley of Chatham, Ill., led all 40 laps of the Hell Tour’s first visit to the 3/8-mile oval in 12 years. The series points leader turned back a brief challenge from Hall of Famer Billy Moyer of Batesville, Ark., and pulled away late in the distance to beat Jesse Stovall of Billings, Mo., to the finish line by 2.558 seconds — nearly a full straightaway — for a $10,000 check and his second Summer Nationals triumph of 2020.

Shirley, 39, was just 24 hours removed from losing Thursday night’s Summer Nationals feature at Springfield (Mo.) Raceway in frustrating fashion — he led the first 24 circuits of the 40-lapper only to have no answer when Frank Heckenast Jr. of Frankfort, Ill., came on strong using the extreme inside of the track — but he didn’t fear a repeat.

“Tonight was a little different,” said Shirley, who drove his Bob Cullen-owned XR1 Rocket. “I watched that race last night (on video), and Frankie never went up to the top at all. So I felt like last night I was a sitting duck because I was out there running the top and I was heating up my tire, and when it come time to get back down, I didn’t have nothing left to get back down. I needed to stay out in the middle, like tonight, and run my race.

“Last night it just worked out that the track came in on the bottom, and the circumstances for those guys (Heckenast and inside-running runner-up Mason Oberkramer of Brosley, Mo.) worked out better. It was their night to win the race.”

Friday was Shirley’s turn to shine. The 62-year-old Moyer offered him some light pressure following a lap-13 restart, but Moyer lost second to Stovall following a lap-25 caution period and Shirley dominated the remaining circuits as Stovall and Moyer diced for the runner-up position.

Stovall settled for second place in his Black Diamond Race Car after starting sixth. Moyer finished third in his Capital machine, with Heckenast starting and finishing fourth in his family-owned XR1 Rocket and eighth-starter Gordy Gundaker of St. Charles, Mo., completing the top five in his family’s Black Diamond mount.

The key moment for Shirley came as soon as the race’s initial green flag was displayed. Starting outside Moyer on the front row, he outgunned the six-time Summer Nationals champion to assume command. He took advantage of the track’s reconditioned outside line to seize a lead he would never relinquish.

Moyer certainly understood the significance of Shirley’s quick jump out of the gate.

“He kind of got me there on the start,” Moyer said. “We was close to the same speed it seemed like (after that), but at the end of the day he got the money and we didn’t.”

Shirley never actually saw Moyer again, but he figured the all-time great wouldn’t go quietly. Moyer did draw close after that lap-13 restart, but he ultimately had to spend too much time battling Stovall over the final 15 circuits to mount another bid for his 101st career Summer Nationals triumph.

“It’s weird, but when I’m racing, unless I see my signal guy, it sounds, in my ear, like somebody’s always there,” Shirley related. “And as good as (Moyer) is and as smooth as he is … and on that type of racetrack, I knew he was gonna be really, really tough, so I was just trying to focus on hitting my marks and doing the best I could.

“Once I seen my signal guy show me I had a good lead I felt a lot better.”

Shirley’s triumph was notably his second win worth $10,000 in a week, following up his first Summer Nationals score of the season on July 17 at Farmer City (Ill.) Raceway. That’s a promising development for Shirley, who registered just a single five-figure victory during his 13-win 2019 season. Before Farmer City, his last five-figure win was a $15,000 World of Outlaws Morton Buildings Late Model Series checkered flag on June 30, 2016, at Rockford (Ill.) Speedway.

“Anytime you can win is nice, but when you can win a 10 (grand event), it just gives you a little extra to keep going,” Shirley said. “That’s really what it is for us right now. We spent so much money that came out of Bob and Lisa’s own pocket to keep the team going this year that we just need to hopefully keep doing a good job so we can build up the bank account.”

Stovall restarted second behind Shirley on lap 29, but he wasn’t able to stick with the leader and never mounted a challenge. He was nevertheless smiling over his second top-five Summer Nationals finish in as many nights and the back-and-forth tussle he had with Moyer.

“I just hope it was clean,” Stovall said of his race for second with Moyer that saw the two swap the position several times. “These tight racetracks like this, when you can throw these sliders you gotta be pretty careful. I respect him with the utmost and don’t want to tear him up … I don’t want to tear anybody up on this racetrack.

“We raced each other hard … he’s really one of the ones that taught me to drive a Late Model when I first got started. He’s still to this day one helluva race car driver.”

Stovall spent most of his battle with Moyer tossing his No. 00 around the track’s uppermost reaches with daring abandon.

“Like the last four, five laps there, I just kind of let it all hang out,” Stovall said. “My quarter-panel’s junk anyways, so if I gotta get up there and tear it off a little bit to run second, that’s what I did.”

Moyer just was glad to survive the intense action with Stovall.

“The fans had to like it,” Moyer said. “I was trying to get through there with my car in one piece. We brought out a different car here tonight and it’s doing a good job. There’s parts of the track it’s good on and there’s parts we need to work on a little bit.”

Three caution flags slowed the feature. Tony Jackson Jr. of Lebanon, Mo., brought out the first caution on lap 13 when he spun between turns one and two. Jason Feger of Bloomington, Ill., paused the race on lap 25 when he stopped on the backstretch — though he would return and go on to finish 10th — while a backstretch tangle involving Dewayne Kiefer of St. Genevieve, Mo., and Kyle Beard of Trumann, Ark., on lap 29 represented the final yellow flag.

Notes: Shirley tallied his 28th career Summer Nationals victory, tying him with Scott Bloomquist of Mooresburg, Tenn., for fourth on the circuit’s alltime win list. … As Shirley pursues his third straight and fourth overall Summer Nationals title, he’s on an eight-race streak in which he has seven top-five finishes and no run worse than sixth. … Daryn Klein of Fairview Heights, Ill., used a provisional to start 20th in the Gerstner Racing Capital Race Car after he slapped the wall on the final lap of his heat but was the feature’s hard charger with an eighth-place finish. He powered around the outside of the track to climb as high as sixth on lap 35 before losing two spots in the final circuits. … Dennis Erb Jr. of Carpentersville, Ill., nipped Will Vaught of Crane, Mo., by inches to finish sixth. … Teams planning to chase the Summer Nationals for the remainder of the weekend faced an overnight haul of roughly 6-and-a-half hours and 425 miles to Clarksville (Tenn.) Speedway, which hosts the Hell Tour on Saturday ($10,000 to win) and Sunday ($5,000).

The front row for the 40-lap feature flips the order of Thursday night’s top-two starters at Springfield Raceway; this time Billy Moyer has the pole with Brian Shirley to his outside. … Moyer, who won the only previous Summer Nationals event at Lake Ozark in 2008 (as well as a World of Outlaws race at the track in ’06), is hoping for better results than at Springfield. He ran second in that feature until dropping back dramatically on a lap-nine restart, the victim of an apparent sealed-over tire. … Brothers Gordy and Trevor Gundaker are competing in their home state after skipping the Springfield program in the wake of the death of their aunt Shelly Kay, who died this week of a heart attack at age 52. Gordy that their aunt — a sister of their mother Tammy — was their biggest fan and would have wanted them to go racing. … Daryn Klein failed to qualify in the third heat after slapping the wall between turns three and four on the final lap. He had flirted with the concrete for several laps while running fourth; he received a provisional starting spot for the feature, however.