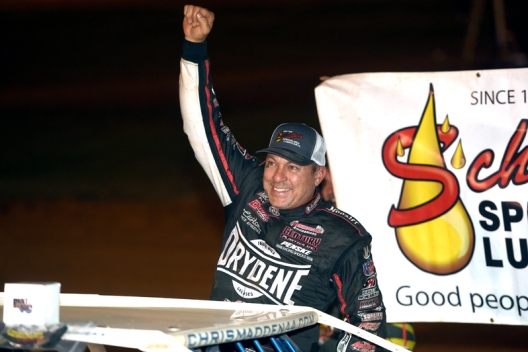 It’s no shock that Hedgecock, a rising talent from nearby Loudon, Tenn., bolted out front at the drop of the green at what he considers one of his home tracks. It’s also no surprise that Madden, a five-time Southern Nationals champion who was fourth in the World of Outlaws Morton Buildings Late Model Series standings when he parted ways with Scott Bloomquist Racing back in late June, neither abused his equipment nor got overly anxious when Hedgecock set a blistering early pace.

Madden, of Gray Court, S.C., instead remained patient enough during the first half of the main event to make sure he’d be able to drive around Hedgecock once he finally reeled him in. When the opportunity presented itself on lap 30, Madden was there to pounce.

He took the lead from Hedgecock as they completed lap 30, turned back a handful of Hedgecock’s desperate bids to reclaim the top spot and then stayed just far enough ahead of a charging Dale McDowell of Chickamauga, Ga., over the final five laps to pick up his fourth Schaeffer’s Southern Nationals Series victory of the season and first career series triumph at 411 Motor Speedway.

“We had a great race car tonight,” said Madden, who collected his series-leading 28th career Southern Nationals feature win. “You know (it was) a great racetrack here. We could run top, bottom, middle, anywhere. It was a great race with Cory there for awhile and we seen Dale coming there at the end.”

McDowell, who dropped Hedgecock to third on lap 37, finished 0.644 of a second behind Madden at the finish of the caution-free feature. Hedgecock settled for third — his fourth third-place finish of the series — while Brandon Overton of Evans Ga., slipped one spot to fourth. Sixth-starting Ross Bailes of Clover, S.C., completed the top five.

“It’s been great,” said Madden of his short union with Mike Millwood’s race team. “I’ve never driven a (Rocket) XR1 (Chassis) before so we had a lot of learning to do, but we’ve done a great job so far.”
Indeed he has. He has four wins, five runner-up finishes, a fourth and seventh in his 11 Southern National starts and closed to within 12 points of series leader Overton as they head into the minitour’s final race on Saturday.

McDowell chased his fellow veteran campaigner in vain over the final 16 circuits, cutting Madden’s 1.735-second advantage down to a scant six-tenths in the waning laps.

“We got in lapped traffic and I was just trying to go different lines you know,” said McDowell. So it is what it is. You just try to go where they’re not. (Madden) got a little bit better start there at the beginning and I think that was the difference. So it wasn’t a bad night for our E-Z-Go hot rod here. It wasn’t a bad night for us.”

It wasn’t a bad night for Hedgecock either, but the regional standout who had high hopes for scoring his second career five-figure payday, couldn’t help by be a little disappointed.

“It’s good to be disappointed with a third-place finish,” said Hedgecock. “I mean we got a really really good Super Late Model car it seems like right now and it sucks when you come to your home track expecting to win, not ego or anything, but just expecting to win, just really wanting to win.

“Early on we were obviously good enough to be out there and we led to probably the halfway point. Then we just started slipping the right rear and I couldn’t fix it,” Hedgecock added. “On that slick of a racetrack, I can’t slow down enough to fix it. This place was racey enough and wide enough, I can’t make it 20 lanes wide. I’m not gonna be that type of guy either anyway.

“I know they’re running for a points championship and we’re just racing for some money, so I know positions mean a lot more to them than it does to me, to an extent. I’m not saying by any means that I gave it to them, because I did not. I was trying my damndest to stay in front of them.”

Chris Madden of Gray Court, S.C., won the first heat from outside the front row to earn the pole starting position for the 53-lap main event. Madden, who has a series-best 27 career victories, has never won a Southern Nationals race at 411. He finished second behind Crossville, Tenn.’s Randy Weaver in 2014, his lone series start at the egg-shaped track. … Second heat winner Brandon Overton of Evans, Ga., is chasing a single season series record seventh victory. Overton has six wins on the year, tied with Madden, who won six in 2007. … The top two positions in the outside row are made of the last two Southern Nationals winners at 411. Cory Hedgecock of Loudon, Tenn., won the event in 2018, while Dale McDowell of Chickamauga, Ga., won last year. There was one big difference, however, Hedgecock’s victory paid $3,500-to-win, while McDowell’s paid $10,000-to-win. … Hedgecock, who won the $10,052 Scott Sexton Memorial here in May is seeking his second career five-figure payday. ... After a lap-16 skirmish at Crossville (Tenn.) Speedway on Thursday between Madden and Ross Bailes of Clover, S.C., left Bailes spinning, the two drivers start five positions apart in Friday's feature, with Bailes starting on row three. All eyes will be on the two if they manage to get close to each other in the 53-lapper. … Jake Knowles and John Baker will take series provisionals to start the feature. Knowles was involved in a post-race tangle with John Llewellyn and John Tweed after crossing the stripe in the consolation race that left Llewellyn’s machine heavily damaged. ... David Brannon of Elora, Tenn., is making his first Southern Nationals start of 2020.

The Schaeffer’s Southern Nationals Series scoots 85 miles east from Crossville across I-40 to Seymour, Tenn., for Friday’s 11th round of the Ray Cook-promoted tour where 411 Motor Speedway hosts the series for the seventh time. Both the last two series winners at 411 — Dale McDowell of Chickamauga, Ga., in 2019 and Cory Hedgecock of Loudon, Tenn., in 2018 — will be in action, as will the tour’s only repeat 411 winner — Donald Mcintosh of Dawsonville, Ga., who won in 2015 and again in ’17.

Brandon Overton of Evans, Ga., who won Thursday at Crossville (Tenn.) Speedway, has six series wins on the year and leads the series into 411, where he’ll try to defend his 20-point series lead against Chris Madden of Gray Court, S.C. Madden has three series wins and has been right behind Overton step-for-step during the tour’s 16th season.

After nine events without a hint of rain, the series had to dodge Mother Nature on Thursday at Crossville and may very well have to do the same thing at 411 on Friday. It’s extremely humid in East Tennessee, with the 83-degree afternoon temperature feeling more like 95 degrees. The afternoon skies are partly cloudy with rain chances expected to diminish greatly after 7 p.m.