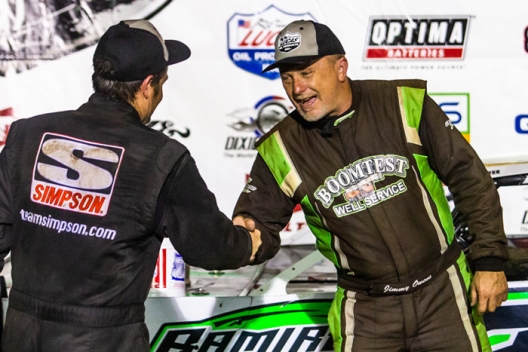 GREENWOOD, Neb. — In Thursday’s caution-free Dirt Track Bank Go 50 at I-80 Speedway, winner Jimmy Owens of Newport, Tenn., didn’t have time to catch his breath in a back-and-forth battle with Josh Richards.

And that was before Ricky Thornton Jr. turned up the wick on the fifth-starting Owens in the final laps of the Lucas Oil Late Model Dirt Series event that opened the tour’s Imperial Tile Silver Dollar Nationals weekend.

Thornton briefly edged ahead of Owens exiting turn four in the final laps, but Owens swept back ahead and managed to take the checkers 0.718 seconds ahead of Thornton to earn his seventh series victory of the season and 71st of his career.

Owens picked up $12,000 for his efforts, but in victory lane he was already thinking about Friday’s prelims and Saturday’s weekend finale that pays $53,000-to-win, the season’s richest winning purse so far in Dirt Late Model racing.

“It’s rolling pretty good. I’m looking forward to tomorrow,” Owens said. “I felt like we needed a little bit right there. We were good. We got the lead. And we won. But we need to work on it just a little bit and maybe we’ll be a lot better tomorrow.”

The third-starting Thornton, the Arizona native who races out Iowa, nearly pulled off the upset in his debut at the 4/10-mile oval in taking the runner-up spot ahead of Brandon Sheppard of New Berlin, Ill, who started alongside Owens in the third row. Ricky Weiss of Headingley, Manitoba, improved four positions to finish fourth and Richards — the Shinnston, W.Va., driver led the first four laps and again on laps 10-27 while dueling with Owens — settled for fifth after starting outside the front row.

Owens thanked his crew and his car owner, Leon Ramirez of Woodward, Okla., who got the chance to see his driver extend his Lucas Oil points lead.

“Leon and the guys were here,” Owens said. “It's great to get a win for them to be here with us.”

Ramirez got to watch an excellent Richards-Owens duel early in the race as Richards took command at the outset before Owens used the low groove to grab the lead on the fifth lap.

Owens ended up shifting to the high groove and it was Richards using the lower groove to go back ahead on the 10th lap and stay in command through the halfway point.

“Yeah, Josh has been really, really good the past few weeks, and I knew there was a lot more talent behind us, too,” Owens said. “But I was able to move around on the racetrack, and when I’d move around, I could see I wouldn’t hardly lose no time against him. Finally there he started rolling back to me a little bit and I was able to capitalize on it.”

When Owens went back out front on lap 28, he edged away to a comfortable margin before his pursuers — with a flurry of action in the top five — closed in late as the high-running Thornton twice drew within a tenth of a second of Owens at the flagstand.

Thornton lost ground when he slapped the fence exiting turn two with six laps remaining, but he rallied back to nearly slip by Owens exiting turn four in the waning laps.

“I definitely could hear him there, and he kind of got a run on me off of (turn) four there and left me plenty of room on the high side,” said Owens, the 2013 Silver Dollar Nationals winner. “I appreciate that, it’s good to race with guys like that.”

“He started kind of getting into (turn) one and kind of cutting across the middle on exit. I was just a little too tight once he got there,” Thornton said. “I probably could’ve thrown a Hail Mary slide job in (turn) three, but I didn’t want to wreck both us and take us out of the race, you know? Jimmy’s been my hero growing up, so just to get to race with him has been awesome. But we had a really good car.

“We were elbows up. There was a cushion about on the wall. I don’t know how much (cushion) was left, I think we were kind of just scraping the wall. … I could kind of move around there about halfway through the race. I’m excited for these next two days.”

Sheppard nearly got close enough to the lead duo to take a stab at the lead himself before settling for third.

“In the heat race there, everybody was hurting tires on the left rear, so I was kind of trying to save (rubber) as good as I could there in that feature,” the third-place finisher said. “There towards the end I really got going and my car felt really comfortable and maneuverable, and I passed a few cars kind of all over the racetrack there. My car is really good and balanced right now. I was hoping to shake it up a little bit there at the end, but Jimmy’s been really tough, and Ricky’s been tough too, and them guys did a really good job.”

Sheppard recognized that teams were conserved with tire wear after the night’s prelims, but he couldn’t hold back too much.

“Them guys were up there going, so I had to get up there and go, too, you know?” Sheppard said. "I think, from the way our tire looks right now, I think we managed it pretty well. Obviously we’re going to have to do it better in the big race on Saturday, but all in all, we’ll be able to survive. It’s just going to be a matter of conserving (tires) as long as we can and not running that cushion too hard there at the beginning of the big race. We’ll see what happens. It’s sure going to be interesting."

Notes: Polesitter Stormy Scott of Las Cruces, N.M., dropped out of the top five after four laps and ended up 11th. … Because of mechanical trouble, Tyler Erb, Shane Clanton and Tanner English all went to backup cars after heat races. … Clanton and English ran consolation races, but Erb had to start on the tail of the feature because he didn’t make his car change until feature time. … Besides Ricky Thornton Jr., Chris Ferguson of Mount Holly, N.C., was also making his I-80 debut. Sunday’s Lucas Oil Series winner at Lucas Oil Speedway in Wheatland, Mo., finished ninth in the 50-lapper.