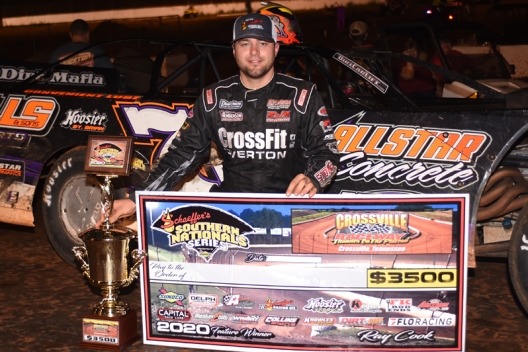 CROSSVILLE, Tenn. (July 23) — Brandon Overton left little doubt who had the best car at Crossville Speedway on Thursday. Or for that matter who has had the best car at Crossville Speedway for the last four years when the Southern Nationals Series has been in town. Overton, of Evans, Ga., dominated Thursday’s 35-lap Schaeffer’s Southern Nationals feature, leading flag-to-flag for his fourth straight series triumph at the 1/3-mile oval nestled atop the rolling hills of Tennessee’s Cumberland Plateau.

The series points leader finished 1.181 seconds ahead of fifth-starting Chris Madden of Gray Court, S.C., in winning his sixth series race of the season and a $3,500 check. Madden, who has three series victories of his own this season, finished runner-up despite losing several positions on a lap-11 restart before a mid-race tangle with Ross Bailes of Clover, S.C., that left Bailes more than slightly miffed.

Third-starting Cory Hedgecock of Loudon, Tenn., — the only driver other than Overton or Madden to win a Southern Nationals feature this season — finished third after challenging for the lead early and then slipping back a bit to battle Madden, Bailes and polesitter Donald McIntosh of Dawsonville, Ga., inside the top five for much of the race. McIntosh settled for fourth — his fourth top-five on the 2020 tour — while Tyler Millwood of Kingston, Ga., advanced four positions from ninth to complete the top five.

“My car’s just been really good,” said Overton. “I hate we let one slip away (Tuesday) night (at Tri-County Racetrack). I felt like I should’ve got it done … just some circumstances put us behind or whatever, but I couldn’t do it without my crew and all my help.”

Overton was the only driver to get below the 13-second mark during time trials, making it the third time in the last four trips to Crossville that Overton set the overall fast time. Taking advantage of his outside front row starting position, Overton bolted into the lead past polesitter McIntosh as they raced down the backstretch on the opening lap. Hedgecock managed to duck below the leader following a restart, but Overton quickly pulled back ahead. No one else had a match for his Crossville prowess.

“I just love coming over here,” added Overton. “Back when I drove for (Randy) Weaver we made many laps over here, you know, trying to test and stuff, so it just fits me good.”

Behind Overton, a gaggle of cars battled for second, including Madden and Bailes. Madden slipped back to fifth following a restart on lap 11, but rallied back by McIntosh and Hedgecock and was closing on Bailes when the two made contact entering turn three on lap 16. Madden clipped Bailes just as they entered turn three, sending Bailes spinning.

Bailes, who went to the rear of the field before pitting two laps later and then rallying back to finish sixth, showed his displeasure with Madden both on the track and on the front straightaway, where the top three finishers stopped for their post-race interview. Madden felt like it was a racing incident that he was willing to take the blame for.

That was of little consolation to Bailes, who has flashed good speed during the Southern Nationals, but has struggled to put together finishes to show for it as he continues to be bitten by bad luck. While Bailes was eager to talk to Madden about the incident, he was less forthcoming in his pit area 45 minutes later as he finished loading his Big Frog Motorsports Rocket XR1, though he did say he felt he’d raced Madden cleanly.

“I probably shouldn’t even say anything right now,” said Bailes. “It’s probably not the best time. I didn’t touch (Madden). I haven’t touched him all week.”

Hedgecock, whose series victory came at I-75 Raceway on July 14, was happy to be on the podium, yet away from the drama in his first race back with the tour after skipping three series events in south Georgia last week.

“I had a great car,” said Hedgecock. “Bailes kinda hooked me a little bit coming off (turn two) there and it kinda pushed the tire into the right rear and it’s ripped the tire all apart and I’d say that’s probably what got me. Hat’s off to Brandon and everything and I love when all this conflict ain’t got nothing to do with me. Half the time I’m normally in it, but this time I get to spectate.

“I could restart so much better than (Madden), and I think I kinda screwed up my right rear (tire) and I was really good on restarts, but the longer we ran the more we faded. On the restarts I think I could almost run with Brandon every once and awhile, but the longer we ran, the more he could roll the center a little bit better than I could. I was having to stop so much and just try to find that brown coming off, but you live and you learn.”

Notes: Brandon Overton now has 19 career Southern Nationals victories and needs one more to set the tour’s single-season win mark. His six victories this season tied the mark set by Chris Madden in 2007. … Overton’s four straight wins at Crossville have come with four different car owners: Stone-Weaver Racing (’17), Billy Franklin (’18), Rum Runner Motorsports (’19) and Wells & Sons Motorsports (’20). … Eleven cars finished the race, all on the lead lap. … The race was slowed by five cautions on laps three, 11, 16, 18 and 25. All were for slowing or stopped cars, except for Bailes’ lap-16 spin. … Four drivers — Kenny Cobble, Heath Hindman, Brett Wyatt and Riley Hickman — made their first series starts this season.

Polesitter Donald Mcintosh of Dawsonville, Ga., is chasing his first Southern Nationals win of the season and fifth of his career. McIntosh finished 10th in last year’s series race at Crossville. … Cory Hedgecock of Loudon, Tenn., has rejoined the series, his first race since finishing ninth at Senoia on July 16. Hedgecock won at I-75 on July 14 and is eyeing his third career Southern Nationals win. … Overall fast qualifier Brandon Overton of Evans, Ga., is going for his fourth straight series win at Crossville and his sixth win of the season. Overton’s nine top-fives leads the series. … The 18 cars signed in is the fewest of this year’s series through 10 events. … Feature cars rolled onto the track at 9:38 p.m.

Brandon Overton of Evans, Ga., was the only driver of the 18 qualifiers to get below the 13-second mark. Overton went out midway through Group B, stopping the clock at 12.984 seconds. He’ll start on the outside front row of the 35-lap main event alongside polesitter Donald McIntosh of Dawsonville, Ga., who set the fast time in Group A at 13.058 seconds. This was the second fast time of 2020 series for Overton. The top five drivers from each group are locked into the feature, with the remaining eight drivers grouped together in one last chance race to determine the final four rows of the main event.

The second group was considerably fast from top to bottom, with the last five drivers within one-tenth of each other. Logan Roberson of Waynesboro, Va., who was sixth quick in Group B at 13.331 and will start on the first row of the last chance heat, would have been locked into the featured with the same time in Group A. In fact, each driver from Roberson on back to Heath Hindman of Signal Mountain, Tenn., was was ninth in Group B at 13419 seconds, would have been locked into the main event if they had their respective times in the first group.

The Schaeffer’s Southern Nationals Series returns to the Volunteer State for the tour’s stretch drive. Three races remain, beginning with Thursday’s race at Crossville. The track nestled on the state’s Cumberland Plateau hosts the series for the eighth time. It’s been cloudy most of the day, but the rain has for the most part missed the track. On a positive note, the cloud cover has helped with the temperature and teams have taken advantage of temps in the low-80s for the second event in a row after dealing with sweltering heat during the four-race stint in Georgia last week.

Brandon Overton of Evans, Ga., a five-time series winner this season, leads the contingent to Crossville, where he’s won the last three series events. Chris Madden, who sits second in series points, just 16 behind Overton, has won two Southern Nationals features at Crossville, with his last win here coming in 2009. Madden is the most recent tour winner as he picked up $3,500 Tuesday at Tri-County Racetrack in Brasstown, N.C.