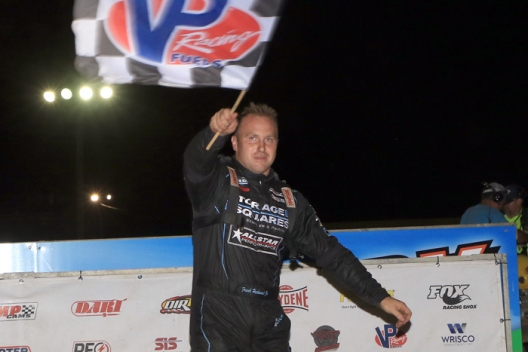 SPRINGFIELD, Mo. (July 23) — Frank Heckenast Jr. had a script for Thursday night’s 40-lap DIRTcar Summer Nationals feature at Springfield Raceway written before he rolled on the track. To his surprise, he executed it perfectly.

Mastering the inside lane around the quarter-mile oval, the 32-year-old driver from Frankfort, Ill., charged forward from the 11th starting spot to grab the lead from race-long pacesetter Brian Shirley of Chatham, Ill., on lap 25 and never looked back en route to his first Hell Tour victory of 2020 and a $5,000 check.

“Tonight’s one of those nights, it doesn’t happen often,” Heckenast said after making his first-ever visit to Springfield a winning one. “It might not happen for another five years, where you kind of plan on in your head how you think it will happen and it happens.”

Heckenast committed to running the hub in his family-owned XR1 Rocket and it paid off handsomely. The drivers in front of him couldn’t staunch his steady advance as he marched to a final victory margin of 1.342 seconds over Mason Oberkramer of Brosley, Mo., who made a low-side rally of his own from the 12th starting spot to finish second after overtaking Shirley on lap 38.

Shirley settled for a third-place finish after starting from the pole position and leading laps 1-24. Ninth-starter Jesse Stovall of Billings, Mo., climbed as high as third before placing fourth and three-time Summer Nationals champion Dennis Erb Jr. of Carpentersville, Ill., completed the top five in his first Hell Tour start of the season after starting sixth and running second for laps 10-21.

Coming off a series-high runner-up finish in Sunday night’s rain-shortened feature at Randolph County Raceway in Moberly, Mo., Heckenast didn’t seem to continue the momentum when he started and finished fourth in his heat race. But his hopes were raised when he returned to his trailer following his disappointing prelim performance.

“I didn’t really think we had a shot at winning at all tonight, I’ll be honest, after our qualifying and heat-race effort,” Heckenast said. “Then, after our heat race when we came in and our tires were killed, I’m like, ‘Hey, we may have a shot at this. A lot of these guys will fire off and really burn their stuff down. We might have a shot if we just maintain here. Maybe it’ll be a tire game more than anything.’

“And,” he continued, “everything just worked out for once.”

Heckenast’s eyes grew wide early in the A-main when he noticed one driver go against the high-running grain to make some passes on the inside of the track. He proceeded to follow suit, settling comfortably into an extreme low line that allowed him to pick off cars — he cracked the top five by lap 10 — and conserve his machine’s rubber.

“A lot of times when you’re racing — all these drivers have been there — you’ll tell yourself, ‘I think we got a shot at winning this thing,’ and then a lot of times it doesn’t happen, people move in your lane and whatnot,” Heckenast said. “But tonight, everyone went around the top (at the start), and I thought, Well, this is gonna be a rubber train up here. And then Stovall went down on the bottom and was pulling everybody, and I’m like, ‘Well, I got nothing to lose. We’re starting back here, so let’s go down there.’ Then it was just unbelievable how good the car was down there.

“I just tried to baby (the tires) on the bottom there. Running the top, (his rivals’ tires) were just getting so hot.”

Heckenast slid by Jason Feger of Bloomington, Ill., for fourth on lap 14, took third from Stovall on lap 17 and unseated Erb from second on lap 22. He kept chugging around the inside to nose ahead of Shirley for the lead on lap 25 and then gradually eased away to build roughly a half-straightaway edge.

“It’s just so tough when you’re leading like Shirley was,” Heckenast commented. “He’s out there checked out and it’s so hard after those cautions (the race was slowed on laps nine, 19 and 22) to just move down to the infield when you’re winning up there. I’ve been in his spot a million times and it never really works out this way for me, so tonight I’m happy it did.

“I got passed Brian and I thought, Well, I know we’re gonna have a caution and they’re gonna rail me on the top here. It was just one of those nights where we didn’t get a late caution or them lapped cars were down there (blocking his lane).”

Noting that Springfield’s flagman did an “awesome job” using the move-over flag and signals to inform slower cars that the leader was approaching, Heckenast had no trouble negotiating lapped traffic until the final lap when he forced his car underneath Dustin Walker of Peculiar, Mo., in turn two, sending Walker up the track and prompting the home-state driver to express displeasure with Heckenast on the cool-down lap.

Heckenast brushed off that run-in, though, acknowledging that Walker was “mad at me,” but at the same time asserting, “I’m just so god damn happy.” He had, after all, finally reached victory lane again in Summer Nationals competition — his third career series win was his first since July 10, 2018, at Shadyhill Speedway in Medaryville, Ind. — and emerged triumphant on his godson Jackson’s fourth birthday.

Shirley, 39, had no answer for Heckenast as he fell short of his second victory of the 2020 Summer Nationals.

“I don’t know if the top really went away,” said Shirley, who remained in the Hell Tour points lead. “I just think those guys, when they started running the bottom, they were able to keep their tires better than me.

“And maybe not,” he added. “We were just a third-place car. I was a little more off coming off the corner than what I wanted to be and just got slipping and sliding my right-rear and used it up pretty good, and Frankie was the better car tonight.”

A first-time visitor to Springfield, Shirley simply couldn’t come off his high line to repel Heckenast or, in the final laps, Oberkramer.

“I didn’t know (the bottom) would be as good as it was, but it looked like they were down there pretty good, up in the infield,” Shirley said. “I knew once Frankie got by me I couldn’t really go down there. My right-rear was used up pretty good.”

The 27-year-old Oberkramer, meanwhile, surprised even himself with his late move to net a career-best Summer Nationals finish of second.

“It’s just a testament to our program,” said Oberkramer, whose top finish in 11 previous 2020 starts was an eighth in June 26’s Lucas Oil MLRA event at Salina (Okla.) Highbanks Speedway. “We started deep in the field — I buried us timing in, we had a tough heat — but we never gave up. Me and Tony (Jackson Jr. of Lebanon, Mo.) put our heads together. We threw everything but the kitchen sink at it and it turned out all right.

“I looked up (with two laps remaining) and I was passing Erb, Stovall and Shirley all about the same lap, and I really was like, ‘I think I was just about to get lapped like five laps ago,’ and then we had a couple of cautions and we come back up through there. I didn’t know who was in the lead and I didn’t know how many laps we had to go, so I was like, ‘Just get all you can and keep digging.’

“We just kind of prepared the best we knew how for a rocky race and we just … we got lucky,” he concluded.

The race’s three caution flags flew for Payton Looney of Republic, Mo., who slid over the bank in turns three and four on lap nine while running sixth and slowed on the homestretch on lap 19; and Jackson, who stopped on the frontstretch on lap 22 due to a broken driveshaft.

Notes: Heckenast tallied his second victory of the 2020 season; his first was a $5,000 MARS tour score on June 25 at Davenport (Iowa) Speedway. … Tim Lance of Brimfield, Ill., one of six drivers still with perfect attendance through nine Summer Nationals events, enjoyed his best outing of the series with a sixth-place finish after using the inside groove to climb forward from the 18th starting spot. He rose as high as fourth — for a brief moment on lap 21 — as he turned around a Hell Tour effort in which he has struggled with a skipping engine. … Billy Moyer of Batesville, Ark., started from the outside pole and chased Shirley for the race’s first nine laps, but on a restart that circuit he immediately plummeted out of the top five and never recovered. The victim of a possible sealed tire, the Hall of Famer pitted during the lap 22 caution period before retiring six circuits later. … Overall fast-timer and heat winner Kyle Beard of Trumann, Ark., was running seventh when he pitted on lap nine. He finished 12th, the last driver on the lead lap. … Logan Martin of West Plains, Mo., was scheduled to start fourth in the feature but had to scratch because his car was sidelined by terminal mechanical trouble after he finished second in his heat. DIRTcar officials credited him with a 22nd-place finish in the feature.

Summer Nationals points leader Brian Shirley drew the pole position for the 40-lap feature after winning the third heat. He went to the outside of the quarter-mile oval to overtake Dennis Erb Jr. — a World of Outlaws regular making his first Summer Nationals start of 2020 — for the lead late in the distance. … Kyle Beard, who arrived at the track shortly before the start of hot laps, backed up his overall fastest qualifying lap with a triumph in the first heat. He passed Logan Martin coming to the white flag to assume command. … Martin held on to finish second but discovered terminal mechanical problems following the prelim, forcing him to relinquish his scheduled fourth starting spot in the A-main. … When Daryn Klein nearly spun off turn four while coming up to lap Tim Lance Jr. late in the second heat, Billy Moyer seized the opportunity to take the lead and head to victory. Klein settled for second after giving Lance a hip-check off turn four with the checkered flag flying; Lance slammed the outside wall and was towed off the track but it appeared he would start the A-main using a provisional after patching up his machine. … Tony Jackson Jr. failed to transfer in the first heat after a flat right-rear tire forced him to the pit area but recovered to win the consolation. … Will Vaught slid off the track between turns three and four on lap five of the third heat while battling Erb and Jesse Stovall for the lead. He will start the feature because the track gave him their provisional as the first non-transfer in the consolation.