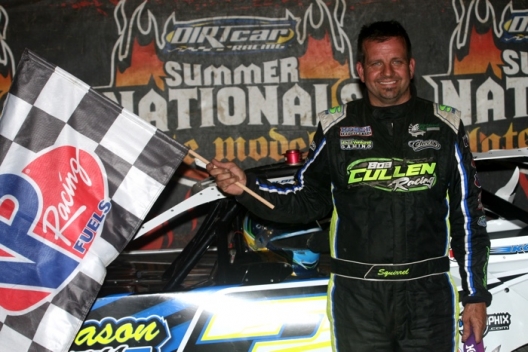 With his flag-to-flag triumph worth $10,000, the 39-year-old driver from Chatham, Ill., not only earned his first Hell Tour checkered flag of 2020 but also in one fell swoop snapped a six-month winless streak, rebounded from a last-lap loss just 24 hours earlier and — most importantly for his bank account — claimed his first five-figure check in over a year.

“It always feels good,” Shirley said of once again tasting victory. “It’s been awhile since I’ve been able to put it together to get a $10,000-to-win race. I feel like we win $5,000-to-win races all the time, obviously the last couple years. It’s just a good morale booster for the whole team.”

While Shirley has captured the last two Summer Nationals championships and started the 2020 campaign with three victories during January’s Keyser Manufacturing Wild West Shootout at Arizona Speedway outside Phoenix, he’s struggled to win the division’s events that pay $10,000 or more. His 13-win 2019 season included six $5,000 triumphs but just one five-figure score — the June 22 Hell Tour stop at Fairbury (Ill.) Speedway that paid 10-grand — and before that his last five-figure win was a $15,000 World of Outlaws Morton Buildings Late Model Series score on June 30, 2016, at Rockford (Ill.) Speedway.

Shirley ended the dry spell with aplomb, rolling off the outside pole to lead every circuit. He turned back a mid-race challenge from Shannon Babb of Moweaqua, Ill., to beat the four-time Summer Nationals champion to the finish line by 1.204 seconds.

Frank Heckenast Jr. of Frankfort, Ill., pressed Babb for second place late in the distance before losing ground in the final laps while setting for a third-place finish that represented his first top-five run of the 2020 Summer Nationals. Jason Feger of Bloomington, Ill., started and finished fourth and Ryan Unzicker of El Paso, Ill., improved one position to place fifth.

Taylor Scheffler of  Waukesha, Wis., crossed the finish line in fourth place for what appeared to be personal-best performance on the Summer Nationals. The 26-year-old driver’s car weighed in six pounds light following the race, however, disqualifying him from his finishing position and relegating him to 22nd and last in the official rundown.

The race’s two caution flags were caused by Bobby Pierce of Oakwood, Ill., who slowed on lap 11 with a flat left-rear tire following contact with Feger off turn one and then slowed again on lap 15 to make a pit stop and change his right-rear tire compound. He rallied to finish seventh.

Shirley’s trip to victory lane helped erase the memory of his heartbreaking defeat in the previous night’s 40-lap Summer Nationals A-main at Spoon River Speedway in Banner, Ill. He led the entire distance until falling on the last lap to Kent Robinson of Bloomington, Ind., who snatched the $5,000 top prize and left Shirley with his second consecutive runner-up finish on the circuit.

“Last night was definitely a bummer,” Shirley said. “I just lost control of the race. I felt like I had it in control. I thought I fought those guys early enough to save my stuff, and then K-Rob just had a better car at the end.”

At Farmer City’s quarter-mile oval, Shirley didn’t allow any of his rivals to get close enough for a dramatic last-lap move. He felt some pressure just before and after the race’s halfway mark from Babb, who hustled forward from the eighth starting spot to second by lap 11, but pulled away down the stretch.

Thinking back to an error in judgement that cost him the lead to Babb in July 11’s Summer Nationals feature at Fairbury proved critical for Shirley.

“I felt like I made that mistake at Fairbury on that caution to give (Babb) the top,” Shirley related. “I didn’t want to make that mistake twice, especially in (turns) three and four. I knew me car was good enough to hold him off in the middle of one and two, and then once I seen three and four was pretty good when I moved up there I was in pretty good shape.

“My crew guy was pointing to go to the bottom for probably 15 laps, but I just wasn’t gonna give Babb that high side until I knew I was in control. It’s just Babb. Farmer City, Babb … you just don’t give that guy the high side, and I wasn’t gonna do it tonight.”

Shirley certainly knew Babb had risen up to threaten him, but his Bob Cullen-owned XR1 Rocket proved too stout to cede the lead.

“I seen him, and he raced me really respectful and I was just able to get back out in front of him,” Shirley said. “I knew if I could clear him off four I’d be good. This was kind of like old Farmer City — one and two on the bottom, three and four on the top. You could get a good run (off four).

“It was just one of those deals where tonight was our night.”

The victory extended Shirley’s Summer Nationals points lead over Pierce through six events. He didn’t commit to running the entire schedule in search of a third straight title, but he didn’t rule it out.

“It’s no different than the Lucas (Oil Late Model Dirt Series) deal — I hate telling people I’m gonna do something and not do it,” said Shirley, who planned to follow the Lucas Oil Series full-time this season but dropped off the national tour in June. “I get paid to go to a race. Bob says, ‘Here, listen, you don’t need to worry about what race you want to go to. Just go to the closest one and the one that makes the most sense for the team.’ That’s really where it’s at for me right now.

“This (the Summer Nationals) makes sense. I can race night-in, night-out and try to get better with our equipment. If it ends up that we run the whole deal, it’s just the way it was.

“It’s not a bad deal,” he added, referring to the Hell Tour. “A lot of people, like (Lucas Oil regulars) Terbo (Tyler Erb) and (Kyle) Bronson, they realize that when you come in here this deal’s tough, because they’re coming into our territory, our racetracks. When we’re going to their territory and their races, they all look better.”

Babb, 46, couldn’t quite summon enough from his XR1 Rocket machine to unseat Shirley.

“Brian was real good tonight,” said Babb, who won the last of his two career Summer Nationals races at Farmer City way back in 2004. “The track was just super good too. I mean, it was just wet and heavy and fast, about all you could get really, and I was just fortunate to get to second.

“I got to him, and I knew if I could get by him real fast, it was gonna be about my only chance. Once he knew where I was into second, he was able to watch his (crew) guys and do everything right. He run the middle and the top … it was just gonna be real hard for me to pass him.”

“We changed some stuff on the car that we never run before and I’m trying to just get used to it early (in race nights),” said Heckenast, whose best finish entering Friday’s action was a pair of sixths. “We figured it out last night late (in finishing sixth at Spoon River) and we figured it out tonight late. We just gotta put a whole night together like Shirley. He’s starting to get in a rhythm again and that’s not what we needed, but good for him. He works hard and he deserves it.”

Heckenast felt he left something on the table in his run to a third-place result.

“I went soft on tire, and I gotta keep telling myself how easy I am on tires,” Heckenast said. “That (right rear) tire looks like I never pulled out on the racetrack. That’s really upsetting because I could have really pushed the limit. I was just saving it the whole time and babying it because I didn’t want to get it hot and chunk it out.”

Notes: Shirley tallied his 27th career Summer Nationals victory, pulling him out of a tie for fifth with Bobby Pierce on the circuit’s all-time win list. … Kent Robinson started third one night after his dramatic victory at Spoon River but was never a factor. He fell back immediately and was outside the top 10 when he retired. … Tyler Carpenter of Parkersburg, W.Va., was unable to crack the top 10 before pulling his car to the infield on lap 30. Steam pouring from underneath his car’s hood signaled terminal engine trouble that apparently will force him off the Hell Tour. … Thirteen of the feature’s 22 starters were running at the finish.

The 50-lap feature was on pace to roll onto the track before 9 p.m. … The front row for the A-main is a flip of last night’s starting lineup at Spoon River Speedway: Brian Shirley starts from the pole with Bobby Pierce on his outside. … Pierce had started on the pole for the last two Summer Nationals feature; Shirley has two straight runner-up finishes on the series. … Kevin Weaver survived an opening-lap slide over the turn-one cushion to transfer into the feature. … Frank Heckenast Jr. recovered from his involvement in Jason Wagner’s turn-two spin on the opening lap of Heat 3 to finish third. … Tyler Carpenter will use a provisional to start the A-main after pulled out of the third heat because his deflating left-rear finally blew out on lap seven. The exploded flew high into the air on the homestretch and one chunk that landed over the banking was visibly smoking. … Joining Carpenter as provisional starters are Bob Gardner, Russ Adams and Tim Lance.

The DIRTcar Summer Nationals moves to Farmer City (Ill.) Raceway on Friday for a $10,000-to-win program that marks the seventh straight season and 29th time overall that the quarter-mile fairgrounds oval has hosted the Hell Tour.

Gordy Gundaker of St. Charles, Mo., was the winner of last year’s series stop at Farmer City, but he will not compete in this year’s event because he is racing a Lucas Oil Late Model Dirt Series show at his family’s Tri-City Speedway in Granite City, Ill. Among weekly Late Model feature winners at Farmer City this season are Allen Weisser of Peoria, Ill., Kevin Weaver of Gibson City, Ill., and Mike Spatola of Manhattan, Ill.

Friday’s program will include hot laps, time trials, preliminary races and the 50-lap feature event. Along with the Summit Modified Nationals, Crate Late Models and stock cars will also be in action.