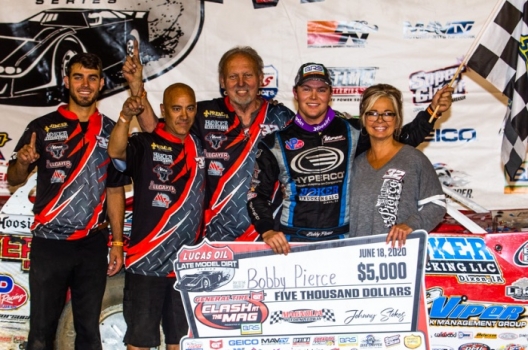 After all, the night’s top qualifier, series points leader Jimmy Owens, clicked in at 13.273 seconds and 24 of 55 entrants turned quicker laps than Pierce.

But the young driver went to work in his heat race, grabbing a victory that earned him the outside front-row starting spot in a 25-lap prelim in the first of three nights of action at the General Tire Clash at the Mag.

And Pierce didn’t slow down one bit in the feature, blitzing into the lead after starting alongside Owens and cruising to a $5,000 payday for his first feature victory of 2020.

“Really, how the night started I was not happy. Qualifying sucked and I would’ve been like 20th (quickest) in Group A,” Pierce said. “But all in all it ended up being a great night. It’s my first win of 2020 so it feels great. Last week, one got away from me when a caution came out. So I felt like we were really due for one.”

The pole-starting Owens, the Newport, Tenn., driver who finished 1.4 seconds behind Pierce at the checkers, nabbed the runner-up spot from Ross Bailes of Clover, S.C., with three laps remaining for his 10th consecutive top-five finish on the series.

Bailes, who ran second the first 22 laps, settled for third ahead of Shane Clanton of Zebulon, Ga., and Tyler Erb of New Waverly, Texas.

With one victory under his belt, Pierce was already looking ahead to Saturday’s $15,000-to-win finale at Magnolia. Event points accrued in Thursday and Friday’s preliminary features set the first nine rows of the feature lineup for the 100-lapper.

“It does feel great. But 100 laps — I think it’s 100 laps come Saturday — it’s going to be a little different,” Pierce said. “You know, hopefully we just got a get a little better, because I felt like when I got to lapped cars there I’d struggle a little bit. I know my dad was giving my signals and it seemed like his sticks were getting a little closer every lap towards the end (signifying his pursuers were catching him).

“I messed up just a couple of times. It’s hard, you can barely ever mess up with this competition, so it just feels great, you know? First night, we’ve got the monkey off our back and we can go celebrate a little bit and get ready for the next two nights.”

Owens didn’t get a good jump from inside the front row, and 25 laps with a single caution — Devin Moran had a flat tire on the fourth lap — didn’t give him much time to catch the speedy Pierce.

“The track there, when they prepped it on the bottom, it just had a lot of crumbs and stuff and it didn’t pack in near as good as the high side,” Owens said. “We didn’t get took off as good as we wanted to, then me and Ross raced right there, and it was really just right around the high side, and extremely hard to do anything with as far as passing.”

Bailes, who a week earlier captured his first Lucas Oil victory of the season at Cherokee Speedway in Gaffney, S.C. for Ocala, Fla.-based Big Frog Motorsports, found more success in one of his other rides for North Carolina’s Lamm Autosports.

“This place is awesome. I’m still getting the hang of it,” Bailes said. “There at the beginning I thought I had something for him, but it kind of went away there at the end. But congrats to Bobby and Jimmy, and thanks to Jimmy for running me clean there at the end.

“I’ve been here once before, and you know, we got better there at the end the last time we came. But these guys are good no matter where they go. They’re good when they unload.”

Notes: Pierce won his 11th career Lucas Oil Series victory and first since July 20, 2019. … Twenty-two of 24 starters finished on the lead lap and everyone was still running. ... Neil Baggett had engine problems in hot laps and climbed into a Brian Rickman's backup car for time trials. A second-place heat race finish put him in the main event. … Joseph Joiner and Drew Armstrong both made the lineup for their first Lucas Oil features. … Frank Heckenast Jr. led the first four laps of the fourth heat but fell back after a restart and failed to transfer to the night’s feature. … Shelby Sheedy was twice a spinner in the fourth heat. … Texas driver Chris Brown, competing on the Lucas Oil Series for the first time since May 2016, spun in the fifth heat when he caught the inside berm in turn three. … Justin McRee’s night ended when he got into the first-turn wall at the outset of the final heat. … Tanner English led 10 laps of the final consolation race but fell to third behind Scott Dedwylder and Michael Page in the final laps in failing to transfer. … No championship points are awarded until Saturday night while Thursday and Friday prelims also provided no provisional starting spots for the 25-lappers.