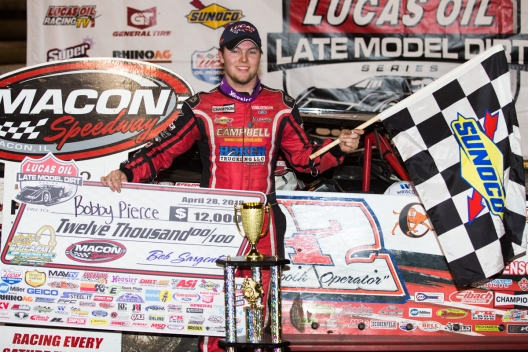 MACON, Ill. (April 28) — The details of Saturday night’s St. Louis U-Pic-A-Part 100 at Macon Speedway show that Bobby Pierce drove off the outside pole and led all but a single lap en route to a $12,000 victory.

The reality of the Lucas Oil Late Model Dirt Series-sanctioned race, however, is that Pierce’s triumph was far more difficult than it might first appear. Wins at the elbows-up, fifth-mile bullring never come easy, after all.

In order to complete a sweep of the Lucas Oil tour’s weekend doubleheader in his home state, the 21-year-old star from Oakwood, Ill., had to not only turn back early pressure from Josh Richards of Shinnston, W.Va., and Shannon Babb of Moweaqua, Ill., but also fight off a furious late-race challenge from Ryan Unzicker of El Paso, Ill.

Oh, and by the way, Pierce also cracked the outside wall quite solidly with his Dunn-Benson Racing XR1 Rocket car’s right-rear wheel late in the distance, adding even more anxiousness to what would be the third time he’s captured Macon’s Lucas Oil event in the last five years.

“I never thought we’d sweep this weekend,” said Pierce, who also registered a $12,000 victory in the previous night’s stop at Tri-City Speedway in Pontoon Beach, Ill. “I was telling everybody if we got a win this weekend, it would be here and not yesterday, but we lucked out on both of these.”

Pierce actually lost the lead on lap 93 to Unzicker, who charged off the inside of turn four to nose ahead at the start-finish line as Pierce was hampered by lapped traffic. But Pierce quickly rallied, sailing around the outside of Unzicker exiting turn two to regain command for good as lap 94 was scored.

Unzicker, 36, mounted one more last-ditch bid on the final circuit in his familiar No. 24 — a machine constructed by Pierce’s father Bob —but had to settle for a career-best Lucas Oil finish of second, 0.416 of a second behind Pierce.

Babb, who started from the pole position and briefly drew alongside Pierce midway through the feature, pulled close to Pierce and Unzicker for the final two laps but had to be content with a third-place finish in his XR1 Rocket that gave Land of Lincoln drivers a sweep of the podium positions.

Lucas Oil points leader Jonathan Davenport of Blairsville, Ga., ran just outside the top five for much of the distance but surged his Lance Landers-owned Longhorn into fourth on lap 75 and finished there while defending series champion Richards, who won last year’s Lucas Oil stop at Macon, fought a tight-handling Best Performance XR1 Rocket to a fifth-place finish.

Racing less than two weeks after the April 16 death of his Dunn, N.C.-based team’s 77-year-old founder and co-owner Carlton Lamm, Pierce felt he might have been propelled to victory by his Hall of Fame car owner’s spirit.

“I was really nervous there, not so much (with) the lapped traffic, but I hit the wall with the right-rear wheel,” Pierce said. “I hit it coming out of four — the wall really sneaks up on you. Nine times out of 10 you do that and you have a flat tire, so I think someone up there was helping me out.”

Lamm certainly would have been proud to witness the performance turned in by Pierce, who entered the weekend with just a single top-five finish in 14 Lucas Oil starts since joining the Dunn-Benson operation for the 2018 season. Racing in his backyard, though, catapulted Pierce back into form.

“Man, I’m really glad to be back home racing,” said Pierce, who grew up sliding around Illinois’s ovals. “I keep saying tracks I know compared to tracks I don’t know, but I think it’s just … you gotta have laps at these places when you compete with these (Lucas Oil) guys to the point where it just kind of comes natural. All these other places I go to (new tracks), it’s just such a learning curve that just nothing really feels very natural like this.”

Nevertheless, Pierce was also confident that the momentum he gained with two consecutive wins will carry over to the remainder of his first season following the Lucas Oil schedule.

“I’m back home, but I think we’ve really found some stuff on this car that I like,” said Pierce, who tallied his seventh career Lucas Oil triumph. “So I’m pretty excited to get going the rest of the year.”

Unzicker could only shake his head after falling short against a young driver who knows well from their many laps racing against each other on the UMP DIRTcar Summernationals. His first-ever national touring series victory was within his sights but he couldn’t close the deal after slipping ahead of Pierce on lap 93.

“I can’t beat him in the dang Pierce car (Bobby’s old ride in his father’s equipment) let alone now the Rocket,” Unzicker, who started sixth, said with a smile. “We’ve been fighting trying to beat him this whole time when he was running back home … he’s just a tough competitor and that whole team’s tough.

“I’m glad to see them get a win, and glad for my team too because we’ve been busting butt in the garage and trying to make strides and do things. I feel like our program’s been pretty good and this is a good finish to show that.”

Babb, 44, ran in the top three throughout the race, swapping second early with Richards and doing the same with Unzicker until ceding the runner-up spot to him for good on lap 65. He couldn’t quite match the speed of the top two finishers.

“I felt like we had a really good car,” said Babb, one of Macon’s favorite sons. “I was just following Bobby there for a long time and just letting laps go by … Bobby does a really good job of running around the cushion there. You’re waiting for him to mess up and he never does, so hat’s off to them guys. I know they’ve been working hard.”

According to Babb, his third-place position in the final laps put him “in the spot to watch a hell of a race there at the end.”

Five caution flags slowed the feature, none for significant incidents. Myles Moos of Lincoln, Ill., stopped due to a broken driveshaft on lap 11; Hudson O’Neal of Martinsville, Ind., hopped the cushion in turns three and four on lap 29; Kyle Bronson of Brandon, Fla., slowed with a flat left-rear tire on lap 37; and Brian Shirley of Chatham, Ill., slowed on lap 64. A caution was also thrown on lap 31 because a wheel cover came off a car and was spotted in turn three.

Notes: Pierce also won Macon’s Lucas Oil Series event in 2014 and ’16. … Scott Bloomquist of Mooresburg, Tenn., was never a factor in the feature, finishing three laps down in 18th place. He pitted during a lap-64 caution flag but wasn’t able to turn around his frustrating night. … Jimmy Owens of Newport, Tenn., who won the 2015 Lucas Oil event at Macon, ran in fourth place during the race’s middle stages but slipped to seventh in the final rundown. … Dennis Erb Jr. of Carpentersville, Ill., had his 2018 struggles continue with a 13th-place finish after he ran in sixth place much of the race’s middle portion.