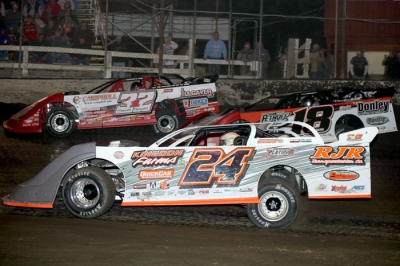 Ryan Unzicker (24) bids for the lead at Macon. (doublejphotos.smugmug.com)

MACON, Ill. (April 28) — Ryan Unzicker of El Paso, Ill., might have had a smile on his face after finishing second in Saturday’s St. Louis U-Pic-A-Part 100 at Macon Speedway, but one comment he made in an interview with DirtonDirt.com following the Lucas Oil Late Model Dirt Series-sanctioned event indicated that his result was slightly bittersweet. | RaceWire

“We’re gonna get one of these wins one of these days,” Unzicker said, well aware that he’s still chasing his first victory in a national touring series show.

Unzicker, 36, has certainly established himself as one of the Midwest’s most solid regional talents over the past decade with his exploits, including eight straight top-five points finishes and nine wins on the UMP DIRTcar Summernationals, a 2011 weekly DIRTcar title and a prolific 19-win 2017 campaign highlighted by the Fairbury (Ill.) American Legion Speedway championship. A validating Lucas Oil or World of Outlaws Craftsman Late Model Series triumph, however, has eluded him. He owns three career wins worth $10,000 or more (Summernationals at Oakshade Raceway in Wauseon, Ohio, in 2012 and FALS in ’13, Slocum 50 at 34 Raceway in West Burlington, Iowa, in ’15) but hasn’t bagged a national tour race like several of his Illinois-based Hell Tour contemporaries.

It would seem that Unzicker’s moment in the national spotlight is coming, though. It’s no coincidence that his Lucas Oil career-best runner-up finish at Macon to three-time Summernationals champ-turned-Lucas Oil regular Bobby Pierce of Oakwood, Ill., comes after he registered an identical personal-high WoO placing of second in last July’s Prairie Dirt Classic at FALS and went on a tear in weekly action the rest off the season.

Speaking of his Bob Pierce-built Dirt Late Model, Unzicker asserted, “It’s been really good since the end of last year and (now) the beginning of this year.”

Indeed, Unzicker closed 2017 as one of the division’s hottest drivers, piloting his Pierce Platinum mount to seven wins in eight starts, including six in a row, from Sept. 9-30 as he made a furious last-ditch bid to overtake Rusty Schlenk of McClure, Ohio, in the DIRTcar weekly points race. He settled for second in the organization’s standings, but it was clear that he had found a winning combination.

Carrying the momentum across the off-season, Unzicker steered his No. 24 to his first victory of 2018 last Friday night in a DIRTcar-sanctioned weekly card at Farmer City (Ill.) Raceway — and then the machine was nearly good enough to carry him to a $12,000 victory at Macon, a high-banked, fifth-mile bullring with which he’s very familiar. He’s won at least one feature at the track in each of the last three seasons and, after he wrestled second place from Shannon Babb of Moweaqua, Ill., on lap 65 of Saturday’s century grind and slipped past race-long pacesetter Pierce to lead lap 93, it appeared he was primed to claim his first-ever Lucas Oil race in truly dramatic fashion.

Pierce, 21, wasn’t surprised that Unzicker rose up to challenge him in the closing stages of Macon’s frenzied feature.

“I knew if it was someone it was probably gonna be him because these long races here he’s always just cat-fishing on the bottom,” Pierce told DirtonDirt.com pit reporter Dustin Jarrett after winning Macon’s Lucas Oil event for the third time in five years. “Every single time Ryan’s here he’s really good on the bottom come late in the race. I’ve raced here many times with him, and it seems like it’s always coming down to the wire.

Pierce’s “something” was fortuitously sliding ahead of the lapped Mason Zeigler through turns three and four on the very circuit that Unzicker was scored the leader. While the low-riding Unzicker was able to sneak ahead on lap 93 as Pierce momentarily had his cushion-pounding pace slowed by Zeigler’s presence and slight bobble in front of him, Pierce’s move to overtake Zeigler allowed him to remain to Unzicker’s outside and regain command off turn two.

Because Pierce cleared Zeigler before Unzicker could shoot to the cushion, Unzicker’s best hope for stealing the race was dashed.

“When I dove underneath him there with seven to go, I seen him getting a little caught up in that lapped traffic up top and I figured, What the hell? I’ll try it,” Unzicker said. “And if he wouldn’t have slid (Zeigler), I was going to the top. I looked over and seen that red nose (of Pierce’s Dunn-Benson Racing ride) and I’m like, ‘Damn it.’ I thought I was gonna get it done right then and there. But he’s a tough competitor.”

Unzicker made a final attempt to unseat Pierce on the final lap. With Pierce and Unzicker behind the slower cars driven by Gregg Satterlee (outside) and Earl Pearson Jr. (inside), Unzicker surged underneath Pierce through turns three and four but didn’t have enough momentum to beat Pierce to the finish line.

“I was trying to decide (a plan) coming down the backstretch,” Unzicker said. “I was gonna do something. I wasn’t following him up top. I drove ‘er in (to turns three and four) pretty hard and seen Earl’s back bumper come up real, real close to me, so I kind of steered to the right (exiting turn four) and got around him. Then I was looking over to my right, and it took (Pierce) a long time to get to me.”

Considering Pierce was able to power off the outside of turn four to nip Unzicker by barely a car length, could Unzicker have emerged triumphant if he had let his car drift up in front of Pierce? He wasn’t so sure about that.

“I think maybe if I would’ve slid him he probably would’ve crossed-checked me and come back underneath,” Unzicker analyzed. “Either way, we give the fans one hell of a show.

“I just love this little place, man. Macon Speedway Summernationals (the Herald & Review 100) always has a great race, and obviously Lucas Oil has a great race. (Promoter Bob) Sargent and the gang there, they just put on a hell of a track here.”

Unzicker will likely have about a half-dozen more chances this season to bag a national tour victory, starting with Lucas Oil’s June 1-2 Salute to the Troops 75 at La Salle (Ill.) Speedway that pays $25,000-to-win. There’s also Fairbury’s $30,000-to-win WoO-sanctioned Prairie Dirt Classic on July 27-28 and events on June 29 at Terre Haute (Ind.) Action Track and June 30 at Federated Auto Parts Raceway at I-55 in Pevely, Mo., that the WoO will co-sanction with the Summernationals, which figures to be Unzicker’s primary mid-season focus for the ninth consecutive year.

In fact, perhaps this could even be the year that Unzicker finally breaks through to win the $25,000 Summernationals championship. He was fourth in last year’s Hell Tour points standings but has finished as high as second (2014), and this year’s Summernationals looks to be a quite wide-open affair with Pierce’s three-year reign ending because he’s now a Lucas Oil Series regular.

“We think we’re gonna do it,” Unzicker said of the Summernationals, which kicks off June 13 at Peoria (Ill.) Speedway and runs through Oakshade’s July 14 finale. “We only got two (Pro Power) motors … we just gotta race smart. We’re just trying to put the pieces togethers … the funds here tonight (he earned $5,500 at Macon) will help try to kick-start that process.”

“I knew if it was someone it was probably gonna be (Ryan Unzicker) because these long races here he’s always just cat-fishing on the bottom. Every single time Ryan’s here he’s really good on the bottom come late in the race. I’ve raced here many times with him, and it seems like it’s always coming down to the wire.”