There was a database error. 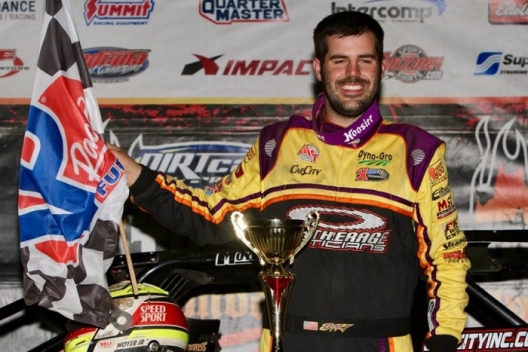 After completing a sweep of the Hell Tour’s swing through Michigan with a flag-to-flag victory in Thursday night’s 40-lap feature at Merritt Speedway, Moyer was riding high with the grueling month-long series nearing its conclusion.

Moyer, 29, of Batesville, Ark., duplicated his score in Tuesday night’s Summernationals stop at Hartford (Mich.) Speedway, racing off the pole position again to lead the entire distance. He also faced a stiff late-race challenge for the second consecutive start — this time from Brandon Thirlby of Traverse City, Mich., who caught Moyer with five laps remaining but fell 0.374 of a second short of denying Moyer back-to-back Hell Tour checkered flags.

“Consistency is what we were lacking and I think we’re finding it,” Moyer said of his strong Summernationals finish. “We’ve just got some good help, some good little juju going. The car’s really good, we’re adjusting on it right and I’m just trying to do my job in the seat.”

Thirlby, who lives about an hour north of the quarter-mile oval, recorded a runner-up finish two days after placing third in Hartford’s Summernationals A-main. Another local standout, Dona Marcoullier of Houghton Lake, Mich., finished third, less than 1 second behind Thirlby.

Outside polesitter Rich Neiser of Fruitport, Mich., finished fourth after outdueling Bobby Pierce of Oakwood, Ill., who settled for a fifth-place run after entering the evening’s action having already clinched his third consecutive Summernationals championship.

Moyer, whose made his first appearance at Merritt last August with finishes of sixth and seventh in a World of Outlaws Craftsman Late Model Series doubleheader, credited his dramatic victory in the third heat for propelling him to his ultimate glory in the night’s headliner. He worked the outside lane to perfection in pulling off a last-lap charge off turn four to nip Pierce by inches at the finish line.

“That probably won us the (feature) race,” said Moyer, whose triumph earned him the right to redraw for one of the top-four starting spots in the A-main. “Starting seventh (like Pierce did), it would’ve been hard to win.”

Moyer threw caution to the wind to capture the heat.

“When you’re leading, you’re a sitting duck, so I knew (Pierce) running around that bottom, he was creeping,” Moyer commented. “I knew I had some room on third so I started feeling myself out in the middle, and I kept going and going and finally I was like, ‘Man, I’m gonna give it a shot. If it don’t work, who cares?’ I just blasted it in there, we got the win there and it got us on the pole.”

Later, as the feature wound down, Moyer found himself in the position Pierce had been in the heat. With the 30-year-old Thirlby, who grabbed second place from Cody Mahoney of Hanover, Ind., on lap 25, tucking up behind Moyer on the 35th circuit and lapped cars ahead, Moyer certainly was vulnerable.

But Moyer kept his cool and piloted his Billy Moyer Victory Race Car smoothly to the finish.

“I knew somebody was on my butt, but I just protected the bottom,” said Moyer, who extended his points lead in the Hell Tour’s Champions Week points standings sponsored by FK Rod Ends. “I was entering wide like I was supposed, but I didn’t think they could roll me through the middle. I just made sure nobody messed with me.

“I had a feeling (Thirlby) probably couldn’t go around me on the outside, so I just slowed myself up to kind of inch around and just not miss that bottom.”

Moyer’s fourth Summernationals victory of 2017 — tying him with Pierce for the second-most on the tour — prompted him to heap praise on the primary supporters who allow him to race for a living.

“My racing career, without (sponsor) Crop Production Services, I’m nowhere near where I’m at,” said Moyer, who tallied his ninth career Hell Tour win. “And without Keith Berner of Accu-Force (Dynos & Testers), I’m probably not very far along either. That guy just takes me under his wing. I mean, he’ll cuss me out, he’ll tell me I’m a dumb ass, but at the end of the day, he’s right there telling me what I need to hear. I just can’t say enough about that guy and what he’s done for my career.

“You’ve got to surround yourself with the right help, and surrounding myself with a good sponsor, a good engine guy that’s for you (Pro Power’s Bill Schlieper) and a guy like Berner … that’s why I can be where I’m at.”

Thirlby, who started fourth, was able to pull his family-owned XR1 Rocket to Moyer’s inside off turn four on lap 36, but he couldn’t surge ahead. He wasn’t able to mount another similar bid but wasn’t disappointed with his career-best Summernationals finish.

“Billy got in lapped traffic and I kind of saw the 77 (Adam Bowman of Seymour, Ind.) running him off the track and inside the track and I made a move,” said Thirlby, who was a Summernationals regular in 2010. “I run up on the inside of (Moyer) with four to go, but I think if I would’ve stayed in the fuel I would’ve taken us both out. I kind of backed up, lost some momentum, and that was it.

“Just running up front the last two nights with these guys has been awesome, though. I’ll take a second against these guys any time.”

Marcoullier, 33, finished third driving his older 2013-vintage Rocket car two days after riding out a hard crash with two laps to go in Hartford’s feature that left his XR1 Rocket a virtual write-off. He was still a bit sore from the impact but looked to be 100 percent as he climbed forward from the eighth starting spot to reach third place on lap 27 and make a late bid for victory at his home track.

“I wish we could’ve had about five more laps,” Marcoullier said. “They (Moyer and Thirlby) were committed to the bottom and I think we could’ve rolled ‘em on the top, but I can’t complain.”

The third-starting Mahoney ran second for more than half the distance, even drawing close to Moyer when the leader was slowed by lapped traffic near the halfway mark. But after the lone caution flag flew on lap 21 — for a spin by Mahoney's teammate Bowman — he began a steady fade over the remaining circuits and finished seventh.

After the completion of the UMP modified feature, the field for the 40-lap Late Model A-main rolled out to begin pace laps at 9:40 p.m. ... Billy Moyer Jr. picked the pole position for the second straight feature, giving him an opportunity to duplicate his flag-to-flag victory in Tuesday night’s 40-lap Summernationals event at Hartford Speedway. … Bobby Pierce will start seventh rather than in the top three due to his last-lap loss to Moyer in the third heat race. … Ryan Unzicker, who won last year’s Summernationals feature at Merritt after starting from the pole position, will take the green flag from the ninth spot this time. … Merritt champ Eric Spangler had to use a UMP national points provisional to gain entry to the feature after experiencing trouble in his heat race. … Other provisional starters are Dustin Nobbe and Paul Stubber (Summernationals) and Andrew Terrill (track).

Rich Neiser slid underneath Jason Feger to grab the lead on lap three and marched on emerge victorious by 1.314 seconds over Dona Marcoullier, who overtook Feger for second on lap five. Feger settled for third while Ryan Vanderveen placed fourth.

Working the outside lane to perfection, Billy Moyer Jr. drew alongside race-long pacesetter Bobby Pierce off turn four on the final lap and nipped 20-year-old star by inches — a mere 0.112 of a second on the transponders — for the win. Mike Staszak brought out a caution flag with a turn-four spin on lap two and Mike Bores slowed the race on lap five when he stopped on the homestretch.

Brandon Thirlby dominated the action, leading every lap to defeat Gordy Gundaker by a massive margin of 5.721 seconds. Travis Stemler and Chad Finley were close behind Gundaker in third and fourth, respectively, at the checkered flag. The opening lap was slowed twice by caution flags — first for Merritt regular Bobby Timmer’s turn-two spin, then for a tandem twirl by Michael Luberda Jr. and Brad Harden between turns three and four. Another caution flew on lap one when Harden spun in turn one and knocked an inside marker tire askew.

Cody Mahoney cruised to a flag-to-flag victory, beating his Bowman Motorsports teammate, Adam Bowman, to the finish line by a robust 2.777 seconds. Ryan Unzicker slipped past Curtis Roberts midway through the race to finish third.

Cody Mahoney of Hanover, Ind., was the overall fastest qualifier in the 40-car split time-trial session, turning a lap of 13.361 seconds. He will start from the pole position in the first heat.

Bobby Pierce of Oakwood, Ill., was quickest in the second group with a lap of 13.387 seconds, earning him the pole for the evening's third heat.

Forecasts called for highs only in the upper 60s on Thursday, but, with sun has periodically peaking through the clouds, temperatures have climbed well above that figure. It’s expected that the air will cool off this evening, however, and the chance of an isolated shower is very small. … One year after joining the Hell Tour schedule for the first time, Merritt Speedway remains one of just three tracks in Michigan to hold a Summernationals event in the circuit’s three-decade-long history. I-96 Speedway in Lake Odessa has run six Hell Tour features (2005, 2010-14) and Hartford Speedway has had four races after Tuesday night’s show. … Since Merritt’s inaugural Summernationals event in 2016 the facility has undergone significant improvements, including the erection of new aluminum grandstands (obtained from Indiana’s Illiana Motor Speedway) that has nearly doubled the seating capacity and a bright new lighting system. … Dona Marcoullier of Houghton Lake, Mich., who lives just 10 minutes from Merritt, said he feels good physically after crashing hard on Tuesday night at Hartford but will be behind the wheel of his 2013-vintage Rocket car (a former Rick Eckert-driven machine) because the XR1 Rocket he wrecked was a write-off. He will remain at Merritt the rest of the weekend to compete in the track’s Wood Tic event. … Seven-time and defending Merritt champion Eric Spangler of Lake City, Mich., will look to add a Summernationals victory to his bulging Merritt resume. He won a World of Outlaws event at his home track last year but dropped out of last year’s Hell Tour feature. … Curtis Roberts of Coleman, Mich., is hoping to shake some Hell Tour bad luck this evening. His trip to Hartford on Tuesday was delayed because the hitch ball connecting his trailer to his toterhome broke about 45 minutes away from the track (fortunately while driving slowly through a gas station parking lot) and needed repairs — and then in Hartford’s feature he was an early retiree due to a bent right-front tie-rod from a scrape with Indiana’s Adam Bowman. Roberts and Co. found themselves working on a balky hauler generator upon arrival at Merritt, however.

After a day off — for Wednesday night’s rainout at Thunderbird Raceway in Muskegon, Mich. — the UMP DIRTcar Summernationals resumes with Round 23 of the series at Merritt Speedway.

The Hell Tour stops for the second time in its history at Merritt, a quarter-mile oval in northern Michigan that carries a UMP DIRTcar sanction for its weekly Dirt Late Model action and hosted its inaugural Summernationals show in 2016. Ryan Unzicker of El Paso, Ill., won last year’s Hell Tour event and will be in the field hoping for a repeat.

Thursday night’s program will likely include qualifying by heat groups or, if more than 32 cars enter, two qualifying groups. Hot laps are scheduled to begin at 5:45 p.m.