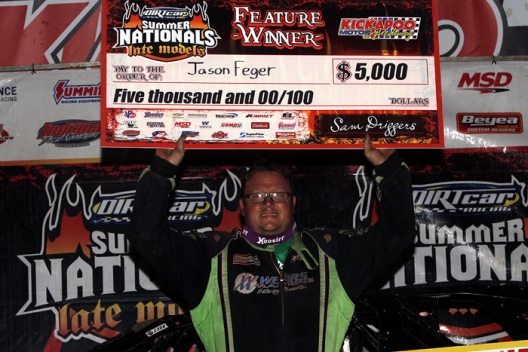 Series points leader Bobby Pierce of Oakwood, Ill., chased the two across the line to finish third, while Bob Gardner of Washington, Ill., — the night’s overall fast qualifier — rallied from 21st to finish fourth after mechanical gremlins earlier in the night kept him from starting his heat race. Paul Stubber of West Bunbury, Australia, completed the top five for the best Summernationals finish of his career.

While Feger led all 40 laps en route to his win, he had to overcome a tricky racing surface to do so. An afternoon rain shower hampered track preparations and drivers had to adjust throughout the night as track officials frequently took breaks in the action to work on the track. And Feger was battling his own gremlins as well. He’s had a rough Summernationals thus far and the 2010 champion wanted to make sure he capitalized on his opportunity to start from the pole.

“It was definitely a little treacherous there, especially early,” said Feger. “The feature wasn’t terrible. It was definitely pretty choppy. Lapped traffic was pretty harry. Maybe the monkey is off our back. I feel like we’ve been chipping away at it. I feel like we’ve been pretty strong in the features. We just haven’t been able to win a heat race or get qualified. It’s a lot easier to start in the front than it is the back against these guys.”

Feger got a great jump at the start, beating Brent Larson of Lake Elmo, Wis., into the first turn before easing up the track as he chased the cushion. As he completed the first lap, Feger already had a .924-second lead over Larson, while Gundaker, Ryan Unzicker and Pierce followed closely behind.

“It was a long race. There was a lot of crate guys here and you can’t blame them,” added Feger. “They showed up trying to get some money. When the track’s like that, it makes it dangerous or not as good as it should be. But I can’t blame them for that. I just tried to be smart and smooth and get through the best I (could) and it worked out. (The cautions were) very nerve wrecking. Especially (because) I went with a harder tire and I knew there were some guys out there with softer tires.

“Yellow after yellow after yellow, I wasn’t wanting to see that. I’d get in a good rhythm and a yellow would come out. Luckily that guy on the last lap got it off the track and in the infield and they didn’t throw the yellow. It definitely was nerve wracking, especially with the luck we’ve been (having). I feel like you’re just giving everybody else more opportunities to get to the front and open yourself up for a slide job or a mistake or something, but it worked out tonight.”

The attrition-filled race was slowed by seven cautions. The yellow waved on lap one, seven, 10, 18, 21, 28 and 33. By the time the final yellow waved for Michael Brown’s spin in turn four, the field had been whittled down to just 10 cars. Brown pulled off the track, leaving just nine to finish the race. Only eight to those nine remained on the lead lap.

Among troubles that bit frontrunners:

• Billy Moyer Jr. broke a shock bracket and slowed to bring out the the fourth caution on lap 18 giving up the fifth spot.

• Larson surrendered the second spot on lap 21 when he got turned around on the back stretch, apparently due to a suspension part failure.

• Unzicker had an oil-line problem forcing him out while the field paced the track during a lap-21 caution. He pitted to the infield where his crew pushed him out of the way. Unzicker said he didn’t think the problem hurt his motor.

“It’s always something on your mind at a racetrack like this,” Gundaker said. “You get to going around there and you’re bouncing and you’re running these motors as hard as they can go. It just shows something, that our maintenance is doing a good job. Our guys work so hard day in and day out and make sure we’ve got the best equipment on and we’re ready to go when we get to the racetrack.”

With a weekly points title on the line and the additional $2,000 bonus money up for grabs to the winner of Midwest Week, which was sponsored by Petroff Towing, Pierce, decided to be a bit more conservative. He was shuffled back to sixth by Moyer Jr. early in the race, but managed to stay in the hunt as drivers fell by the wayside.

“I thought it was gonna be a lot more rough,” said Pierce. “In the heat races there I moved up and I was bouncing like a basketball, so I was trying to take it easy. I was testing out the bottom and I stayed down there a little too long and that outside lane got going and went by me.

“This race for us was more about hanging on … staying in the points chase because heading into tonight this was the last race for the weekly points. I think I was like 35 (points) ahead of Gordy. If I would have broke the car and finished last and he would’ve ended up running top three like he did, then he could’ve beat me in the points. So I was just trying to take it easy. Then on that last caution I got up on the wheel a lot and tried to real ‘em down. There was just nowhere really to go besides the cushion. I’m just glad that we stayed out of trouble.”

The second call for Late Models to head to staging was made at 9:40 p.m. Jason Feger led the field to the track at 9:56 p.m. ... Looking for his first UMP DIRTcar Summernationals victory of the season, Feger will start from the pole along side Brent Larson after drawing that spot in the redraw among the heat race winners. … Michael Brown of West Point, Ind., lost power during his second lap of qualifying, but managed to make the call for the first heat. … Bob Gardner’s crew scrambled to make repairs to his machine after suffering apparent axle failure before his heat race. He’s scheduled to start the feature from the 21st spot after not making the call in the third heat. … A handful of the competitors are utilizing Crate Late Model engines, which has made for a large discrepancy in lap times. The cars finishing from fourth on back in their heats are noticeably slower, which could prove interesting as the lead cars make their way through traffic. … Track officials continue to massage the race surface in between each session, as the surface has proven to be a bit rugged.

After inheriting the pole when overall fast qualifier Bob Gardner scratched with mechanical trouble under the rearend of his machine, Ryan Unzicker beat Brent Larson into turn one on the first lap. Larson of Lake Elmo, Minn., powered back by as they raced down the backstretch, however, and went on to win the third heat. Larson held off Unzicker in lapped traffic over the final two laps to win the race. Unzicker was second, with Logan Moody third and Derrick Hufford fourth.

Polesitter Gordy Gundaker of St. Charles Mo., beat Paul Stubber into turn one on the first lap and led the distance for a flag-to-flag win in the second heat. Stubber finished second, with Devin Gilpin third and Josh McDaniel fourth. The race was slowed by one caution when Eddie Martin spun in turn four on lap four. During the caution, Dustin Nobbe headed to the pit area with a flat tire. Nobbe didn't return and finished seventh.

Sailing into turn one on the high side, Jason Feger of Bloomington, Ill., took the lead on the opening lap and cruised to a win in the first heat race. Feger won by 2.276 seconds ahead of polesitter Bobby Pierce, who fought off early charges from Billy Moyer Jr. Moyer Jr. settled for third, while Jeff Riddell was fourth.

Going out first in the third group, Bob Gardner of Washington, Ill., set the overall fast time among the 22 entrants, stopping the clock at 13.403 seconds. Bobby Pierce of Oakwood, Ill., turned a lap of 13.444 seconds and was the fastest in the first group, while Gordy Gundaker of St. Charles, Mo., went 13.711 as the fastest in the second group. Those three will start from the pole of their respective heats. Joining them on the front row of their heats: Jason Feger (first group); Paul Stubber (second group); and Brent Larson (third group). Ten of the 22 drivers managed to break the 14-second barrier, with Dustin Nobbe's 13.918 the last of the group to get into the 13's.

A pesky rain cloud moved through the area just after 6 p.m., delaying action for about 40 minutes. Late Model drivers were asked to help roll in the track surface and at 7:06 p.m., about an hour behind schedule, drivers took their first laps at full speed. … Shannon Babb of Moweaqua, Ill., and Billy Moyer of Batesville, Ark., are among drivers not in attendance at Kickapoo. Moyer has missed a handful of series events this season, while it’s Babb’s first absence. Timothy Culp of Prattsville, Ark., who ran second on Saturday, and Eric Cooley of Fulton, Miss., who qualified for two of the three races he entered over the weekend, decided to head home as well. … Ryan Unzicker of El Paso, Ill., rejoins the series at Kickapoo. Unzicker, who is sixth in series points, skipped Saturday’s race at Highland, opting instead to run a weekly show at Farmer City, where he finished second behind Mike Spatola. Unzicker is eighth in the Midwest Week weekly points, but won’t be eligible for any bonus money, as drivers must have perfect attendance during the span that each weekly points are tabulated. … Veteran racer Marvin Burton of Georgetown, Ill., arrived late, bringing the total to 22 entries. That ties Plymouth (Ind.) Speedway with the lowest car count through the first four weeks of this year’s Hell Tour. Through 20 events, the series has averaged 31.8 cars per race. ... Devin Gilpin isn't parked with the rest of the haulers in the pit area, as generator problems on his team's hauler forced him to park closer to the campground to utilize the facility's electricity.

Kickapoo Speedway - formerly Vermillion County Speedway — hosts Sunday's 21st round of the UMP DIRTcar Summernationals with a $5,000-to-win purse on the line at the 1/3-mile oval. Along with Super Late Model hot laps and qualifying, there will be three heat races, a consolation race and a 50-lap main event.

Hell Tour drivers have made the 175 overnight haul from Highland (Ill.) Speedway, where points leader Bobby Pierce was victorious on Saturday night.

With Pierce winning Saturday and Shannon Babb of Moweaqua, Ill., slipping to 13th at the finish, the two-time defending series champion has opened up a comfortable 124-point lead as competitors close out the fourth week of their grueling five-week journey. With only three rainouts in the first four weeks, drivers get a welcome break with an off day — or travel day for many — Monday before landing at Hartford (Mich.) Speedway Tuesday to start the final week.

Pierce grabbed the lead in the weekly points battle following Highland as Brandon Sheppard was not in attendance. Petroff Towing is sponsoring Midwest Week and its $5,000 points fund. Midwest Week wraps up today at Kickapoo and Pierce enters the race that will be contested just a stone’s throw from his race shop with a 35-point advantage over Gordy Gundaker of St. Charles, Mo., for the weekly points $2,000 top prize.