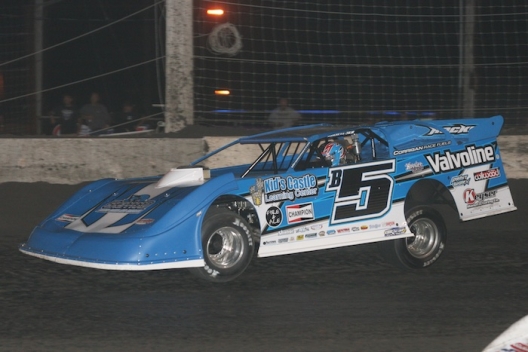 “With about 15 to go, I started seeing some smoke come out of the left front,” Sheppard said. “I wasn’t really sure what to do. I just kept an eye on my oil pressure and I never totally lost oil pressure. The last lap, I started losing a lot more than what I had been. We’re probably going to have to change it, but the motor’s almost lapped out. We got real lucky. If it had been 50, we’d have been blown up and loading her up and going home. Luck’s been on our side.”

Starting outside the front row of Sunday’s feature, Bronson edged ahead of polesitter Ryan Unzicker of El Paso, Ill., to take an early lead. The pair battled side-by-side through the opening laps, with a yellow flag slowing the race on the third circuit when Billy Moyer of Batesville, Ark., slowed off the frontstretch.

Bronson held his lead on the restart, with Sheppard advancing to run in second with fewer than 10 laps complete. As Unzicker and Chub Frank of Bear Lake, Pa., battled for third, the race leaders caught up with the rear of the field on lap 11.

Navigating lapped traffic, Sheppard began closing in on Bronson on lap 22. Two circuits later, Sheppard edged ahead of of the race leader in turns three and four, leading the remaining circuits for his 14th career Summernationals victory.

“(Sheppard) was definitely a little better there at the end,” Bronson said. “I’ve got to thank him a lot. He’s been helping me all day. We’re getting a little bit better here. We’ve just got to put these finishes together. Our car’s been really fast.”

Dropping in with the Summernationals tour before heading out west with the World of Outlaws Craftsman Late Model Series, Frank was pleased with his podium finish after fighting the setup on his car.

“We were way too tight to run up there,” Frank said. “Early on the car was pretty good. The longer we ran, the tighter it got. It got to the point where it wouldn’t even turn through the corners. I couldn’t even pass a couple of them lapped cars at the end. It started to take on a little bit of rubber up on the high side, so it got a
little harder to pass. But for a while there I thought we might be able to get up in there and race for the lead."

Notes: Sheppard notched his 14th career Summernationals victory. He was also the winner of the 2015 and 2011 Hell Tour stops at the Illinois oval. … Each have of Sheppard's three straight victories has come in a different state (Indiana, Missouri and Illinois). ... The lone caution fell on lap three when Billy Moyer slipped off the frontstretch with rear-axle problems. … Fourth-place finisher Bobby Pierce won last year's Hell Tour stop at Lincoln, which ran as a non-points event in August. ... Lincoln hosted a Summernationals event for the 11th straight season.

Outside polesitter Brent Larson slipped ahead of fellow front-row start Bob Gardner in turns three and four to take and early lead, with Gordy Gundaker running in third. A yellow flag waved on lap four when fifth-running Steve Roberts spun on the frontstretch. Larson held his lead on the restart, as second-running Gardner fought off Gundaker. Working around the high side, Brent McKinnon joined the battle for the final transfer spot, but his efforts would not be enough. Larson pulled away to win the consolation, with Gundaker and Gardner rounding out the podium to transfer to the feature.

Taking it three-wide in turns one and two, third-starting Ryan Unzicker shot to the lead on the opening lap. The top four starters held their positions over the field, while Spencer Diercks and Jose Parga battled for the fifth-place spot. Second-running Billy Moyer Jr. challenged Unzicker for the lead on lap seven, but wasn’t able to complete the pass. Unzicker held off Moyer Jr. to win the heat race, with Jason Feger running third. Kolby Vandenbergh ran fourth, with Diercks rounding out the top five.

Front-row starters Tyler Erb and Billy Moyer collided on the first lap, opening the door for third-starting Brandon Sheppard, who shot to the lead down the backstretch. Sheppard stretched his lead at the halfway mark, as Erb attempted to run down second-running Moyer. Sheppard won the heat, with Moyer, Erb, Shannon Babb and Bobby Pierce transferring to the feature.

The Summernationals tour visits Lincoln for the 11th straight season. … Lincoln has had three different winners in its last three Hell Tour events. … Brandon Sheppard of New Berlin, Ill., has won the past two Summernationals events at Plymouth (Ind.) Speedway and Federated Raceway at I-55 in Pevely, Mo. He’s back in his family-owned equipment for Sunday’s show. … World of Outlaws Craftsman Late Model Series regular Chub Frank of Bear Lake, Pa., is among Sunday’s Lincoln entrants. … After a couple of nights away from the tour, Ryan Unzicker of El Paso, Ill., and Jason Feger of Bloomington, Ill., have rejoined Summernationals competitors. … Entering Sunday’s event, Bobby Pierce of Oakwood, Ill., last year’s Lincoln winner, tops the weekly points standing sponsored by U-Pic-A-Part. … Austin Theiss of Hockley, Texas, has made the trip from the Lone Star State to join the Hell Tour at Lincoln; he competed Saturday in Brownstown, Ind.

The UMP DIRTcar Summernationals tour moves to Lincoln Speedway on Sunday for the 15th round of Hell Tour action. The 40-lap feature pays $5,000-to-win.

Current Summernationals points leader Bobby Pierce of Oakwood, Ill., was the winner of last year’s Hell Tour stop at Lincoln. Brandon Sheppard of New Berlin, Ill., who has won the past two Summernationals events, is also a former series winner at Lincoln.

Sunday’s program will include time trials, heat races, consolations (if needed) and the main event. UMP modifieds and USAC midgets will also be in action.